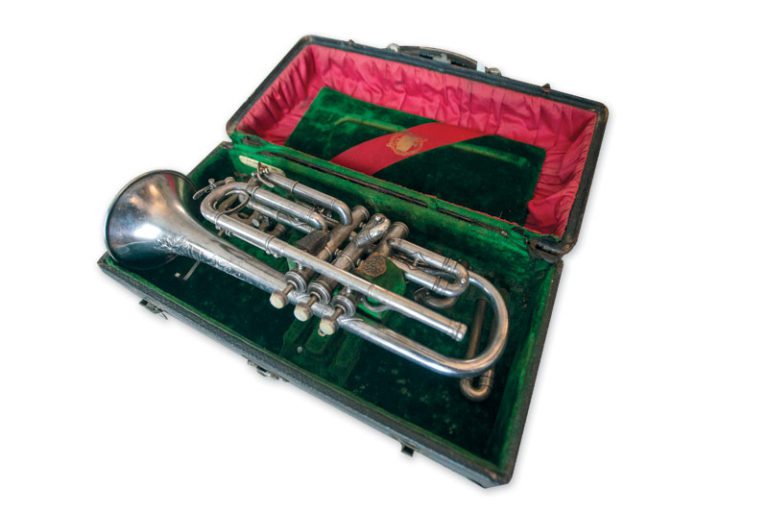 As ubiquitous as it is today, band music did not exist in Frederick County schools until the early 20th century. Back then, the name S. Fenton Harris was literally music to the ears of Frederick’s citizens. The “Father of School Bands,” as he was known, introduced music into Frederick’s school system in 1913.

As a musician, Harris was self-taught. After attending a two-room school near Yellow Springs, he graduated from Boys High School in Frederick in 1903 and earned degrees in various fields through correspondence courses. After teaching himself to play several instruments, he joined the Yellow Springs Band and the Braddock Heights Concert Band. He also joined the choir of the Pleasant Hill Reformed Church in Yellow Springs and became its director.

Around 1906, the Boys High School formed a cadet corps. In 1913, while teaching banking in the school, Harris organized a marching band to help the cadets. He recruited 13 boys, who bought their own uniforms and borrowed instruments to practice weekly after school in the library. He also formed a concert band and gave annual performances for the school and the community. Soon, nearly every high school in Frederick County had a band. Harris continued with his band and orchestra work in the Boys School and Frederick High School until 1940.

Harris’ cornet was made in 1914 by Frank Holton & Company of Chicago, which was a world-class musical instrument manufactory. The cornet is similar to the trumpet but more compact in shape and features a mellower tone.