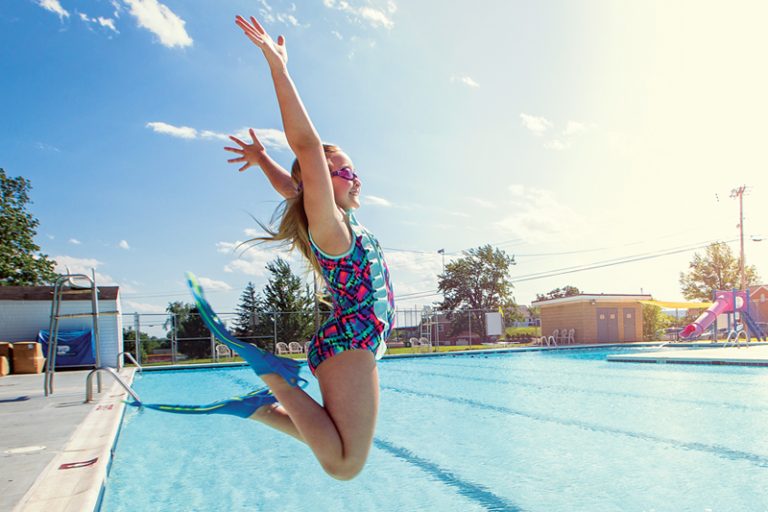 The Timeless Appeal of Public Pools in Summer

It’s a bright summer afternoon in Frederick and the Edward P. Thomas Jr. Memorial Pool in Baker Park is the hottest place to be cool.

Aspiring Michael Phelps and Katie Ledeckys hone their strokes while they dream of standing on an Olympic medal podium someday. Teenagers show off their stylish swimwear and playfully flirt with each other. Boisterous youngsters engage in heated games of Marco Polo and water tag. And the pool deck is packed with sunbathers, many of whom have absolutely no desire to get wet.

Amid all the commotion, lifeguards engage in the timeless art of twirling their whistles, which they occasionally blow with the admonition to “Walk!” or to announce the adult swim break, when the kids empty the pool and fill the lines at the concession stand.

Many baby boomers have fond memories of splashing away the summer days at the local public pool. All you needed was a simple badge or tag that attached to your swimsuit and you’d be set for the day (or the season), allowed to spend endless hours playing, laughing and lounging.

Forty years ago, public pools were as ubiquitous as mood rings and 8-track tape players. But given the high costs associated with swimming pool maintenance and operations, many cities and towns have chosen to close their public pools rather than invest in the high costs of repairs and upgrades.

In all of Frederick County, there are now only three municipal pools, and two of those are within walking distance of each other. In addition to the Thomas pool in Baker Park, the City of Frederick also operates the William R. Diggs Memorial Pool on West All Saints Street. Twelve miles away is the Brunswick City Municipal Pool, adjacent to Brunswick High School.

Despite charging admittance fees, these pools are hardly cash cows for the cities. “I’m not sure that any pool makes a profit anymore,” says Carrie Myers, city clerk for the City of Brunswick. “But it has been the attitude of our mayor, city council and staff that although the pool is not a moneymaker, it is an important service that we provide to our residents.”

The majority of planned communities throughout Frederick have their own pools. Residents’ seasonal usage fees are generally rolled into their annual home-owners’ association (HOA) dues. The Spring Ridge community in Frederick has four pools in its aquatic complex, including a baby pool and lap pool. According to April Rashell, president of the Spring Ridge Conservancy, the pool complex attracted more than 5,200 residents and their guests during the summer of 2016. “The pools are a gathering place for members of our com-munity,” she says. “They are a great amenity and well-utilized. We even have people saying they’d like to see us expand them.”

But she admits that isn’t likely to happen anytime soon, especially since the pools represent 14 percent of the Conservancy’s annual budget. It allotted $246,000 in 2017 to cover the pools’ operating costs. But even with more than 1,400 homeowners paying into the homeowners’ association, the organization will not make money from the pool. “There is no profit in it for us,” she says.

Despite their admission fees and strong attendance numbers, Frederick’s public pools will not turn a profit. A combined annual operating budget of $274,000 for both pools must cover day-to-day maintenance and operation costs, including regular daily upkeep, lifeguard fees, chemicals, filtration, etc.

Then there are the “big ticket” capital expenditures that those who operate pools know lurk beneath the surface each year. When the season ends after Labor Day, the City of Brunswick will need to replace its pool filtration system, which Myers says will cost approximately $16,000.

For Frederick County residents who do not live in planned communities or apartment complexes with their own pools, or for those who may not be able to afford the membership fees that would allow them to use the pools at private facilities such as the YMCA or Hood College, public pools can be a godsend.

Parents and caregivers have long recognized how packing a lunch and taking the kids to the pool is vital to maintaining everyone’s summer sanity. The kids are entertained and expend loads of energy, generally making for earlier and easier bedtimes. “I don’t know what I’d do without it,” says Kyndel Brown, spen-ding an early Saturday in June at the Diggs pool in Frederick with her two children, a niece and nephew. “The kids love it and are so excited to be here. I especially like this pool because it is smaller and the kids feel safe.”

During the summer of 2016, nearly 42,000 people visited the two public pools in the City of Frederick. “There is something for everyone at our pools,” says Nancy Adkins, recreation supervisor for the city’s Parks and Recreation department. “One of the nicest things about our job is coming out to the pools and seeing all the families and different people who love it.”

The city could add another pool in the coming years with the development of the Hargett Farm regional park on the west side of Frederick off of Butterfly Lane. The adopted master concept plan for the park identifies an area for a future aquatic facility, although representatives caution that final plans have not been finalized.

One thing is certain: The demand is there. Adkins points out that it is not unusual to see lines of people waiting for the pool doors to open each day, kids loaded down with their water wings and goggles and adults loaded down with pool bags full of towels and sunscreen. “We are proud of the fact that we can provide an aquatic experience that is affordable, accessible and open to everyone in the community,” she says.

Water-safety skills are critical for all Americans, but are especially critical for children from lower-income families. For young people whose families cannot afford private pool memberships, public pools provide an opportunity to become comfortable with swimming, a skill that may someday save their lives—or the life of someone else.

The same study revealed that children who qualify for free and reduced-price meal programs are 63 percent less likely to have good swimming ability and more than 79 percent of children in families with annual household income less than $50,000 have no/low swimming ability.

To help reverse those trends and ensure that all children have the oppor-tunity to become comfort-able in the water, the City of Frederick offers what it calls a Reduced Pool Admission Fee program. Children under the age 18 can enter the pools for $1 if they meet qualifying criteria, which include living in one of the city’s public housing communities or eligibility for free and reduced-price meals from Frederick County Public Schools.

Adkins also points out that the city offers swim lessons all summer long at the two Frederick pools in varying session lengths and for skill levels, from beginners to advanced. “And all of our lessons include a special water safety day where students learn about things like boating safety and diving safety,” she adds.

The costs of swim lessons vary, but city residents pay half of what non-residents pay. Residents also pay less than non-city residents for admission to the pool. But with daily rates that start at $3 for city residents, discounted multi-use punch cards and season passes, as well as half-price family nights on Sunday evenings, the goal is to try to make the pools accessible for everyone. There are also reduced rates for seniors, people with disabilities and single-parent households.

There’s no denying pools are pricey to operate, especially for municipal governments struggling to meet other constituent needs. But for those who have fond memories of meeting new friends (per-haps even a first love) at the pool, or who are among those splashing and laughing amid the water features and tumble buckets of today’s amenity-laden “aquaplexes,” it’s hard to image a summer without them.

Sisters Cate and Julia Osborne have grown up spending many summer days at one of the three pools in their Whittier neighbor-hood, where they play games, have contests with friends and, whether they realize it or not, add to their database of childhood memories.

“It’s fun and relaxing,” says Julia, who will be 12 this summer. If she’s not in the pool, chances are she’s on the playground next door, laughing and hanging out with her friends, often while waiting for the adult swim period to end.

“We pack the cooler and spend hours there,” Cate says. Even at the ripe old age of 14, she finds herself reminiscing about the times they’ve ordered pizza and had it delivered to the pool for their own version of waterfront dining.

Cate and Julia admit that the neighborhood pool is a great place to connect with their friends, but they also wish they had a pool in their own backyard. Their mother, Margaret, however, reminds them that they wouldn’t have the opportunity to interact with their many friends if they did. Besides, she says, “I grew up with a backyard pool and I know how much work they are. Our neighborhood pool is just around the corner and it’s perfect.”