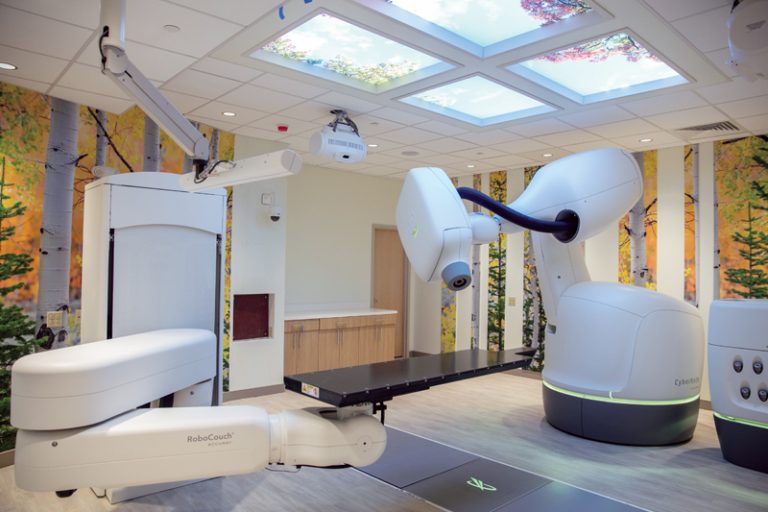 Last month, Frederick Regional Health System’s Dr. Gregory Gagnon was treating a patient with acoustic neuroma, an uncommon, slow-growing benign tumor found on a nerve that links the inner ear to the brain.

One treatment option is to perform an eight-hour surgery to remove the tumor, prompting a week-long hospital stay with a portion spent in the intensive-care unit, followed by several weeks of rehabilitation. The alternative is to use CyberKnife—a non-invasive robotic system that delivers high doses of radiation to tumors.

Gagnon’s patient received three CyberKnife treatments where she was able to lie down, rest for 30 minutes each session and go back to work after. “It can’t be a bigger difference in quality of life or cost, really, when you factor in the cost of neurosurgery and actually cutting it out … and if you include the days lost from work and all that, it becomes even more,” he says. “It can’t be a more dramatic difference than that.”

CyberKnife is not a new technology. In fact, the hospital was one of the first in the region to offer the treatment starting a decade ago. Dr. Mark Soberman, medical director for oncology, says having the cutting-edge therapy is unique for a community hospital to offer its patients.

Hospital staff are working toward the opening this month of  the $21.2-million James M. Stockman Cancer Institute on their Rose Hill campus. As part of a $10.5-million investment in all new radiation oncology equipment, a state-of-the-art CyberKnife will also be a part of the center. “Everything has a service life,”

Soberman says. “All of our [radiation machines] are around 10 years old and they still work quite well but technology has advanced and no piece of equipment lasts forever. There’s also a significant cost associated with moving complicated and large equipment like [radiation machines] and CyberKnife machines across town, so when we looked at what new technologies were available, the fact that we had really gotten to the point where these [machines] were beginning to get toward the

end of their service life and the cost associated with moving them, it made absolute sense to … replace all the radiation oncology equipment.”

Dustin Simonson, a medical physicist, works to make sure the CyberKnife is operating properly by delivering the exact prescribed radiation dose to a precise location. He also works with physicians to create computerized patient treatment planning. “We have a virtual CyberKnife in the computer and we do some planning on it,” he says. “We create … plans and determine the best one to treat the patients working with the physician and then that is the one we use to treat the patient.”

Simonson says patients will benefit from the new, upgraded CyberKnife. “The new device will expand the range of tumors that CyberKnife can treat,” he says. “CyberKnife has always been excellent at treating smaller tumors to very, very high doses. Now, with the new device, it’s got a new, more robust robotic arm. [There is] a new aperture, which is how the radiation gets shaped, and that is allowing us to treat larger tumors than we’ve ever been able to do before.” The new technology will also feature a robotic couch—basically a flat-top table—for patients to lie on. “This couch will position the patient under the machine for treatment. One of the most time-consuming portions of the CyberKnife treatment is getting the patient properly aligned, getting them exactly where they need to be before the treatment starts. This robotic couch will much more quickly get them precisely where they need to be so that will be less time the patient needs to be on the couch, and quicker the delivery will be.”

When Gagnon first started performing CyberKnife treatments 15 years ago, each session might last two to three hours. Today, those times are down to an average of 30 to 40 minutes. He estimates the numbers will go down even more with the new CyberKnife.

While standard radiation treatments average five days a week for four to six weeks, CyberKnife is usually three to five treatments over three to five consecutive days. “It delivers a much higher dose of radiation to the tissue over a much more narrow beam and it does so with minimal toxicity to the surrounding tissues so there are less side effects from the treatment, less spill over to adjacent tissues and organs, and more effective treatment,” Soberman says. “The reason they call it CyberKnife is because it uses robotic and computer technology—that is the cyber part and knife, because in many ways it is almost as precise as a surgeon’s scalpel.”

The technology is typically used to treat patients who aren’t candidates for surgeries due to poor health and other factors. CyberKnife’s speciality is its ability to track “moving” tumors within a fraction of a millimeter, such as those in the lungs that move during breathing. “It really does an impressive job,” Gagnon says. “If the patient … has a big sigh or something, you will see the robot take this big sigh with the patient. If the patient coughs, it will actually start jerking following the cough. It is really impressive when you see it follow a tumor moving through the breathing cycle. It gives you this weird sort of feeling that is sort of a living thing, which is kind of the mark of a good robot they give you that eerie feeling that it is alive.”

Having the CyberKnife technology keeps Frederick Regional Health System at the forefront of radiation therapy treatments, according to Simonson. “This is leading-edge technology that you will find at major academic institutions and the ability to have that here in Frederick is really a wonderful benefit for the community,” he says.