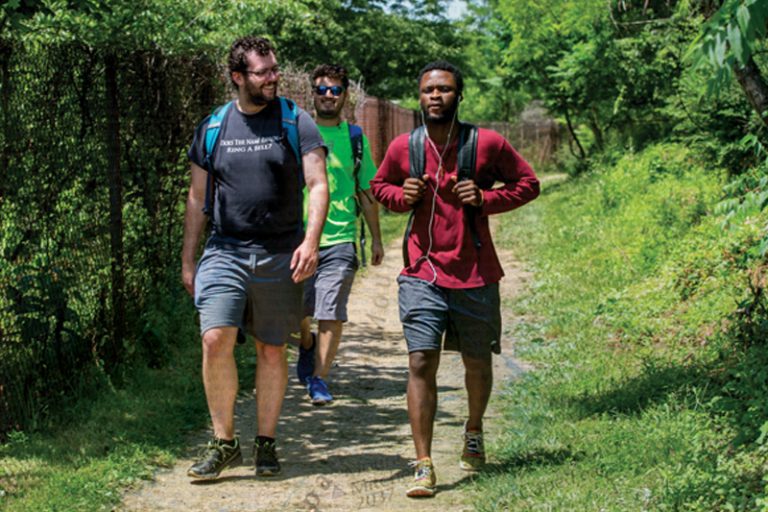 Are Too Many People Hiking the Appalachian Trail?

A Frederick couple takes their dog most weekends for a walk along the Appalachian Trail. A father in Silver Spring meets his son who lives in Hagerstown for a hike up to Annapolis Rocks. Two men from Baltimore are spending a weekend on the trail.

Individually, these trail users are of little concern. But collectively they raise an important issue for the people responsible for maintaining the trail: How many people use it, how many are hiking long stretches, how many are out for a day’s walk? And how does this traffic affect the normal wear and tear of the trail?

The Maryland Department of Natural Resources needs that data, says Mary Ironside, park manager of the South Mountain Recreation Area.“It’s pretty important to maintaining the resource and the integrity of the trail to understand what the visitation levels are,” Ironside says.

Anecdotal evidence suggests more people are on the trail every year. The Appalachian Trail Conservancy, a volunteer group that works to preserve the trail, maintains a list of “2,000-milers”—people who have hiked the entire Appalachian Trail during the previous 12 months. Over the years, that number has grown dramatically.

The numbers, however, can be deceiving. Hikers tell the conservancy where they’ve hiked based on an honor system. And Bowman allow- ed that there could be some “yellow blazing” involved. Hikers follow the trail, sticking close to “white blazes” painted on trees. Some folks might decide to skip parts and motor to another section, following those yellow stripes in the middle of the road.

And some hikers want to stay off the grid and not report their hikes. Bowman says the conservancy respects that decision.

“It’s hard to get a good idea of the number of people who use the park. Some are walking their dogs. Some are joggers. Some are on an overnight hike. People access the park in different ways,” says Todd Remaley, chief ranger of the Appalachian National Scenic Trail.

“WE HAVE CERTAINLY SEEN IMPACTS“

The trail runs 2,175 miles from Springer Mountain in Georgia to Mount Katahdin in Maine, passing through 14 states. The trail was completed in 1937 by the Civilian Conservation Corps, according to the National Park Service.

About 41 miles of the trail pass through Maryland, roughly along the border between Frederick and Washington counties, following the ridge from Weverton Cliffs at the Potomac River, then continuing north to the Pennsylvania line near High Rock. “It’s really a narrow dirt path through some pretty country,” Remaley says.

The trail also leads to Annapolis Rocks, an outcropping with westward vistas of Washington County. And then there’s the Devil’s Race Course, a field of boulders that seems out of place along the tree-lined canopy of northwestern Frederick County.

And every mile of the trail offers solitude and a primitive experience. “We try to preserve that everywhere as much as we can,” Remaley says.

And as more people hike along the Appalachian Trail, the rangers who safeguard it have seen erosion, vegetation giving way to bare ground, exposed tree roots, illegal campsites, damage from illegal fire rings and scars on trees.

“It’s a challenge we welcome because we’re glad people want to use the trail,” says Remaley, who “through-hiked” the trail—from Georgia to Maine—27 years ago.

So for park rangers, the number of people using the Appalachian Trail is very important. “We have certainly seen impacts. We’re trying to monitor the resource,” Remaley says.

HOW POPULAR HAS HIKING BECOME?

One way of monitoring trail traffic is counting vehicles at trail parking lots. On May 20, a pretty Saturday, 90 cars were parked near the trailhead on U.S. 40. That included automobiles crammed into the small parking lot as well as about two dozen vehicles squeezed between a pair of “No Parking” signs on the road.

The park also employs ridge runners, paid employees who walk and camp along the Mary-land portion of the trail and count heads on their hikes, Ironside says.“We don’t feel that’s an accurate reflection because we’re only getting a few areas of the Appalachian Trail,” she says.

So rangers are now taking a high-tech approach on what is decidedly low-tech recreation through the use of electronic trail counters, Ironside says. A laser beam is fired across the trail, and every time the beam is broken, a counter ticks off.

Trail counters, she says, are not cameras. No one is taking pictures of anyone. “People won’t even notice they’re there,” she says. Two counters have been installed, and at least two others are planned, Ironside says.

The counters are not cheap, she says, costing $1,200 and up, but the data will greatly help the people who take on the responsibility of caring for the trail. “We are going to understand the increase in popularity as a recreational experience. How popular has hiking become?” Ironside says.

“We’re going to use the information to understand how many people are impacting the resource, and what is our carrying capacity,” she adds. “So if we see numbers skyrocket over the next few years and we also simultaneously see damage to the trail or overuse, or vegetation being crushed, then we can adequately gain an understanding of where we might need to go toward best practices.”

Officials plan to target areas where hikers are walking straight through. And once the data has been collected, DNR plans to do a sampling of just spending an hour or two to ask people where they’re going, she says. With that number, rangers will have a sample that will help them determine who is out for a short stroll and who’s on a lengthy hike.

“The parks, and in particular the Appalachian Trail, are about recreation, as much as it is for recreation — taking the time for pausing life, not hearing a phone ringing for a couple of days,” Remaley says. He has heard of veterans who have taken to the trail because they are “walking off the war.”

“The trail will boil you down to your basics,” Remaley says.