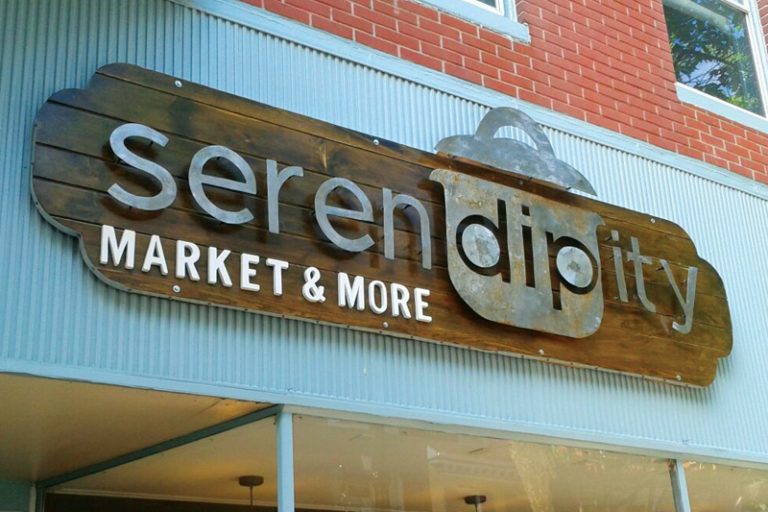 First came the name then came the biscuit business. For years Lesley Riley’s friends have called her “Ma Biscuit” and two years ago when she decided to go into the food business—while still working two full-time jobs—biscuits were the way to go. “I used to own a restaurant and made sweet potato biscuits,” says the owner of Mama Biscuit’s Gourmet Biscuits. The online business—with an additional presence at Whole Foods Market and Wegmans—has outgrown its original space and recently relocated to 7309 Grove Road.

“I sold my first biscuit on May 28, 2015,” Riley says, even recalling the customer’s name. Her formula for an awesome biscuit is a combination of her grandmother’s recipe and some tinkering of her own. Her line includes both savory and sweet biscuits, as well as a gluten-free version. “It’s handmade everything,” she says.

Riley discovered that making a delicious product is just part of the process. “I had my packaging woes,” she says, hiring a brand specialist to help. She also has three fans living across the country who rate how the biscuits hold up to shipping and they offer feedback on new flavors. The company, which has seven part-time employees, will be featured on the QVC shopping network in October. “Biscuits are a familiar feeling,” Riley says. “They remind people of their grandmothers.” www.mamabiscuit.com

“The best part is that they’re made in-house and are fresh all day,” says Kris Schmidt, district manager for Krispy Kreme, talking about the popularity of the treatthat has been around for 80 years. Frederick recently gained a Krispy Kreme store at 5020 Buckeystown Pike. With an average of 24 different types of doughnuts, customers can come into the store for takeout or use the drive-through. Hot Light hours are 6 a.m.-10 a.m. and 4 p.m.-10 p.m. daily. www.krispykreme.com

This time when Brandon Sumblin appeared on the Food Network he brought along his wife, Tiera, and mother-in-law, Blanch Henry. The trio, of Serenity Tea Room & Fine Dining, 162 W. Patrick St., recently competed and won on Guy’s Grocery Games. The show pitted the family against three siblings who run an Asian food truck.

Contestants on the show speed through the grocery aisles and prepare a meal within 30 minutes. Blanch made a pork dish that also had to include pretzels (she crushed them and used as breading) and Brandon made his signature shrimp and grits. Tiera finished by making peach crumble and cardamom ice cream. The family snagged a $16,000 prize, which they plan to put into their business. Last year Brandon won on another Food Network show, Cooks Vs. Cons. www.serenitytearoom.com

Enjoying a view of horses on a beautiful farm is made even more enjoyable with wine—available at Hidden Hills Farm and Vineyard, 7550 Green Valley Road. Tastings are available by appointment “to provide a personal experience with folks receiving our full attention,” says general manager Barbry Williams. The owner is Robin Sagoskin.

Events may be held at the farm—a recent ribbon-cutting with a demonstration by the Hood College equestrian team drew 300 people—but the main focus is smaller gatherings. Hidden Hills features four varieties of whites with three red wines are planned. www.hiddenhillsfarmandvineyard.com

A Market and More

For years, Downtown residents have lobbied for a grocery store. Coming to the rescue in its own style is Serendipity Market & More, 14 E. Patrick St., where you can drop in for a dozen eggs, loaf of bread, cleaning supplies, a box of pasta and other necessities of life, while at the same time grabbing a sandwich, cup of coffee or entrée for that night’s dinner—or, a bouquet of fresh-cut flowers for the table.

Owners Diane Branson and Brittany Grimm originally planned to operate a spice shop, but once they saw the abundance of space decided to think bigger. The women are committed to supporting local farmers and growers and the store will carry their products.

Eventually Serendipity will have a kitchen and a chef, with ingredients coming from what’s on the store’s shelves. “We’ll be our own supplier,” Branson says. The store is reminiscent of an old-time general store, not only with the wide variety of stock and the pressed-tin ceilings, but also because of the way customers are welcome to sit and relax for a bit. There’s a large space for book club meetings, artist displays and anything else the community can dream up. Follow them on Facebook.

Snacks on the Creek

In an effort to bring more pedestrians into the area of the Carroll Creek Linear Park right off South Market Street, the Downtown Frederick Partnership is sponsoring food vendors at Carroll Creek Trellis.  “It’s a good use of the space that has water and power and the trellis,” says Kara Norman, the partnership’s executive director.

The space will be used on weekends through September, alternating among: the North Market Pop Shop with sodas, snacks and candy; Frederick Fudge & Ice Cream, which will be selling Italian ice; and The Wine Kitchen, featuring gourmet grilled cheese sandwiches. www.downtownfrederick.org