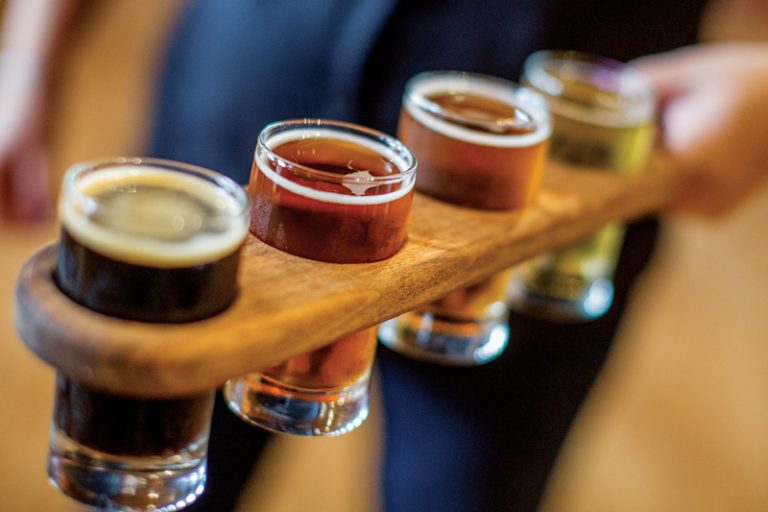 Beer aficionados—you know the type—love to stand toe-to-toe with wine and whiskey connoisseurs, detailing the merits of their favored beverage. Surely, not all beer is worth savoring, but surging demand for artisan-made brews and food products has unraveled beer’s once-lowly image. Brewpubs, such as Barley & Hops on Urbana Pike, are turning humble yeast and grain (and a few other ingredients) into consumable art.

Lori Keough took over the established business in 2016, making Barley & Hops Maryland’s first woman-owned craft brewery. Keough’s parents and grandparents ran restaurants, so the endeavor is a return to her family’s roots. “When the craft beer market first started, I gravitated to it immediately.” She’s excited to put her stamp on the place and making beer the star. Head brewer Eric Gleason is also happy to take the baton and run; he started home brewing in 2011 and realized he found his calling.

The many medals above the bar are a testament to their accomplishments. In December, Barley & Hops participated in Maryland’s Comptroller’s Cup craft beer competition. Gleason’s original “Ambulette,” a Belgian pale ale, took “Best in Show,” first place for best pale ale and a gold medal in its subcategory. Overall, Barley & Hops earned seven gold medals, plus four silvers and five bronzes, out of 20 entries. Patrons can taste the winning recipe, along with three other standard house beers: FSK IPA, Catoctin Clear Lager and Annapolis Rocks Pale Ale, plus many seasonals. Can’t decide? A flight includes the taster’s choice of four 5-ounce beer selections. Mini 1-ounce samples are a dollar.

Keough is quick to mention that a robust beer menu is one of the biggest changes at B&H. “Formerly, there were only four kinds of beer, with seasonal [editions]. Now we have 14 taps and 13 of those are ours. The other is a local cider, which is gluten-free.” She lauds Gleason’s creativity. “He doesn’t like to make the same beer twice … but pretty much anything he puts out, I like. He is that good.”

Barley & Hops uses a 15-barrel brewery system. (A barrel is 31 gallons and a keg is ½ barrel.) “I average 75 barrels a month,” says Gleason. Each unique recipe is meticulously planned. “My philosophy is to make something seasonal, fresh and compelling.” He’s happy to give tours, pointing out fermenters and brite tanks while chatting about his beloved craft, when time allows. “I like a beer that’s technically made well,” he continues, noting that his style falls between the extremes of traditional and experimental brewing. “I believe in subtlety and nuance. It’s got to be a little bit sexy.”

This year, the craft beer industry is trending toward a branch of the IPA tree. “There is this new hazy, crazy style that everybody’s making.” Gleason explains, “It’s a New England-style IPA. They tend to be cloudy, a little milk-shaky and somewhat sweet.”

“We’re a brewpub, so we try to have a lot of appetizers,” Howard says. “The poutine is a big seller.” Poutine is a hearty French-Canadian standard consisting of French fries, chewy cheese curds and silky stout gravy. It’s famous for its “day after” curative powers. “I’m a big fan of mussels, too. Sometimes we do variations of those on the happy hour menu.” Happy hour runs from 3 to 7 p.m. Tuesday through Friday and all day Monday. Each Sunday a new, weekly happy hour menu debuts with specials all day at the bar.

Keough points out that the 169-seat restaurant has a gluten-free menu and a kids’ menu. (Children 10 and under eat free on Sundays.) She says, “I think you’ll find a family atmosphere at most brewpubs today. It’s a change in the culture. Craft beer is a different market. It’s not like the bar scene. People are not here to get drunk.” It’s more about savoring and socializing.

Plans are underway to redesign the space, with minimal service interruptions. Keough engaged designer Rhonda McLaughlin, who worked with restaurants such as VOLT and Firestone’s, for the task. For now, the walls sport colorful house-designed posters showcasing each new beer. Keough promises the new decor will be dramatically different, a bit rustic and casual. She is also introducing a crowler, a 32-ounce recyclable can, half the size of a traditional growler, that keeps beer fresh longer. The restaurant’s Mug Club rewards members with discounts, free food and priority invitations.

“We want people to understand that this is not the place it used to be,” Gleason says. “Those three buzzwords —seasonal, fresh and compelling—apply across the board. It’s not just the beer. It’s the food and the service, the live music, everything.”