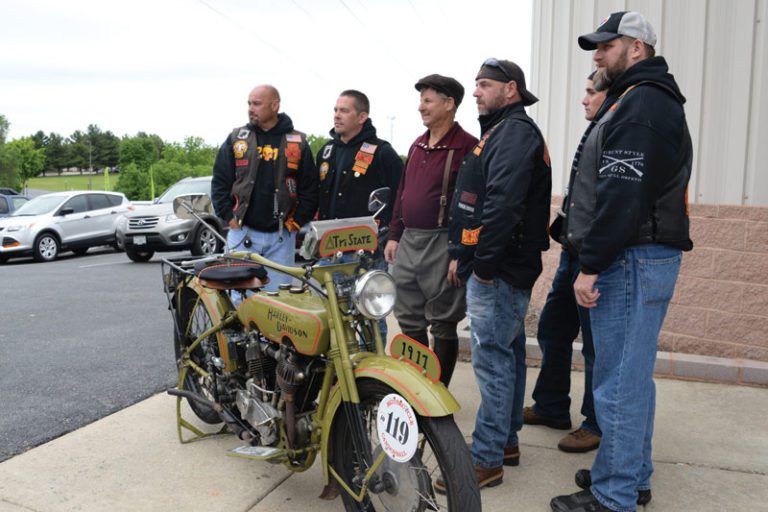 Just off the latest Cannonball Run, Bert Miskell Sr. is ready for the next one in 2018—but this time he hopes to avoid the mechanical breakdown of his motorcycle that kept him from finishing the 15-day coast-to-coast endurance ride.

This year’s event, running for 3,006 miles between Atlantic City, N.J., and Carlsbad, Calif., had Miskell riding a 1915 Harley-Davidson Model F. The group included 100 bikes required to be more than 100 years old. Unfortunately, “We broke down the second day in Pennsylvania,” says Miskell, whose company, TriState Home Services, sponsored his entry in the run.

Sidelined for two-and-a-half days while the motorcycle was being repaired, “we caught up with them in Bloomington, Ind.,” Miskell says. But for a man who gladly rides a bike that has no rear shocks and just a little bit of give in the seat, this setback became an opportunity to make something good out of a disappointment.

“We decided to have a reverse mini-Cannonball and tie some charities to it,” Miskell says, joining with a group of U.S. Marines called the Leathernecks Black Sheep Chapter. The bikers left Bloomington and wound their way back to Frederick over three days and 600 miles, ending with a party at TriState’s headquarters on Wormans Mill Court. In addition to collecting canned food for local food banks, they also raised money for Wreaths Across America—a cause that lays wreaths at Arlington National Cemetery each December—and Homes for Troops, which helps veterans with housing. Additionally, money was given to a college fund for the children of one of the Leathernecks who recently died in an accident.

Miskell says the next Cannonball Run will go between Portland, Maine and Portland, Ore. “We have a 1913 bike that we’re going to enter,” he says. “We have our two spots.”

Miskell enjoyed participating in the legendary run, despite the setback—after all, what’s not to like about an open highway with beautiful scenery where you’re doing a leisurely 45 to 50 mph? “At that speed you can easily steer around the bumps,” he says. www.tristatehomeservices.com