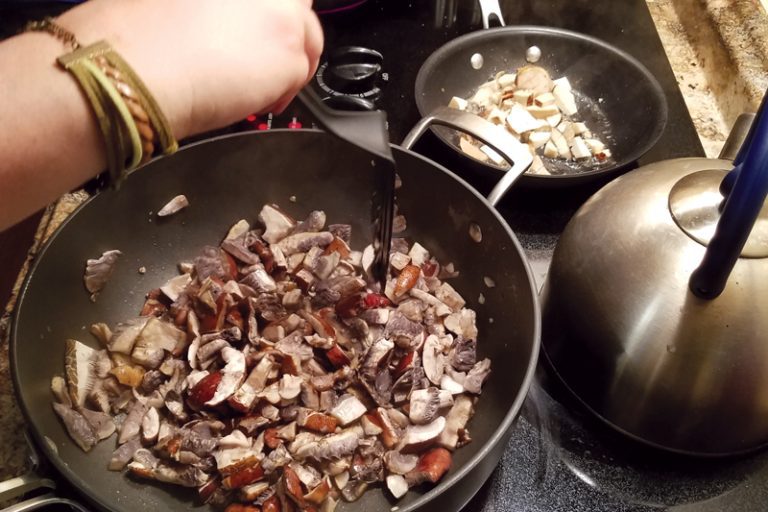 We are all hunters. Even without guns, spears or bows, we are driven to seek and acquire the things that make life worth living. The target needn’t be tangible. Knowledge, emotional connection, higher purpose or satisfaction are worthy prizes. Certainly, when it comes to food, this elemental compulsion cannot be denied. Some “hunt” for deals at the supermarket, ready to pounce on fleeting specials. But in such an environment, it’s easy to forget how far removed from nature some “edible” products are.

Human adaptability enables us to conquer inhospitable environments. Towering cities provide shelter and mega-marts with complex supply systems to satisfy every material need. One farm can feed thousands. That’s undeniably awesome. But the mental buffer between modern life and our natural origins can be a hindrance, too. What good is progress if we’d starve without Cap’n Crunch and microwavable dinners? Comfortable and well-fed, the human animal still hungers for wild spaces.

This longing brings us to Fox Haven Farm and Learning Center in Jefferson, which encourages people to “reconnect with nature.” It is a preserve, ecological retreat and wildlife sanctuary focused on revitalizing people, as well as places. Chance led us to a class on mushroom hunting there. We love mushrooms. We find them in the produce aisle wrapped in cellophane. This day is different. Strolling less than a mile down Poffenberger Road, our group encounters dozens of different specimens, just steps off the gravel. Wood Ear, Turkey Tail, Chestnut Bolete, Crown Tipped Coral and Dead Man’s Fingers were eye openers. They are all new to me and, surprisingly, edible. Our leader, Michael Weese, is a regional expert who creates mushroom growing kits and healthy tinctures for his business, Mushroomlife. He sagely notes that “edible” doesn’t always mean “tasty.”

Weese cautions, “Never eat a mushroom unless you are 100 percent sure what it is.” Every teacher, video and book I’ve encountered repeats the warning. Some toxic mushrooms cause intestinal distress, but some will kill you. Instantly. Painfully. Some people don’t do well with mushrooms at all. It’s generally advised, when you try a new variety, to cook it well and don’t eat more than one type at a time. Raw mushrooms are largely indigestible.

Dave Russell is a Hagerstown-based photographer who started a second business, Appalachian Mushrooms, in 2016. He joined Weese’s Facebook group, Maryland Mushrooms and Mycology, after getting hooked. Such groups share insight and encouragement, especially for those who can’t attend a hands-on class. He says, “People think everything is poisonous … so I did a lot of research online and reading books.” He started with highly desirable and elusive morels. “There are false morels, but it’s pretty easy to identify when you slice them. Morels are hollow.”

grows Oyster mushrooms (Pleurotus), culled locally, and is learning to cultivate Shiitake (Lentinus) and Reishi (Ganoderma Lucidum). His whole family helps. “It can get confusing,” he says, making a case for learning Latin names to avoid confusion among nicknames. “Hen-of-the-Woods is different than Chicken-of-the-Woods. … Even morels (Morchella) have different names. People alternately call them ‘Miracles’ and ‘Woodland fish.’” Russell helpfully posted his photo journal to the Facebook group. It includes professional-grade pictures of his edible local finds, along with common and proper names, and notes on taste.

Mike Hubbard and Seth Long also found a mushroom connection through Facebook. Hubbard started the group Western Maryland Morels, but accepts fellow fungi-philes from throughout the state and southern Pennsylvania. He found his first morel in Cumberland while on a lunch break. “It was about a half-inch tall,” he says, “poking out from under a tulip poplar.” This spring he found one sprouting from a gravel patch against a metal building at work. Last year, he found them peeking out of three inches of snow. It proves, if you look hard enough, there is something growing all year.

“I love the woods,” Hubbard says. “I will spend as much free time as I have every year hunting, fishing and hunting mushrooms.” He admits he’s not a huge fan of eating mushrooms, but readily shares his haul with friends. For Hubbard, socializing and enjoying nature are just as valuable as any find. In the spirit of camaraderie,his group holds an annual contest for the biggest morel.

Long, who works for the Sierra Club in Washington, D.C., comes from a long line of Frederick County mushroom hunters. He learned from his grandparents, who learned from theirs. “Finding mushrooms is like an Easter egg hunt. There’s a surprise of food or something colorful. It is ephemeral.” Says Long, “My great-grandfather [orchardist Samuel Pryor] used to take my dad out of school to hunt mushrooms.”

These days, Long finds himself closer to Rock Creek Park or the woods around D.C. rather than his ancestral stomping grounds near Thurmont, where much of the preserved land was reclaimed from logging or farming. Areas near the nation’s capital were protected earlier. “The ecosystems are older. The trees are older, bigger,” says Long. “That makes a good habitat for mushrooms.” But mushrooms like old orchards, too. Certain mushrooms thrive with certain trees. “Maitake come back on the same oak trees every year. … Lion’s Mane seems to like beech.” Long reminds us that many public lands have restrictions on foraging. It’s always good manners to get permission to hunt on private land, too.

Learning about trees and soil types, recognizing the importance of slope, sun and water, as well as good luck, are hallmarks of the best hunters. Lacey Walker is in charge of the community garden and programs at Fox Haven Farm. She says, “That’s one of the things I love about mushrooms. You get to learn about the entire environment.” Programs at the farm promote stewardship and range from composting and closed-loop systems to beekeeping, fermenting and herbs for health, with conscientiousness as the common thread. According to Walker, it’s a chance to reconnect and imagine new futures.

When tromping through the woods isn’t feasible, start with your own backyard. Bonus Wine Cap mushrooms pop out of the garden mulch at Fox Haven. Wild purslane, plantain, garlic-mustard, nettles, wood sorrel and onions are abundant edible weeds. And humble dandelions can be the stars of a harvest for salad, tea, wine or sautés. Their yellow petals taste like honey. (Just be sure to collect edibles away from roads and sprayed areas.)

Michael Judd is a local author and permaculture expert. He helps people transform greenspaces around their homes and businesses into lusciously productive gardens. “There are lots of good edible mushrooms growing throughout our region … because we have high humidity and moisture most years. … They do well here naturally. In permaculture, we observe what’s doing well and we go with the flow.” The outdoor space at VOLT restaurant in Downtown Frederick is an example of his work.

Maybe the best lesson we can learn from awakening the hunter within is that body, mind, and spirit all need nourishment. Long knows the score: “We are so lucky to have these woods in this environment and the Earth to enjoy.”