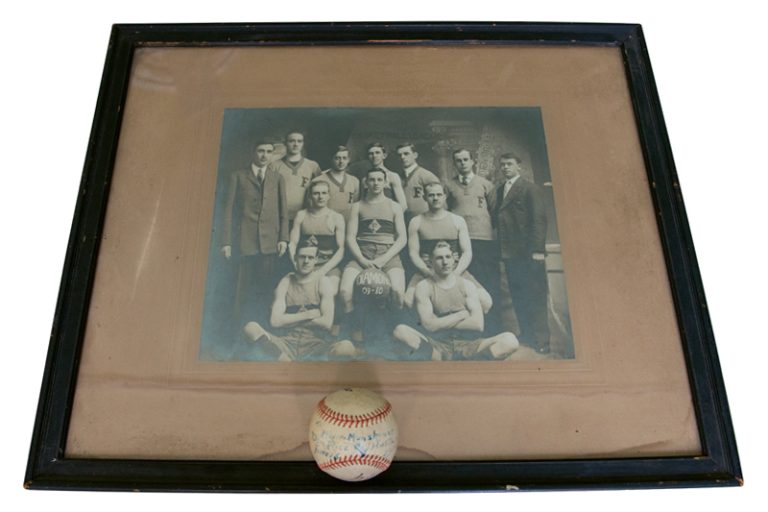 The Hustlers made their professional debut on May 27, 1915, as part of the Class D Blue Ridge League. Frederick Mayor Lewis Fraley declared the occasion a half-day holiday so people could leave work early and watch the game. Three thousand fans turned up at Agricultural Park (today’s Frederick Fairgrounds) to watch the Hustlers compete with the Martinsburg (W.Va.) Champs. The game was a resounding victory for the Hustlers, who went on to win 17 of their first 20 games of the season. Over the years, the Hustlers changed hands, went in and out of existence, and acquired various names. For a time they were a minor league team of the Cleveland Indians called the Warriors.

This baseball was signed to Col. Elmer Munshower on June 16, 1950, when he was mayor of Frederick. According to Munshower’s granddaughter, Sandy Fisher, who donated this baseball and several photographs to Heritage Frederick in 2016, he kept the baseball and other mementos in his home on 271 W. Patrick St. until his death in 1976.

Munshower participated in many sports in his youth. He is pictured here (first row, far right) with the basketball league of what was likely to be the YMCA, circa 1910.