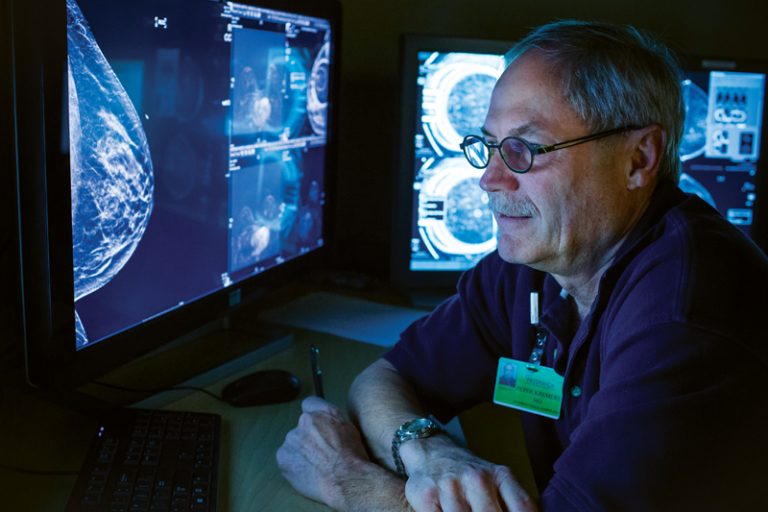 Dr. Susan Bahl recalls a patient who came to her with a lump in her breast five years ago. “When I initially met her, I took her family history and there was a lot of cancer on her father’s side of the family,” she says. “I said to her, ‘Have you ever had genetic testing before?’ She said, ‘No. I was told these [cancer] genes don’t get transmitted on the dad’s side of the family.’ Well, that is an incorrect statement, first of all. It’s not her fault. No one had ever asked her about [her family history].”

The woman would test positive for a gene that causes breast cancer and the lump later diagnosed as Stage 3. “The way these genes work, if we have patients we know have these genes in advance, we follow them very closely,” says Bahl, a surgeon in Frederick Memorial Hospital’s Center for Breast Care. “… We do whatever we can to prevent breast cancer.”

One tool the hospital is using to help women better understand their genetic and lifetime risk for breast cancer is a risk-calculation software program. When women come in for a mammogram, they are given a secure wireless tablet and asked to answer some questions about their family and personal history. Have you ever had

a biopsy of the breast? If so, have you ever had an abnormal result? How many children have you had? How old were you when you had children? Who has had cancer in your family? The questions take about 10 to 15 minutes to complete and lead the clinical team down different paths based on the answers.

Bahl’s patient, who was diagnosed years before the risk-calculation program, is healthy now, but she required surgery and extensive chemotherapy and radiation sessions. “When cancer is diagnosed in an advanced stage, we have to give them advanced treatments,” she says. “If they are diagnosed in an early stage, that could have saved her from a lot of complicated treatments. … Her cancer really could have been prevented, [or] if not prevented, caught at an earlier stage, if this program was in place. Whenever I talk about this program, I always think about that patient of mine because she is the reason we have the program.”

Dr. Peter Kremers, an FMH radiologist, was involved with choosing the risk-assessment tool, which the hospital started using in December 2015. “There are different models that are out there for assessing the patient’s individual lifetime risk as well as their risk of having a genetic mutation,” he says. “Basically, this is a tool that can be used at the point of service. In our case, when they show up for their mammogram. This can be done in a physician’s office, but what we noticed was there was a lack of that work being done in the primary care’s office. Since we capture all these women when they come in for a mammogram, we have an opportunity to ask them these questions.” The results are immediately calculated through the program. “Patients are given that information when they leave so they know they are potentially at higher risk and the clinicians are given that information as well,” Kremers says.

About one in eight women in the United States will develop breast cancer over their lifetime, according to Breastcancer.org. Yet the percentage goes much higher for those with the BRCA gene. Since FMH began risk assessment, more than 16,000 patients have filled out the survey, with about 2,000 being identified as having a higher risk for developing breast cancer. While men do get breast cancer, the screening questionnaire is for women usually with no symptoms. “When men come in for a mammogram, they are coming in because they have a problem,” Bahl says. “They are coming in because someone has felt a lump and a biopsy needs to be ordered.”

After getting the risk assessment results, the next step for patients is to sit down for a counseling session to verify answers and discuss the need for further enhanced screening and medical treatment such as annual breast MRIs and ultrasounds for a more tailored approach to their individual health. “It would be in the patient’s best interest if they knew that they were at high risk either because of a gene or if they have a strong family disposition to breast cancer … so they can then make

better informed decisions about whether or not imaging in addition to mammography would be helpful,” Kremers says.

MRIs are more expensive than mammograms and may give false positives, which lead to unnecessary biopsies. “We are trying to tailor a course of surveillance and medical therapy based on your assessed individualized risk,” Kremers says. “We want to see everything is confirmed first and then have a discussion about both the benefits and the risks of having advanced screening. … It is definitely an interactive [discussion]. It’s something that I think women need to know—the benefits and the risks.”

Patricia Rice, an advanced practical nurse in genetics, talks to each patient about their risk by looking at her family tree. “If we find that they have a mutation, I like to make the point that having hereditary cancer is rare,” Rice says. “It is not something that is common, but for the people who do have a higher risk the next step would be the genetic testing. It is just a blood test and if we find a gene mutation, it becomes a very powerful tool for actually preventing cancer. If somebody is high risk, we may chose to do a mastectomy if their risk is greater than 50 percent [of having cancer] over their lifetime and that can actually prevent them from getting breast cancer. Or we can recommend that they have their ovaries removed if a gene suggests their ovarian cancer risk would be high.”

Rice has two meetings with patients if genetic testing is performed; one if it is not. If patients are deemed to be high risk, Rice develops a plan for them, complete with referrals for monitoring and health needs. She also refers them to a support group. Knowing their risk “empowers them because now it is not up to fate,” Rice says. “We are going to take control. Even though we can’t change their genetic makeup, we can take control to significantly reduce their risk. We can actually prevent cancer in people who are at high risk. It is a very powerful tool.”

Bahl says the meetings also discuss changes in diet and exercise and other lifestyle changes to reduce lifetime risk. “The key concept is that knowledge is power and power is prevention,” she says. “If you have the knowledge then you are empowered to prevent. It’s the fear of the unknown of not knowing what to do about it but there are a lot of healthy lifestyle maneuvers and there are a lot of non-invasive things we can do to prevent a more devastating diagnosis like breast cancer. I think it is all about knowledge, education and empowerment.”