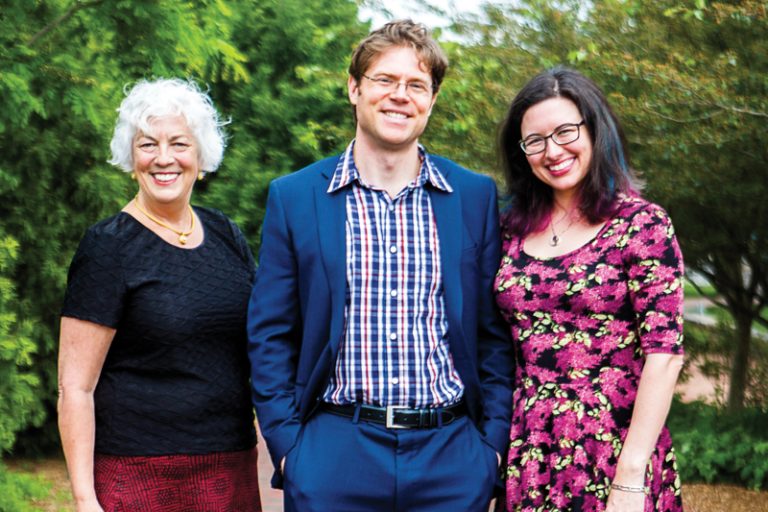 Ken Oldham, president and CEO of the United Way of Frederick County, calls them the “hand-raisers, game-changers and moment-makers.” They are the volunteers and supporters of the United Way who have been recognized with the organization’s BRAVO! awards for their commitment to fighting for the health, education and financial stability of every person in Frederick County.

“Their passion makes what we do possible,” Oldham says. “They embody our belief that, ‘To live better, we must Live United.’”

This year’s honorees embrace that belief, and then some.

In 2016, Frederick Regional Health System increased its annual employee giving in support of the United Way’s Unity Campaign by more than 300 percent, raising $36,170 in 2016 compared to $11,572 in 2015. FRHS supports other local United Way efforts as well, including the annual Day of Action and Stuff the Bus campaigns. It also refers clients to the United Way’s Prosperity Center, which works with other community organizations to improve the financial security of area residents.

Gurzick knows that many of her co-workers also benefit from United Way programs, including the tax preparation program or the matched savings program. “It is humbling to hear about the personal and profound impact these programs have had on them,” she says. “Whether it be the tax return dollars they were not expecting or the support they receive in saving to go to school or for a home to call their own, it is clear these programs can be the jumping off point for positive life changes.”

The United Way of Frederick County believes that multi-faceted programs that focus on education, health and financial stability are the best way to create lasting, positive generational change for those struggling with poverty and poor health.

The Frederick County Health Department is an important partner in those efforts. Under the leadership of its director, Dr. Barbara Brookmyer, the department conducted a community health needs assessment in 2016 that included a series of information-gathering sessions to determine what Frederick County stakeholders believed were the most pressing health issues facing residents today.

The final session was attended by more than 100 business, nonprofit and government representatives as well as private citizens who formed work groups to focus on three areas they believed are critical: behavioral health, seniors and adverse childhood experiences. “By addressing the priorities that people have said they are interested in, we can make a meaningful impact and make it sustainable,” Brookmyer says.

Using seniors as an example, Brookmyer points out how financial stability, education and health all intersect. “Seniors’ economic situations are often impacted by their level of education, which also impacts health, which can then impact their finances,” she says. “There is an interconnectedness that provides opportunities for us to collaborate with the United Way that are so apparent.”

For the better part of three decades, Joe Gatewood has shared the fruits of his successful career in wireless technology, real estate and mortgage business with others. He established his first charitable foundation 30 years ago in Montgomery County and has now brought his passion and expertise to Frederick County, where he currently resides.

Gatewood stepped up to re-organize and run the United Way’s annual fundraising campaign. He combined the marketing resources of The Frederick News-Post’s Season of Hope initiative with the annual Frederick 48 fundraiser to create the new Unity Campaign, which launched in 2014.

The Unity Campaign raises funds to support local nonprofits that address basic human needs and at-risk youth in Frederick County. Under the reorganization and Gatewood’s leadership, contributions to the Unity Campaign grew from $35,000 to $350,000 over the course of three years. “Frederick still has a small town feel to it. People are willing to get involved and are very welcoming,” he said. “They make it easy to do something like this.”

Dan Goldstein is a retired engineer who spent much of his career working for the Navy on integrated ship design and hydrodynamics in submarines. He is not an accountant, but he has bought and sold houses, invested money, and done his own taxes since he was 16 years old.

For the past two years, he has volunteered four days a week as a tax preparer for the United Way’s Volunteer Income Tax Assistance (VITA) program. The program prepared more than 400 2016 tax returns that are projected to bring more than $1 million in tax refunds back to Frederick County residents.

Goldstein says helping people maximize their refunds makes his work with VITA extremely satisfying, but there are also those special cases where his efforts lead to something bigger than simply helping people complete their tax returns.

He recalls one client who had let some critical paperwork get lost in a pile of other tax-related documents. Goldstein realized that the client needed to act immediately or risk serious tax liability. He even made some calls on his own to help the client take the critical steps to stave off what could have been financial disaster. “That is a case that I will remember,” he says.

The Unity Award: The Randall Family

The Randall family’s traditions of giving to Frederick County stretch back to 1883, when the family patriarch, William T. Delaplaine, founded what was to become The Frederick News-Post. During the particularly harsh winter of 1895, Delaplaine spearheaded the collection of food for local needy families. He actively participated in the food distribution but did so without his topcoat. He developed pneumonia and later passed away.

But his unfortunate death did not stop his descendants from carrying on his work. “Charitable giving and giving back to the community has always been important to our family,” says Will Randall, Delaplaine’s great-great-grandson.

Although The Frederick News-Post was recently sold to Ogden Newspapers of West Virginia, Randall says his family remains committed to promoting the basic human needs of Frederick County’s less-fortunate residents by supporting the United Way’s Unity Campaign and a charitable fund at The Community Foundation of Frederick County.

“We continue to be committed to Frederick County in our business, personal and philanthropic interests,” Randall says. His family will continue to give its time, talents

and treasure to numerous community organizations. “If there is something you like to do, you can do it to support a charity in Frederick,” he says.