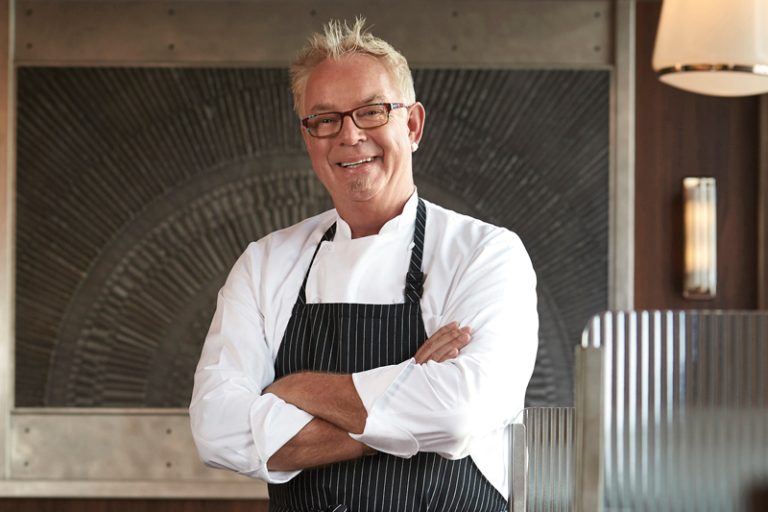 When the Food Network’s Chopped was looking for show contestants who had a familiarity with diner fare, Ype Von Hengst was a logical choice. The executive chef and co-founder of Silver Diner, which has 15 locations,

including Frederick at 5120 Buckeystown Pike, won the challenge that aired earlier this year. Since then he has been updating traditional diner dishes such as chicken pot pie and meat loaf. “We use the best chicken and all those beautiful, fresh vegetables. Our meatloaf has 100 percent grass-fed and corn-finished beef.” Even the pancakes flipped on the griddle are made with unbleached flour.

“I’m also working on a summer menu,” Von Hengst says, mentioning a watermelon and tomato salad. Talking about his Chopped appearance, he recalls being “a bit nervous, you never know what’s in those baskets,” but “I never broke into a sweat,” instead churning out winning dishes—just like in his diners. www.silverdiner.com

This month 18 Market Space, next to the Church Street parking deck, is scheduled to be occupied by White Rabbit Gastropub. Business partners Kenneth McFawn and Christopher Hubbard have been busy transforming the space into what has been called “not your typical restaurant.” For starters, the surroundings downstairs are reminiscent of a lodge with leather-covered walls, exposed wood, heavy, comfortable furniture and a rustic bar. Upstairs is the library room with former church pews for seating. McFawn says, “There’s not a single TV in the place.” Instead, diners will actually have a chance to carry on conversations. “They can sit down and relax,” he says.

The owners are proud of having 40 taps of craft beer, some of it from local brewers. In addition to enjoying a beer with food, customers can also purchase beer to go. Quality spirits and wines are also part of the operation.

The menu features locally sourced and seasonal ingredients and White Rabbit has its own special take on pub favorites. Steak, for instance, is prepared several ways, whether it’s Maryland style with lump crabmeat or Pacific with an Asian flair. It’s even offered as a vegetarian meal with a grilled portabella mushroom filling in for the beef. Brunch is special; try the fried green tomato Benedict. If the hunger pangs are later in the evening, the kitchen stays open and is ready to accommodate. Cheese steak empanadas anyone?

McFawn says he’s excited about the tucked-away location, likening it to a hidden gem. “Once you find it you’re glad you did,” he says. Look for them on Facebook.

When you have a group of hungry people who all want something different, the best option is to head to the nearest diner. Walkersville recently added that option with the opening of the Walkersville Diner at 111 Walkersville Village Way. Ali Karaturk, originally from New Jersey, and his family run the restaurant.

The chalkboard menu, which changes with daily specials, points to the variety the diner offers. Breakfast has sausage gravy over biscuits, and French toast, and lunch one day featured liverwurst and onion on rye. Dinner is filled with traditional diner options including roast turkey and stuffing. Follow Walkersville Diner on Facebook.