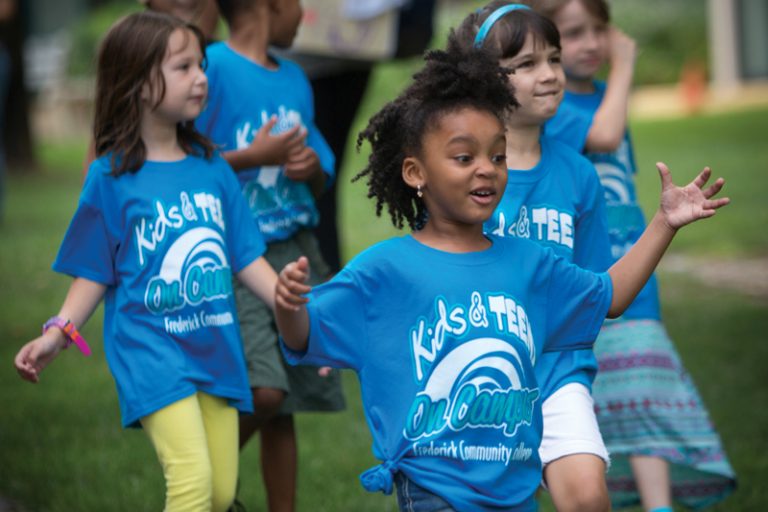 Kids are Begging for Summer School

Just leafing through the catalogue for the summer youth programs at Frederick Community College will have you wishing to be a kid again. Whether it’s a class in designing art from duct tape, learning how to record music using digital software or designing a video game, there’s a class for that.

“I have great teachers who have worked with me to come up with some very interesting classes,” says Karen Freeman, manager of the Kids on Campus, Teens on Campus and Home School Enrichment programs. “We have 178 classes for the summer with something for every age and every type of kid, whether they enjoy art or they’re interested in STEM (science, technology, engineering and math).”

Classes for ages 4 to 6 include “Music for Munchkins,” where youngsters explore music through singing, movement, games, crafts and even making instruments of their own. There are classes in Spanish and—just what kids that age especially like—a course on bugs, lizards and things that fly. “Weather Bugs,” another popular offering, teaches cool facts such as why clouds are white and what causes the wind to blow. They will even learn how to make a tornado in a bottle.

Freeman says creating classes for middle school students was a priority this year. “We realized that there was not enough for middle school students to do; not every middle schooler is into sports camps.” Those students can instead have fun with designing computer animation (maybe there’s a budding Walt Disney sitting in class) or exploring ways to repurpose everyday items into something fun and functional. Combining fashion and photography, a class called “Flashion” has students designing and constructing garments from materials such as newspapers, grocery bags and balloons.

Teens can also learn their way around a kitchen, cooking up made-from-scratch dishes and learning to use various culinary tools. A class on quilting results in something to decorate a bed and there are classes for pottery and designing tote bags. Literary, cultural and writing classes are also available and if your child likes mysteries there’s a class called “Did the Butler Do It?—the Science of Crime Solving.”

Freeman is in her fifth year with the program and says that it only gets better every year. Last year 2,400 students attended the seven-week program that is taught by teachers from Frederick County Public Schools, private schools and others with experience in various fields.

“Kids enjoy it,” she says. “They have a chance to pick and choose the things they like. We have had some kids who started by enrolling in one or two classes and now they are here all day, so that says something.”

Classes begin later this month and if there is space available you can even sign up on the first day of class. For more information, visit [email protected].

As the sun sets and the moon rises, take a journey into the dark recesses of Frederick’s bloody past and uncover some of its enduring mysteries with Ghost Tours of Historic Frederick, which has started its spring and summer season. The tours have been held for 18 years. Tour director Ron Angleberger says the city, with over 272 years of history, has countless stately and historic old homes, a Civil War battlefield, and a past that at times was very turbulent and violent, all of which make Frederick, unequivocally, one of the most haunted cities in the nation. Visit www.marylandghosttours.com.

FCPS Teacher of the Year

Karima Sharper, a special education teacher at Centerville Elementary School, is the Frederick County Public Schools’ Teacher of the Year. “Karima is a dynamic and motivating teacher at Centerville,” says Principal Tracy Hillard. ”She is a mentor to many staff members and is willing to share instructional practices and demonstrate how to use those practices in the classroom to improve student progress. … She shows that collaboration is a key to the success of all students, not just the students with special needs.”

Sharper joined FCPS in 2003 and has 15 years of teaching experience as a special educator, with more than 10 years working to implement reading-intervention programs, five years of participation on the FCPS Elementary Math Intervention Committee and a host of other accomplishments. Sharper also has more than 10 years of service as a mentor teacher for interns from Hood College.

Sharper earned bachelor’s degrees in special education and elementary education from High Point University and a master’s degree in curriculum and instruction from the University of Phoenix.

“This year, we had 69 outstanding Teacher of the Year nominees. … Ms. Sharper represents the many excellent teachers who serve children in Frederick County public schools,” says Superintendent Theresa Alban.

He also worked with disadvantaged and at-risk youngster and is founder and director of the Youth Activities Camp at First Missionary Baptist Church where he’s a member. His service to the elderly includes being the “Bingo Master” at the Frederick Senior Center. Recently Jones was honored by the Minority Business Vision for his service to the group that provides support to start-up and established minority businesses.

Jones was recognized for his “commitment and devotion to monthly networking events and activities that provided a forum for sharing of resource information and successful business strategies … leading to expanded growth opportunities,” according to a citation from Frederick County Executive Jan Gardner.

Jones helped organize Minority Business Vision by recruiting members and offering his restaurant, Café 611, as a meeting place. “Randy is a stalwart in the community, an advocate for minority groups, a recognized and respected leader and a longstanding pillar of Minority Business Vision and the community,” says Sherman Coleman, business development specialist for the county Office of Economic Development.

The most recent recognition joins a string of awards Jones has received over the years, including the Maryland Governor’s Volunteer Service Award and the Good Neighbor Award of Maryland from the state restaurant association.