When the Marines Marched 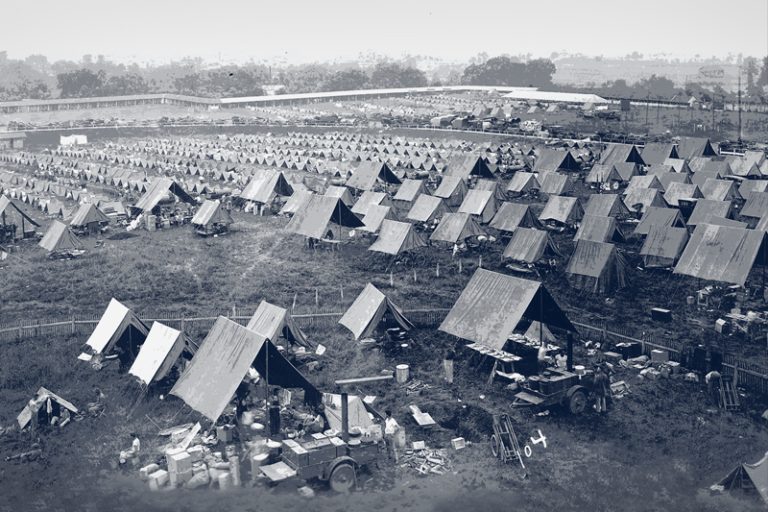 Early in the morning of Monday, June 19, 1922, more than 5,000 U.S. Marines—more than a quarter of the Corps at the time—marched from their camp in Quantico, Va., onto waiting barges supplied by the Navy. Four tug boats towed the barges up the Potomac River toward Washington, D.C. Meanwhile, tanks and artillery pieces hauled by trucks rolled out along the Richmond Road, headed for the same destination.

This display of men and firepower, which would eventually roll into Gettysburg, Pa., was much more than a patriotic demonstration; the Marines were, in fact, marching to save the Corps. Despite valiant service in World War I, government officials were considering disbanding the Marine Corps. Maj. Gen. John A. Lejeune, Commandant of the Marine Corps, understood that his Marines needed to fight for survival in the political arena and he devised a campaign to raise public awareness about the value of the Marine Corps. One of his tactics was making use of iconic, historical locations to conduct war games and train, putting the Marines out in front of the public. At the time, the national military parks, such as Gettysburg, were still under control of the U.S. War Department, which meant the Marines could use the parks as training grounds. Lejeune chose to do just that with a series of annual training exercises, which began a year earlier with a re-enactment of the Battle of the Wilderness.

The 1922 march to Gettysburg not only involved thousands of Marines, but The (Baltimore) Sun noted, “The 5,000 men are carrying the equipment of a complete division of nearly 20,000. In the machine-gun outfits especially the personnel is skeletonized, while the material is complete. Companies of 88 men are carrying ammu-nition, range finders and other technical gear for companies of about 140.”

The Marines spent their first night at East Potomac Park, south of the Washington Monument. Once they had fully set up camp on June 19, they marched past the White House and were reviewed by President Warren G. Harding and other dignitaries. “Observers declared that this is the first time that troops have passed

in review through the White House grounds since the Civil War,” the Marine Corps Gazette reported. It took a half an hour for the Marines to pass as the 134-piece combined Marine bands played music.

On June 20, the Marines marched to Bethesda. The following day they marched to Gaithersburg, where they spent two nights. On June 23, they arrived in Ridgeville, near Mount Airy.

From Ridgeville, the Marines marched along the National Road to the Frederick Fairgrounds. The first Marines began arriving in Frederick at 9 a.m. on Saturday, June 24, but the bulk of the group arrived around noon. By then, streetcars were carrying signs hanging along their sides announcing that the Marines had arrived at the fairgrounds. They were greeted with flags hanging from windows and thousands of people lining the road into Frederick.

“The old Frederick fair grounds, scene of famous gatherings each fall of people from all over the State to see horse races, prize pigs, pumpkins and side show freaks, is today a city of pup tents and motortrucks, with radio towers rising into the air at one side, smoke curling up from scores of field kitchens and band music floating down toward the city from leatherneck bands. Hundreds of automobiles journeyed out to see the sight,” The Sun reported.

Once the Marines were encamped, Frederick Mayor Lloyd C. Culler led a delegation of business and civic leaders out to the fairgrounds for an official greeting. Culler urged Gen. Smedley Butler, who commanded the Marine expedition, to stay through Sunday, but Butler insisted there was a schedule that had to be kept. However, the general did invite any Civil War veterans in Frederick to be special guests of the Marines at Gettysburg. Butler also attended a chamber of commerce dinner in Braddock Heights that evening as the guest of honor.

After the Marines had settled into camp Saturday afternoon, many of them watched the baseball game between the Frederick Hustlers and the Hanover Raiders, which was played on a field right next to the fairgrounds.

Some Fredericktonians got up as early as 5 a.m. to line the streets waiting to see the Marines march out of town on Sunday, June 25. “Gray-hair veterans and the silvery-haired women who had cheered the troops when they came through Maryland to save the North in the days from ‘61 to ‘65 watched with sparkling eyes and a far-away reminiscent gaze as they conjured up the scenes of long ago,” reported The Washington Post.

The Marines marched into the city along East Patrick Street and then headed out of town by going north on Market Street. “All along the road the Marines have been welcomed by admiring country people who cheer them on and invited them to ‘hurry up and come back again and next time stay longer,’” The Frederick Post reported.

As the Marines neared the city limits, there had initially been a plan for a Barbara Fritchie re-enactor to wave to the Marines as if they were Union troops in pursuit of Confederates. According to The Sun, this demonstration didn’t happen because Fritchie (alternatively spelled Frietchie) was considered a controversial topic in the town.

“Though her name is a household word in every Northern household, and millions of Americans know Barbara Frietchie and her flag defied the Confederate troops, about half of the people of Frederick never mention her name and scoff angrily whenever it comes up,” according to The Sun. The re-enactor was already in place at a window, but officials scotched the plan at the last minute.

The Marines reached Thurmont around 1:45 p.m. “Everyone from the small boy to the aged veteran was up and out to await and see the soldiers. Sunday School and church attendance suffered severely, and no doubt the few who did attend wished they were out on the street. Many persons remained in town preferring to miss their dinners rather than miss seeing this great military outfit arrive. Every porch along the State Road was crowded with people watching the passing trucks,” the Catoctin Clarion reported.

The Marines ran into a slight snag as they passed north along Church Street. The Western Maryland Railway passed over the road about three blocks north of the downtown square, and the trucks carrying the tanks didn’t have enough clearance to pass beneath the bridge. Heavy timbers had to be placed on the back of the trucks to allow the tanks to be unloaded. The trucks and tanks then rolled under the bridge separately. On the other side of the bridge, the tanks were loaded onto the trucks again.

The final night of the march was spent on Hooker Lewis’ farm just north of Thurmont.

Capt. George Hamilton, in command of a squadron of fighter planes providing “scout duty” while escorting the Marine infantry, along with Gunnery Sgt. George Martin, were flying a DH-4B fighter as they left their encampment at Thurmont shortly after noon on July 26 and proceeded north.

His de Havilland was at the rear of a formation of four planes serving as scouts for the Marines marching from Thurmont to Gettysburg. Nothing amiss among the planes was noticed until they began to approach the landing site at Camp Harding. Two of the planes in the escort landed safely in a designated portion of the fields near the intersection of Long Lane and Emmitsburg Road.

Then Hamilton and Martin’s plane suddenly went into a nose dive from about 3,000 feet up. It then became a tailspin. The plane crashed on the William Johns farm around 1:05 p.m., near what is presently the intersection of Johns Avenue and Culp Street in the Colt Park development. The (Gettysburg) Star and Sentinel reported the impact occurred within 50 feet of tents and equestrian equipment belonging to the Lew Dufour Carnival, which had set up along Steinwehr Avenue.

Hamilton died at the scene, and Martin died a short time later at Warner Hospital.

The accident is believed to have been due to the difference in the reading of the altimeter, by which fliers estimate their distance from the ground, at Quantico and Gettysburg. Quantico is at sea level, while Gettysburg is 600 feet above sea level. Consequently, an altimeter reading 1,000 feet would only be 400 feet above ground.

Hamilton and Martin were regarded as having been killed in the service of their country, and the deaths of the two Marines are the only known military line-of-duty deaths that have occurred on the Gettysburg battlefield since 1863.

Camp was set up on the Codori Farm and just north of the North Carolina Monument, and near the McMillan farmhouse near the farm and park boundary. The size of the encampment was reported by various newspapers to have been from 65 to 100 acres. Gunnery Sgt. Thomas E. Williams, director of the United States Marine Corps Historical Company, stated that 100 acres is probably closer to the actual size of the encampment.

Due to the planned stay of President Warren Harding and his wife, Florence, in the camp for a night, it was decided to build a “Canvas White House” for the president and his entourage. The final structure was an 18-room tent that had running water, electricity and porcelain bathtubs for six bathrooms.

The main reason the Marines marched to Gettysburg was to train. They conducted a historical re-enactment of Pickett’s Charge viewed by 100,000 spectators, including President Harding.

However, the more dramatic re-enactment came after the crowds left. Then the Marines brought in their tanks, planes and machine guns and fought Pickett’s Charge as they would in 1922. The re-enactment featured the “Union Air Force” fighting the “Confederate Air Force” for supremacy of the air.

After 10 days in Gettysburg, the Marines started marching back to Quantico on July 6. It was a retracing of the same route that they had taken from Quantico to Gettysburg except for one difference. They decided to take Frederick up on its generous offer and spend two nights in the city and only a single night in Rockville.

The YMCA pool may have been the most popular site among the Marines. “At all hours the building was used by the soldiers who thoroughly enjoyed the facilities.

The swimming pool and the showers were the greatest treat for the boys,” reported The Star and Sentinel. An estimated 1,000 Marines made use of the pool.

The Marines received a distinguished visitor as President Harding and his party stopped by on their way back from Marion, Ohio. The Hardings’ car stopped outside the camp and the president and his wife stood in the road as the Expeditionary Force Marine Corps Band serenaded them.

That evening, the 134-member band (actually a combination of three bands) was again called on to perform. An estimated 5,000 people came into the city from Frederick County as well as other counties to hear the band play at the Court House Park at 7:30 p.m. It was the largest open-air concert ever held in the city.

A few days later, the Marines were back in Quantico, having shown their capabilities to Frederick County, and to the nation.