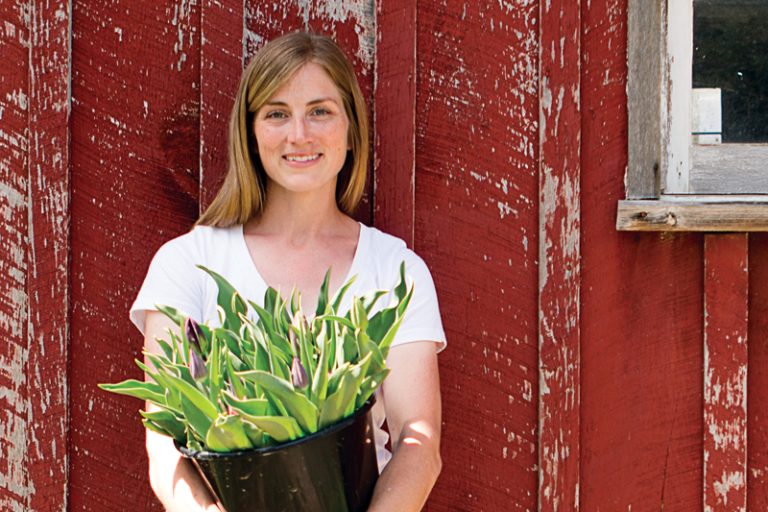 It’s a spring morning and Julianne and Tim Du Four are busy creating pathways for 4×100-foot beds on the quarter acre of Thurmont land dubbed The Petal Patch. Earlier, they had tilled in 56 cubic yards of mushroom compost, creating the best soil for their various flower seedlings.

Today, only brown soil is visible but the Du Fours are thinking of the colors that will result from their hard labor and meticulous planning for more than nine months. Blushes, burgundies, whites, light pinks, purples, reds and oranges were the colors they were seeing. “It’s going to be beautiful,” Tim Du Four says. Julianne Du Four adds, “We have big plans which I think you need to have in order to keep you going.”

The Walkersville couple grew up in small farming communities in Pennsylvania. Julianne Du Four remembers helping her mother take care of the family flower garden. Her mother once quipped that she never planted anything unless it flowered. “Everywhere I have moved, I have always grown flowers and plants,” Julianne says. The couple even jokes that the reason Julianne agreed to date Tim was because he had real flowers growing in his townhouse when they met.

Some of Tim’s strongest, fondest memories from his childhood came from helping his grandfather, who died recently, farm and garden. Starting The Petal Patch late last year was “important for me to get another chance to connect with nature,” he says. “It’s absolutely beautiful out here. The sounds you just don’t get in the neighborhood. With two small girls [Lillian, 6, and Madeleine] … I thought that it would be a really great opportunity to give them a little bit of what I had. Showing them firsthand, hard work is worth it.”

A majority of their flowers are being started using the soil-blocking method. Packing a machine with dirt, a lever is pushed down to punch out a three-quarter inch soil block. “If you put the soil into standard plastic trays, the roots get root-bound,” Julianne Du Four says. “They get clumped up. They don’t do that in these soil blocks. They grow underneath and they just spread out.”

Each block is placed on a cafeteria tray on a storage rack that has mounted grow lights. Once they have sprouted enough, the Du Fours will plant them in the patch. They estimate they will have 650 to 700 plants per row with 10 rows total. White netting will be stretched across the beds for the flowers to grow up through. “It is a little different than when you are in your garden and you let it get big and bushy,” she says. “We are really forcing them to grow tall and straight.”

As an internet technology director for a large consulting firm, Tim Du Four was even able to bring his work background into the process. Using Microsoft’s One Note app, he was able to create a document meticulously noting their research on their flowers, including a picture, number growing, scientific name, date planted, amount of sunlight, week planted and moisture needed. The data is their way of being efficient, Tim Du Four says, so they can have a plant for every spot and not waste seeds.

They will have flowers native to the area like rudbeckia, sunflowers, bleeding hearts and bachelor’s buttons, but they also plan on selling other varieties such as zinnias, dahlias, gomphrena, snap dragons, lisianthus and celosia.

Customers can find Petal Patch flowers for sale at several different locations including Tuesdays at the Keymar-based Oakie Doke Farm, Calvary Assembly of God’s market in Walkersville on Saturdays and Frederick City Market on Sundays. Dublin Roasters in Frederick also has bouquets available.

“I think [their] flowers add a true sense of beauty to any room,” says Serina Roy, owner of Dublin Roasters. “With fresh-cut flowers on every table at Dublin, it really says we care about more than just coffee when you stop in. It’s about the ambiance and about supporting local business.”

The Du Fours also are putting together an availability list ever week for some local florists. “We will be providing florists with an opportunity to get first crack at some of the more expensive or harder-to-get flower varieties,” Tim Du Four says. “One of the things we focused on was [growing] varieties that don’t ship well.”

Flowers bought at the supermarket or other box stores have no smell and have had the scent bred out of them, Julianne Du Four says. “Local flowers have a wonderful smell and they are going to last a lot longer because I am going to harvest them and sell them,” she says. “I don’t store them. I don’t dry-ship them.” The sunflowers she will be selling on the weekends will most likely be cut from the field no earlier than Friday.

Tim Du Four observes that many people are involved in Community Supported Agriculture, and their flowers offer a nice compliment to the movement. “Where your products come from is important and I think a lot of folks lost sight of that, and it is nice to see that it is coming back around,” he says. “…What is really interesting is looking at the other really well established flower farms across the United States is that we are not large, but we are also not small. Even at this scale. You can grow a lot flowers and if you get your succession plantings right, you can produce a lot of beautiful flowers on a patch of land this size.”