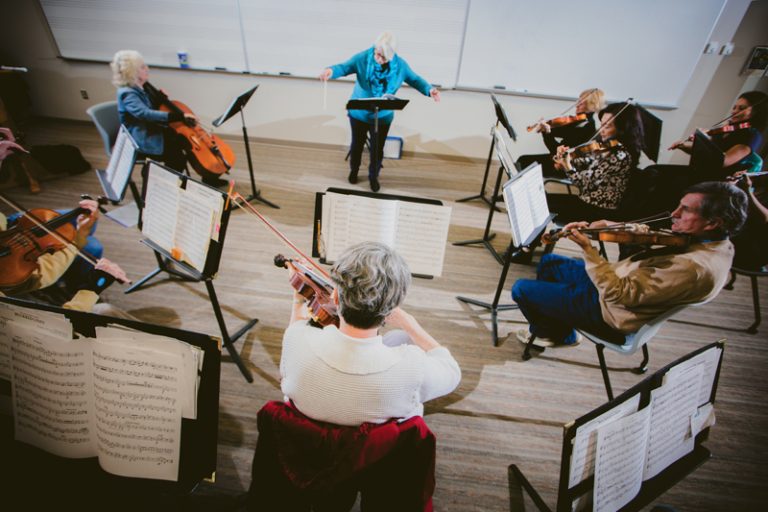 Some probably thought it was an ambitious idea at first. When Frederick Community College music instructor Lynn Fleming decided a decade ago there was a need for a string ensemble, there wasn’t enough funding, but she went with the “build it anyway” approach. “We only had four people in the beginning—not really enough for an ensemble—but we made it work,” Fleming says.

And then some. Today, the ensemble is going strong and averages up to 20 people each semester. (Students sign up for a 13-week course featuring a concert at the end.) This intergenerational group features players who return season after season, as well as beginners. A student could be a music teacher who wants more experience playing a string instrument; someone who wants to play professionally; or someone who just enjoys playing within the company of the group.

Performing as part of an ensemble is an important part of musical education, according to Fleming. Learning to play with other people, and to accompany other people, is a different skill set than simply playing an instrument in the comfort of your home or a classroom.

There are numerous opportunities for young students to perform at their schools, or in area youth orchestras; however, when Fleming began teaching at FCC, she didn’t see anything available for the beginning or returning adult student. “We have the FSO [Frederick Symphony Orchestra],” says Fleming, “but they are quite good, on an almost professional level. My group is a stepping stone to the FSO.”

“I didn’t play any instruments until I was 38,” says Toby Gibbon of Mount Airy, a violinist in the ensemble. “I’m strictly an amateur, but I love to play. Lynn is a really good director. She’s very reassuring and good at building your confidence.”

Holly Feather of Frederick, also a violinist, agrees. After she retired from Frederick County Public Schools, Feather played occasionally with pit orchestras in the area, but was looking for a regular place to play where she would feel comfortable. “Lynn’s enthusiasm is infectious. She makes everyone feel accepted,” Feather says. “When we have a beginner join the group, Lynn always says, ‘If you only play four notes tonight, that’s fine. Next time, you’ll

get four more.’ And she’s right. Those beginners make a lot of progress.”

Fleming’s musical choices include easy pieces that put a focus on technique, as well as pieces with more difficult solos to keep the more accomplished players challenged. “We play everything from classical to pop,” she says. “I love all kinds of music. But, I choose the music to address areas we need to work on. … For instance, right now we need to work on rhythms, so I chose the pop song Blurred Lines as one of the pieces for our upcoming concert.

It’s been controversial because of its raunchy lyrics and a lawsuit, but the music is perfect for us rhythmically, and that’s the only part we need.”

While improving musical skill is the main goal of the ensemble, it does have other benefits. Members have been known to become great friends and treat the group as a second family. “Everyone who has joined the group has been a good individual,” Feather says. “Everyone tries to help each other. That attitude is very important in a group like ours.”

Fleming’s desire to be inclusive extends beyond her students. During concerts, she takes the time to give background information on the pieces selected and to demonstrate musical segments to educate the audience. “When people know what to listen for, they can pick it out when they hear the selection. It really adds to the understanding and enjoyment of the piece,” she says.

And it’s clear she wants everyone to enjoy the experience. “Once, we had a large group of people come in late,” says Gibbon. “We were already a few songs into the program, but she simply restarted the concert. It was a very nice thing to do.”

Before moving to Frederick in 1999, Fleming lived in New York. She’s a graduate of The Juilliard School in New York, and also served as an instructor there. At FCC, she teaches “all things” and in the fall will add a music appreciation course to the college’s Institute for Learning in Retirement. “A community college is for all of the community,” she says. “That’s why I wanted to teach this course. It will be a lot of fun.”

This spring’s string ensemble concert will be held on May 11 at 7:30 p.m. at the Jack B. Kussmaul Theater on the FCC campus. A special guest performance by a newly formed guitar ensemble is planned. The concert is free, with a cookie reception afterward.

Fleming encourages anyone who’s interested in playing with the ensemble to send her an email at [email protected] “Most people come in very scared, but they soon realize we are a very forgiving group—and we have fun,” she says. “Once you join us, you don’t want to leave.”