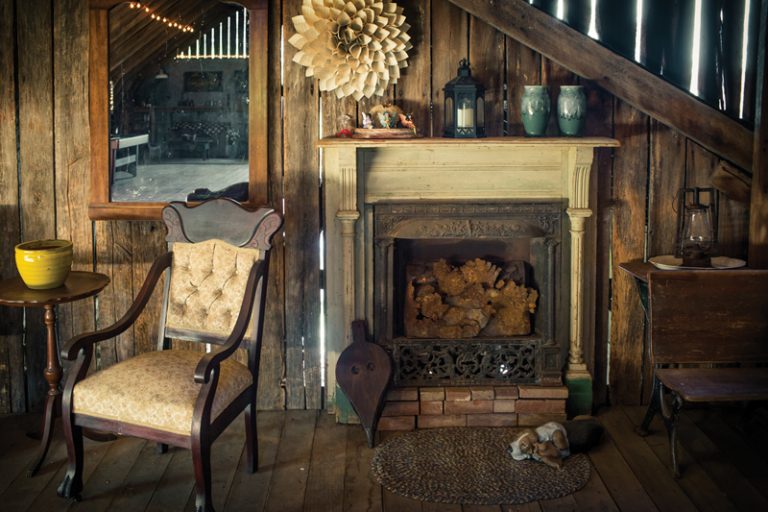 What is the Future for the County’s Historic Farm Buildings?

On a warm spring day, Donald Eader slides open a door on his barn to three visitors. Bales of hay are neatly stored inside. “Oh, I love it when [old barns] are being used!” exclaims Dean Fitzgerald, president and CEO of the Thurmont-based Fitzgerald’s Heavy Timber Construction. Through his company and as tour coordinator for the Frederick County Landmarks Foundation’s annual Barnstormers Tour, he has been in many historic barns over the years. Some are unused and falling apart, waiting for Mother Nature to strike a final mortal blow before they become a memory of the past. Fitzgerald says the images break his heart.

Eader’s barn is part of his 202-acre beef, soybean, corn and hay farm off Emerson Burrier Road in Mount Airy. He and his wife, Wanda, bought the farm in 1986 and moved into the house on the property in 2003. Wanda Eader once looked up land records and wills for the property; she found no mention of the barn but the home was built in 1890. Fitzgerald believes the barn could date back to that era as well. The original floorboards remain intact as well as the boards to the granary and a stone wall at the base of the barn.

When the Eaders bought the farm, the barn needed help. A wall was missing and all the piers had rotted away because cow manure had not been removed from the site. While some would have bulldozed the site to the ground without thinking twice, Eader opted for restoration. “I grew up on a dairy farm in Gaithersburg,” he says. “At one time, Gaithersburg had the best dairy farms in the whole world. There are no barns left down there anymore because they just got developed. They came in and just bulldozed everything down. I hate to see them go. That’s why I wanted to keep it.”

As much as Maryland is known for its crabs, Frederick County is recognized for its agriculture. It’s impossible to picture dairy cows, beef cattle and crops dotting the local fields without seeing a grand, weathered barn somewhere in the background. But as the county becomes more urban and suburban, those sights are fading fast. McMansions, American sprawl’s biggest cash crop, now outnumber barns in the county. Many of the historic barns have been torn down, their wood repurposed into furniture or flooring—ironically sometimes finding new life in McMansions —while other dilapidated structures just collapse under the weight of time and neglect.

Eader says the money he has put into his historic barn could have paid for two new barns he had constructed on the property during the past few years. He even gets more use out of the new facilities, but, “I don’t think this farm would be the same without that big barn. …. I don’t know if the average person that lives in Frederick County appreciates these old barns or not. Someone with a farming background like myself, there is nothing better than to walk into an old barn to see how good of shape it is in.”

Fitzgerald is visiting the Eaders barn this day to gather information for the Barnstormers Tour, set for June 10. Highlighting nine barns of the Linganore Valley this year, the event allows ticket-holders to participate in a self-guided tour along with being able to watch area artists paint portraits of the structures. Each year, the foundation picks a new area of the county to showcase with tours in the past going to South Mountain, Sugarloaf and Middletown Valley. More than 200 visitors are expected to take the tour which also features trained docents at each site.

“The heart of the family farm”

Fitzgerald looks around each barn set to be a tour stop, searching for clues about its history. “These old log joists are huge,” he notes while meandering through a Green Valley Road barn on the outskirts of Libertytown owned by Joel Gaver. “See the notch there at the end? That thing came out of a log building, probably a log barn.”

Each barn’s age is an educated guess for Fitzgerald. He estimates Gaver’s could date back to the mid- to late-1800s. Gaver was a dairy farmer but now has his nephew run the farm. Today, the barn stores hay and the wagon used at Gaver Farm in Mount Airy to transport guests to its pumpkin patches.

Shortly after Gaver bought the farm in 1971, a strong wind storm pushed the then-empty barn slip off its foundation. He had to have the structure jacked up and moved back onto the foundation. Then the same thing happened again a short time later. “It’s pretty amazing all the stuff this barn has been through and she’s still here,” Fitzgerald says.

During his years as a farmer, Gaver says the barn served him well and was worth the money he put into its upkeep. “I would never let the barn fall down,” he says. “I think that is the biggest sin, when you see these barns [disappear]. My father always told me, and he came up during the Depression, ‘If you keep the weather out, the barn will stand. If you let the weather in, the barn is going down.’ I have seen too many barns [go down].”

He has made several repairs over the years but the barn is now stable and strong. “The funniest thing is … you get a wind storm and you stay in this barn, it creaks and makes terrible noises but it’s going to stay there. It doesn’t move.” Adds Fitzgerald, “These trees out here. They are moving a lot, too, and that is a lot of what helps preserve them. It is like pushing over a spring. It just keeps bouncing back and forth. The barn was intended to work that way. The guys who did it in the day, whether it was 1850 or 1890, they knew that. The [barn] would move, even when it is in good health. It will move.”

Cindy Davis’ barn on Dollyhyde Road in Mount Airy could date back as early as 1770. “To me, the structure and the workmanship in it is amazing,” she says. “It has chestnut beams, which are absolutely huge. It has all these clever joints and pegs and stonework, some of which are very rare to any barns that are still around. Personally, I just love a glimpse back in time where you can actually see a beam being hoisted into place. I just don’t know how they did it because of the size of them. They are just absolutely huge. It’s absolutely amazing. … My barn during its heyday, at least in my mind, it was the heart of a family farm. It housed their things. It protected them. It allowed them to provide their livelihood.”

The property is not currently being farmed, but Davis refused to tear the barn down. She had repairs done on the structure and used the barn for storage until a year and a half ago. A family member’s 80th birthday celebration needed to be moved indoors due to weather, so she volunteered her barn, spending five hours cleaning and moving items out.“We were all just amazed how great it looked,” Davis says. “It was like it came to life and all of these fantastic features just screamed out. It was just beautiful.”

She has spent the past 18 months restoring the barn and turning the space into a monthly hangout spot for neighbors, friends and family called “The Hydeout”—a play on the spelling of Dollyhyde Road—that includes primitive farming décor and a game room with pool, ping pong and darts.

Born the youngest of 12 on a dairy farm just about a mile from her current home, Davis says she is proud of the county’s agricultural heritage. “Frederick County is changing and nothing is going to stop that,” she says. “The parts of the rural county that we can preserve and keep truly rural and the way that they were originally back in their day, I think that is very important for our county and the agricultural history of our county as well as for children growing up and new people coming in to see what the roots of this county really are.”

“It will pay for itself”

The tour’s host barn, on Glissans Mill Road in Mount Airy, will also receive guests for live music and a reception to judge and sell the artwork created that day. Owner Dyke Garver initially thought one of his barns dated back to the mid-1800s, but Fitzgerald sees hand-hewn beams and thinks it might be as early as the 1780s. The rafters are saw-mill material though. “This really is a beautiful building,” Fitzgerald tells Garver. He even spies an old hoist system, which could date back to the late 1800s, once used to lift wagon beds off the running gear.

Garver’s farm has heifers but is moving into beef cattle. The property features multiple barns that span more than two centuries of agricultural construction. “I don’t like tearing [anything] down,” says Garver, who bought the property from his father.

He compares the barns to cars. If you drove a car for more than 100 years, you’d probably have to do major repairs at some point, like putting in a new engine or changing the tires dozens of times. “You might have some major things you have to deal with [in owning an historic barn], but you’ve got a really good building there,” he says. “If you can make that investment, it will pay for itself. A lot of us don’t think that way anymore. … A lot of our forefathers they didn’t think that way. They wanted your kids to benefit from it. Your grandparents were thinking that way. That is how our nation was founded. I know this sounds kind of [corny] but it is true. It reflected not just in our politics and in our government, but in our buildings. There were a lot of buildings built that didn’t make it, but there’s a lot of them that were made to be here for a long time and we don’t take care of them. We don’t appreciate them. We should. It will pay for itself. It will.”