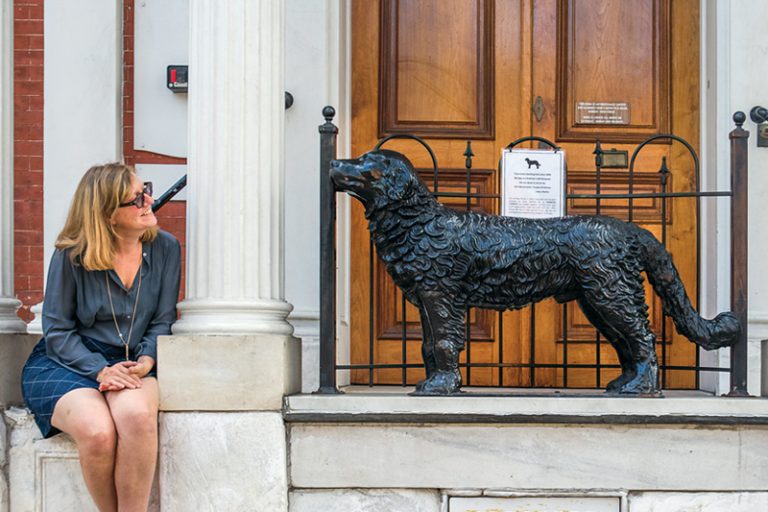 Andy Stout was faced with a decision when the Downtown building that housed his nonprofit office for more than a decade was changing owners and the rent was set to rise. He could eat the higher cost, which would sap money from his agency’s core mission—to preserve national historic archaeological sites. Or he could move out of the city.

“Frederick is changing and rents are going up,” says Stout, director of the Archaeological Conservancy’s Eastern Region, which stretches from Maine to North Carolina. “There really weren’t a lot of options if we wanted to remain Downtown.”

Then Stout learned about Federated Charities, a longtime fixture in the city’s safety net community that provides below-market-rate tenant space for nonprofit organizations as part of its own mission. “Because they cater to nonprofits,” Stout says, “we were able to get a much better rental agreement with them than we would have with anyone else.”

“In the era before things like social service agencies existed, we were providing that kind of outreach,” says Elin Ross, executive director of Federated Charities, which was founded in 1911 and may be most recognizable by the black iron dog—named Charity—on the portico of the property’s 22 S. Market St. entrance.

The historic property—the former home of philanthropist Margaret Williams—was donated to Federated Charities in the 1930s. Since then, the organization has supported itself—and its mission—largely on the income from nonprofit tenants, which have included the Red Cross, the United Way and the Community Foundation of Frederick County.

Today, the organization still provides direct services in the form of micro-grants for the needy, healthy food classes and distributions for the hungry, and a popular program that lends medical equipment for no charge. But that’s only half the mission. Moving forward, Federated Charities sees a growing role in supporting the area’s nonprofit community even beyond offering affordable tenant-space to groups like Stout’s. That includes underwriting professional development classes to help nonprofits be successful, and the opening last January of a “charity incubator,” where prospective start-ups and other groups (even for-profit businesses) with thin margins can rent flexible Downtown office space by the day, week or month.

Ross, who became the organization’s executive director in November 2015, says the “strategic assistance” and incubator programs were a natural evolution in Federated Charities’ mission, which has always been to identify what the community needs and then try to meet those needs. “You save 40 percent in rent that you can use for programming,” she says, referring to the organization’s tenant program, which dates to World War II. “But what are the things that we can do as an organization to help you function more effectively?”

In April, the organization held the first in its quarterly series of professional development classes. An ad on social media for the event pitched it like a master class in how to get a successful nonprofit off the ground. In an interview, Ross—who founded and operated Cakes for Cause at Moxie Bakery for five years until 2013—says it’s not easy to navigate the many layers of setting up and keeping afloat a nonprofit. But that should not stand in the way of a good idea.

“Because you are going to put the next great program out there in Frederick,” says Ross. “And that’s the program that everybody in Frederick needs. Don’t we have a responsibility to try and help you get there?”

Alecks Ferguson, education and events coordinator at Common Market food co-op, which partners with Federated Charities to deliver food and cooking classes at the Housing Authority of Frederick, echoes Ross. “What is unique about this organization is that they conduct nonprofit work in its budding stages, first recognizing potential that often starts small, but blossoms into a project that becomes integral to the community,” Ferguson says.

An example is how Federated Charities partnered recently with the fledgling Children of Incarcerated Parents Partnership, a nonprofit founded a few years ago to assist Frederick County kids whose parents are imprisoned. Federated Charities provided one-time grants from its emergency fund to the nonprofit’s clients to purchase a uniform and a vacuum cleaner to help them get or stay employed. “I think of them as the umbrella under which nonprofits like mine can get needed expertise and services,” says Shari Scher, the group’s president.

Federated Charities’ role in the community functions largely under the radar—unless you have needed a pair of crutches, Ross jokes. “We’re here for the thing that you didn’t expect when you woke up this morning,” she says, referring to the slogan of the organization’s medical equipment loan closet, which lends about 1,000 crutches, wheelchairs and bedside commodes every year. “And I would say the same thing about our strategic assistance is that we’re here for the last thing that you expected to have to deal with as a nonprofit.”

Truby LaGarde, a longtime member of the Federated Charities board of directors, sees the pivot to a more hands-on approach toward cultivating nonprofits is a healthy one that might also raise the organization’s public profile. In that vein, the board also approved the 106-year-old organization’s first signature public event, “The Art of the Dog,” a dog-themed open house and silent auction on June 8. The renewed energy at Federated Charities—attributed by many to Ross—will “help people recognize what a gem they’ve got here in the community,” says LaGarde, whose mother used to sew for the Red Cross in the building and late in her life utilized the loan closet.

Since taking the helm, Ross has removed from storage a treasure of artifacts and images that help tell the story of Federated Charities. Now they are sprinkled around the rooms and hang on the walls, Ross says, “to have our tenants and visitors reminded that this isn’t just a random building that exists here. It exists here for a purpose.”