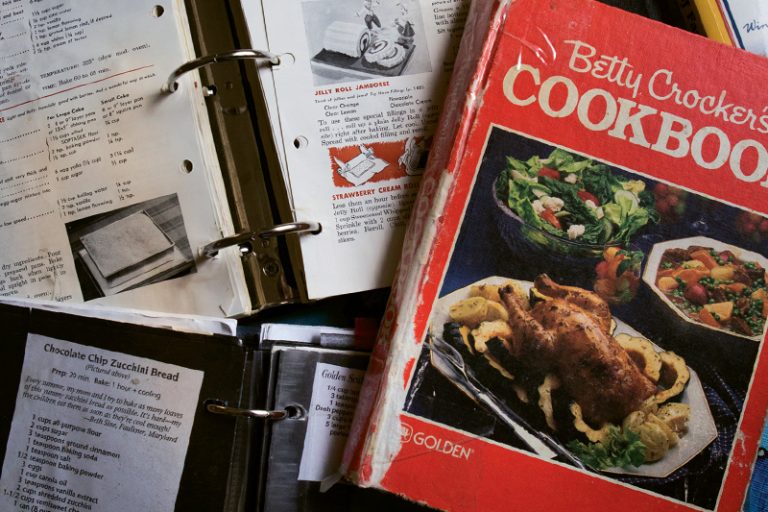 We share our culture and history when we share food. Those traditions are transmitted across the ages, from generation to generation, in little bites and every day actions. An over-arching heritage seasoned with diversity of ingredients, techniques and recipes enables each family to build bonds and nourish bodies though common experience. Is your family’s recipe for corn bread sweet or savory? Does your idea of “normal” chili have beans or just meat? If you commemorate St. Patrick’s Day, is it with corned beef or bacon? It probably depends on what your mother made.

The guardian of a treasured family recipe—Grandma, Auntie, Mimi, Poppy, Oma or Bubba—has a powerful influence on the personal story of everyone at the table. It’s why some people loathe to give up details about their signature dish. That kind of power can go to your head. Others share their knowledge freely, as homage to the countless cooks who came before, ladling out love by the bowlful.

Back in the Day

Sylvia Springer of Frederick, a retired legal secretary, is a living bridge between classic Americana of the early 20th century and her family’s youngest members. “I can picture my grandmother, Lula Phelps, so plainly,” she recalls. “She lived across the highway from me in Bartonsville. She made homemade kinklings, rolls, bread, sticky buns and cakes. She was up all night cooking.” Springer helped her industrious grandmother by delivering armloads of baked goods to local factories where workers had standing orders. “Even the mailman would stop to get his weekly loaf of bread from her. When you walked in her kitchen,” Springer sighs deeply, “the aroma just went all through the house. My memories of her are so vivid.” The family butchered their own meat and made ice cream and butter by hand. “We’d all take turns churning it,” back in the good old days.

Some of Springer’s favorite recipes from her mother and grandmother are neatly typed but splattered and worn from decades of use. Most are simply ingredient lists with no directions.  She jokes that some are covered in more cake batter than writing, acknowledging, “Most older recipes are simple. It’s just time-consuming.” It’s time well spent, according to Springer, who inherited her grandmother’s energy and zeal for feeding people. Now 73, she cooks for seven every night, including her appreciative niece and family next door. Sunday supper may be hand-rolled slippery dough pot pie and freshly baked sourdough bread, followed by hot milk sponge cake with fruit or Grandma Phelps’ filled cookies. She also puts up a bounty of canned goods and preserves that might seem exotic in other kitchens, such as violet blossom jam, corncob jelly and a zucchini-based piña colada jam (sans pineapple but with rum).

Like any good cook, Springer’s not afraid to innovate. She’ll search the internet for ideas and update old favorites, adding her own creations to the family’s recipe stock. “My great nephew is a good cook,” says Springer. “So, I always say, if anything happens to me, I want him to have all my recipes and cookbooks. It’s family.”

Lisa Hildebrandt is another Frederick County native who regularly delves into a treasure trove of family recipes. “I don’t remember loving cooking as much when I was younger,” she ponders, “probably because I was busy rearing kids. I didn’t have the time.” When her stepfather gave her a book of kids’ party theme ideas, Hildebrandt discovered a love for creative cooking as a way to spread happiness. “I think that’s what really turned me on to baking.”

She’s since expanded her repertoire, incorporating old family favorites. Although she hasn’t tried to replicate them yet, she fondly remembers her own mother making little “sugar” pies from leftover bits of dough. When her brother mentioned black walnut cake, Hildebrandt found it in her inherited recipe stash. She suspects it came to her grandfather from his mother, Rosalie Aust Dinkel, born in Switzerland in 1882. “It was just scribbled down, so I had to do some research to decipher it. … Now I make it every year for my brother’s birthday.” She says the family connection makes it even better. “It was really sweet to see my grandfather’s handwriting.”

Her family also loves a luscious but labor-intensive cheesecake recipe handed down from her dad’s mom. “You beat it for 40 minutes. So, it’s very airy and creamy,” says Hildebrandt, noting the task is easier with a modern stand-mixer. Her now-grown daughters make it, too. “I was very close to my grandmother and I remember her fondly when I use her things,” including some bake ware. “My dad repaired the wooden handle on one pot so I can keep using it. … It’s interesting to think that 100 years ago, my ancestor made something for her family and now I can do the same.”

Fredericktonian Jennifer Crouse, an event planner with the American Seed Trade Association, was searching for gift-giving inspiration when she came up with the idea to make personalized cookbooks for her mom, grandmother and sister-in-law. She used an online resource to create and print a handful of copies. Leading up to Christmas, the family joked about what must-have dishes should be on their holiday menu. Then a chance meeting with celebrity chef Paula Deen brought the project into focus. Crouse says, “I decided, while my grandmother was still alive, I would compile all these recipes and old photos. … Uncle Greg’s favorite dish would have a picture of him as a baby.”

Her grandmother and other family members have since passed away. “When we make those recipes,” says Crouse with a tremble in her voice, “it makes us feel closer to them now that they are gone.” One of her favorite inclusions is a simple breakfast casserole that can be prepared ahead and baked the next day. “It’s not an outrageously unusual recipe,” Crouse says, “but it has a special memory attached for me because that’s what my mom and I would make on Christmas Eve. Then nobody has to be stuck in the kitchen on Christmas morning.”

Crouse refers to the little cookbook often, and even repeats her grandmother’s lullabies to her own children, Madeline, 6, and Hayley, 3. “It’s amazing to think how connected the generations are … more than you realize.”

Lightly grease a large casserole dish. Cover the bottom of the casserole dish with bread cubes. Layer cooked sausage on top and sprinkle with cheese. Beat eggs, combine with milk and spices and pour over cheese. Refrigerate overnight.

The next morning, bake at 350 degrees for approximately 45 minutes, covered. Makes at least six servings. Best if served with the matching family recipe of homemade sausage gravy.

Brown sausage in an extra-large, non-stick sauce pan and break into small chunks. Keep all the sausage grease in the pot. Add flower into the sausage and grease and cook for a few minutes until it gets slightly pasty, stirring constantly. Add in milk and stir occasionally over medium-to-medium/high heat. It will thicken the longer it cooks. If it is too thin after 10 minutes of cooking, add a shaken-up mixture of a few tablespoons of flour and water and cook for another five minutes. Add salt and pepper to taste. The gravy also thickens more if allowed to rest, off the heat, a few minutes after cooking.

Warm milk and butter together. Mix egg and sugar until fluffy. Add vanilla and mix well. Add flour and baking powder alternately with the milk/butter mixture. Beat five to six minutes until batter is lemon-colored. The more you beat, the more the finished cake texture will be smooth and creamy. Pour into a greased and floured 13×9 pan and bake at 350 degrees for 30 to 35 minutes.

Cool and frost with your favorite icing. Cut into squares and split open. Layer with diced strawberries and sandwich together. Put more strawberries on top. Pour hot milk over all and enjoy.

Put filling ingredients in a sauce pan and cook until slightly thickened.

Roll out pastry dough and cut into circles. Place half of the circles onto a greased cookie sheet. Top with 1 to 2 teaspoons of filling in the center of each pastry circle. Quickly put another dough circle on top of the filling and pinch the two pieces together at the edges to keep the filling from leaking onto the cookie sheet. Bake at 400 degrees for 8 to 10 minutes. Remove and cool.

Wash and rinse violet blossoms and place in a food processor or blender. Blend well with ¾ cup water and lime juice. Gradually add sugar and blend until the ingredients form a smooth paste. In a sauce pan, combine remaining water and pectin and bring to a boil for one minute. Add to food processor and blend. Quickly pour into jelly jars and seal. Mixture sets up quickly. Once cooled, store in the refrigerator or freezer. This jam is a beautiful purple color, but you may have to stir if it separates. Makes four to five jars.

Arrange fruit in pie shell. Top with pats of butter. Beat together sugar, flour and eggs. Pour over fruit. Top with cinnamon, if desired. Bake at 400 degrees for 15 minutes. Then bake another 40 minutes at 350 degrees. Cool completely and refrigerate. Fresh fruit makes this pie very juicy, but you can use drained canned fruit as well. Feel free to improvise with your favorites. Best if eaten in one to two days.