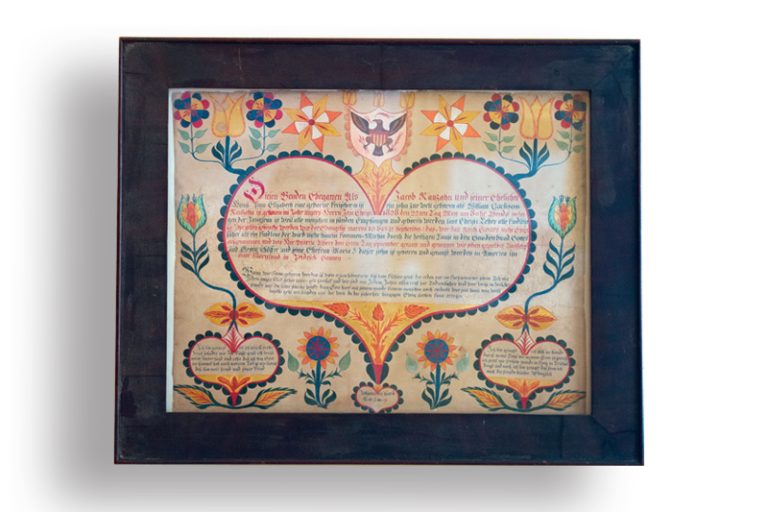 Fraktur is decorated calligraphy used to commemorate births, weddings, baptisms and even holidays. We associate fraktur with the Pennsylvania German culture, which significantly influenced the early decorative arts of Frederick County. Fraktur often used symbols of nature—vines, flowers, trees, stars and birds, in addition to angels, cherubs and hearts.

The fraktur highlighted here is a form of “taufschein” in that it commemorates the birth and baptism of William Rauzahn, who was born on May 22, 1828, and baptized Sept. 6 that same year. Rauzahn lived in the Silver Run area of what is now Carroll County but was still part of Frederick County in 1828.

The Rauzahn fraktur, which was produced by Johannes Bard, can be compared to another one on display in Heritage Frederick’s “Frederick by Design” exhibit that commemorates the 1787 baptism of Susana Derr. Although made 40 years later, the Rauzahn fraktur resembles the earlier style in many regards with its motifs of tulips, sunflowers, hearts and stars, along with its vivid use of color. As with most frakturs, it is written in German. By about 1825, American frakturs were increasingly mass-produced, with the artist having only to hand-color printed figures or shapes and fill in personal information. The Rauzahn fraktur is an exception to that trend.

What is most remarkable about the Rauzahn fraktur is the symbol of an eagle inside a shield, which appears over a central heart with German text. The eagle is distinctly American in style, not a European-style phoenix. It is also embellished with other American symbols, with arrows and grain stalks in its talons and another shield over its breast with red and yellow stripes. This American icon, with the other traditional fraktur imagery and German text, represents a unique blending of Pennsylvania German culture and American national spirit.

Much of the German text relates to religious tenets and family information. In one of the hearts is a sentence—part of a larger verse—that seems timeless and lyrical: “When we are just born from the first step of life until the cold grave of the earth is only a short measured step.”