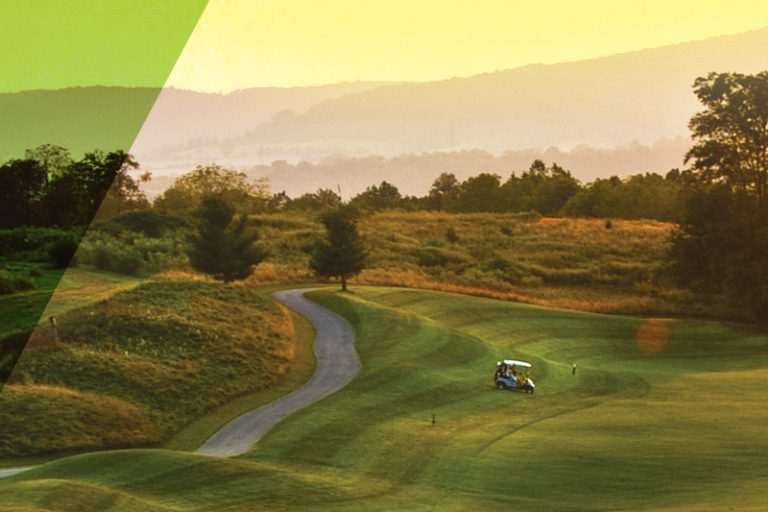 Area golfers owe thanks to Bob Sturges. The godfather of Frederick County premium, daily-fee golf glimpsed into the future when he spied a “Farm For-Sale” sign along Interstate 270 in 1996.

Sturges couldn’t have known then that his discovery would ignite an upscale, six-club boom that would repurpose fading farms into Maryland’s finest concentration of must-play courses. Two decades later, a historic downtown renowned for its saw-blade skyline of clustered church spires is a Mid-Atlantic sweet spot for another cluster, this one of challenging, scenic courses with allure for every level golfer.

Drawn to J.T. Worthington’s 206-acre farm as the dream canvas that would shorten the commute between his Rockville home and the golf course his family then owed in Carroll Valley, Pa., Sturges bid immediately on the property, only to learn of a pending offer with an offbeat twist. “[The other bidder] wanted to build a golf course—and petting zoo,” says Sturges.

Imagine how badly encounters of the critter kind would have scarred Frederick County’s golf reputation, never mind wayward golfers, had the wild-kingdom course prevailed? “I’m not sure how those two worlds would have come together,” Brian Ault, who also designed Clustered Spires, Glade Valley and Hope Valley, laughs. “Talk about a bunch of hazards. They might have had wild animals alongside the fairways.”

It was Sturges’ game-changing vision that helped establish a major Mid-Atlantic golf player. “It doesn’t have the resort feel,

but Frederick County has become a miniature Myrtle Beach [and] Pinehurst as a destination for people to just come play golf,” says J.P. Lunn, who owns Sabre Golf and Rec and serves as vice president of the Mid-Atlantic PGA. “It’s been fantastic to watch this area grow into as good a place to stay and play as anywhere in the Mid-Atlantic.”

Losing out to Sturges proved equally serendipitous for another upscale-course pioneer, Sam Dunn, who discovered his Ijamsville farmland gem a year later. “It was a blessing in disguise when we didn’t get Worthington,” says Dunn, who with friend Steve Goodwin hired KemperSports Management. “Whiskey was just magical when we found that land.”

“Ocean City has a lot of good golf courses within close proximity,” Maryland National director of golf Steve Miller says. “But as far as public-access courses, this area is right up there with Ocean City in the state.”

There’s no bad course in Frederick County, only what best fits one’s game and budget. “You don’t find many destinations as good as this Mid-Atlantic mecca,” says Jon LeSage, general manager and pro at P.B. Dye.

13-year www.golffrederickmd.com website, using 10 courses and four hotels. “My typical trip is 20 to 24 [people], three nights, four rounds,” he says. “Come in Thursday, play a 2 p.m. round at Musket; play Worthington Friday; Richland or P.B. Dye Saturday. Sunday at Musket. Depending where they stay, it’s a little over $400.”

Moore adds, “I’m selling, not only the courses, but, within 10 minutes of their hotel, over 100 restaurants and bars. People come here, like it so much, they come back.”

Scott Wisnom, director of sales/marketing at Whiskey Creek and also a member of the Frederick County Tourism Board, says no recent quantifier exists for golf’s economic impact. Yet with 1.8 million tourists spending $391.6 million in 2015, golf is surely a Dustin Johnson-strong driver. “The golf industry in this area is healthy,” Wisnom says. “Whiskey hosts over 100 groups every year. We’re very fortunate about the property we have. And the other courses only help the name of Frederick County golf grow.” And continue enticing.

Michael Sowell, 60, and retired military buddy Kenner Samuels embrace Glade Valley for both its velvet-greens, the handiwork of general manager Donnie Jacobs, and for its $20 senior/Valley Card discount.

Whiskey’s $105-weekend rate softens once a player slows down driving onto its mile-long entrance. “Because more than 50 percent of our customer base comes from the D.C. area, they’re stressed from driving in traffic,” says general manager Ted Goodenow, proud of his course’s 17 Kemper awards, most of which are for exemplary customer service. “They get up I-270 and find themselves in the middle of nowhere. … That entrance is pretty neat because you really don’t know what you’re going to see. You get here, the experience just keeps getting better.”

Bucking traditional design, Whiskey’s ninth and 18th holes tumble into a rustic, Dunn-designed clubhouse nestled in an amphitheater overlooking 19th-century stone farmhouse/Prohibition-era still ruins amidst the 18th fairway. Consultant Ernie Els once toasted Dunn’s vision over a post-round beer on the pond-side porch surveying the area’s most Instagram-worthy finishing hole. “I’ve played in Scotland and Ireland where it’s common to see ruins of stone walls and houses,” Dunn says. “It was a total no-brainer to keep the ruins.”

Dye superintendent Chris Navin’s lead-assistant apprenticeship at best-in-state Bulle Rock, designed by P.B.’s renowned father, Pete, is paying off. “P.B. stopped by in August,” Navin says. “He was very complimentary about how visually appealing the course is.”

Worthington Manor wowed Maryland State Golf Association officials calibrating its 1998-opening slope/rating. “I said, ‘Can I run into town and get you guys lunch?’” Ed Coyle, general manager and pro at Worthington recalls. “[MSGA official] Ed Lynch goes, ‘Yeah. Can we get you guys a U.S. Open qualifier?’ I said, ‘Sure!’”

There have also been reports of cremains poured at Clustered Spires and other courses, although technically the practice is against the law. But for many, paying homage on a fairway to heaven on one of Frederick County’s scenic courses is too much to resist.