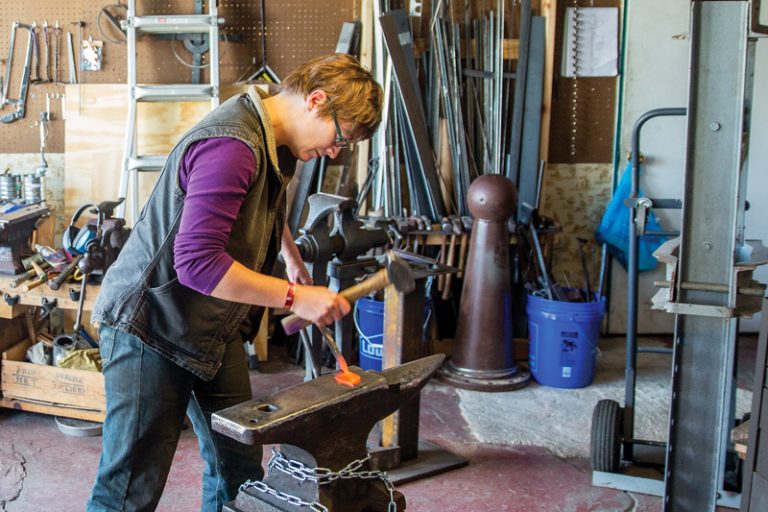 Revival in the Art of Blacksmithing Inspires Woman to Create, Teach

Caitlin Morris spent her career managing companies. Looking back, she remembers a lot of emails. And at the end of the day, that’s all she had to show for her work: emails. “I’ve always loved my jobs,” Morris, of Frederick, says. “But they say when you really love your job you never do a day of work in your life.”

These days, she is making art—and teaching others to make it—as the owner and instructor at Ms Caitlin’s School of Blacksmithing. “I can say, ‘I made this’ at the end of the day,” she says. “It’s empowering.”

She founded her school, on West All Saints Street in Downtown Frederick, in 2015—six years after she first learned to heat and bend steel. In 2009, she began searching for an artistic hobby and entered dozens of ideas in an Excel spreadsheet. She sorted the hobbies alphabetically, so she decided to start at the top of the list, with blacksmithing.

She enrolled in a one-week course at John C. Campbell Folk School in North Carolina and fell in love, signing up for her second class before the first was over. “I was driving home from the class and called a friend and said I want to quit my day job and become a blacksmith,” Morris says.

Her friend tried to talk her out of it. When Morris told her parents about her plans, they asked, “Why?”

But there was no turning back for Morris, who knew she had found her calling. “The most important thing is this,” Morris wrote on the brochure for her school. “Caitlin loves blacksmithing.”

And as much as she loved learning blacksmithing, she fell equally in love with teaching. “I started teaching blacksmithing 20 minutes after I learned to make my first hook,” Morris says, citing lessons she gave her friends.

Her most high-profile art project to date has been designing the key that dropped on New Year’s Eve in Frederick on Dec. 31, 2016. Weighing about 40 pounds, it was made of steel, paint and LED lights, measuring 58 inches tall and 18 inches wide.

Morris says the structure took about 37 hours to make. Students in Frederick Community College’s welding program assisted, and Morris’ friend helped with the LED lighting. It now is on display at the Frederick Visitor Center, where it will remain until it is dropped again on New Year’s Eve this year. “It is sort of the first public art I’ve done, which is pretty neat,” she says.

However, she wasn’t there to see the key drop. She was in California, and will be out of town again this New Year’s Eve when the key drops. She’ll be going back to John C. Campbell Folk School, where she’ll be on staff and take classes October through January.

Hopefully, she says, she’ll be in Frederick the following New Year’s Eve.

There is no census for the number of blacksmiths in the United States. Estimates a few years ago placed the number at between 5,000 and 10,000—about 10 percent of whom were professionals. But interest in the craft appears to be increasing with the popularity of Forged in Fire, a reality television show on the History channel in which world-class bladesmiths compete to create iconic, edged weapons. Another show on the channel, Iron and Fire, features a blacksmith in the Ozarks. “That’s really helping it take off,” says Chris Cash, 34, of Frederick.

Cash has been blacksmithing for about four years as a hobby and says he has noticed renewed interest in the craft. “Blacksmithing as a whole I think is going to blow up,” he says. “People want to get out and work with their hands and get their head out of their phones. Working the metal is fun, but seeing the finished product is the best.”

Cash and Morris both are members of the Blacksmith Guild of Central Maryland. Ken Strosnider, of Detour, also is a member. He’s been blacksmithing for 20 years and describes the usual crowd as “big guys with beards.” There are few women in the field, he notes. “But that doesn’t mean they can’t do it.”

Indeed, many of Morris’ students are women. And Morris makes a point that you don’t have to be a bodybuilder to swing a hammer. Use gravity, she says; it’s easier.

Morris teaches dozens of classes a month at her school, a space she shares with Vagabond Metalworks. She also teaches classes throughout the East Coast. “Interest in blacksmithing is at an all-time high right now,” she says.

She wants to move into a larger space within a year, so she could hold classes of between five and eight people. Now, she is limited to a few students at a time. The larger classes would help reduce the price and increase accessibility.

The classes now are $149 for one person, but students can bring a friend for free. Beginners typically start with a 2.5-hour class in which they make a wall hook.

Morris’ students’ describe her as warm, patient and incredibly passionate about her work.

Steve Wilde, 60, of Gaithersburg, took one class with Morris and immediately bought a five-class package. “She is laid back when she can be, but firm when necessary—safety first, always. She tells you what you’ll be doing, then shows you, usually in clay then in steel, then let’s you do it,” he says.

Tammy White, 44, of Middletown, says she was initially intimidated when she signed up for her first class with Morris in January. “The fire. The tools,” White says. “You see all these big brawny guys.” Now, White says she’s ready to go back, this time to make a trivet.

Casey Day-Kells, 45, of Frederick, took a class with a friend in February and enjoyed it so much that a few weeks later her daughter, Maddie Schuch, 17, also brought a friend to Morris’ class. “Caitlin was amazing,” Day-Kells says.

She says Morris was able to explain the process and make them feel confident, while allowing for some creative decision-making as they made wall hooks. “We’re bending steel with our bare hands,” Day-Kells says. “That was pretty amazing for us. It felt really empowering, especially as a woman, trying this out and being taught by a woman.”