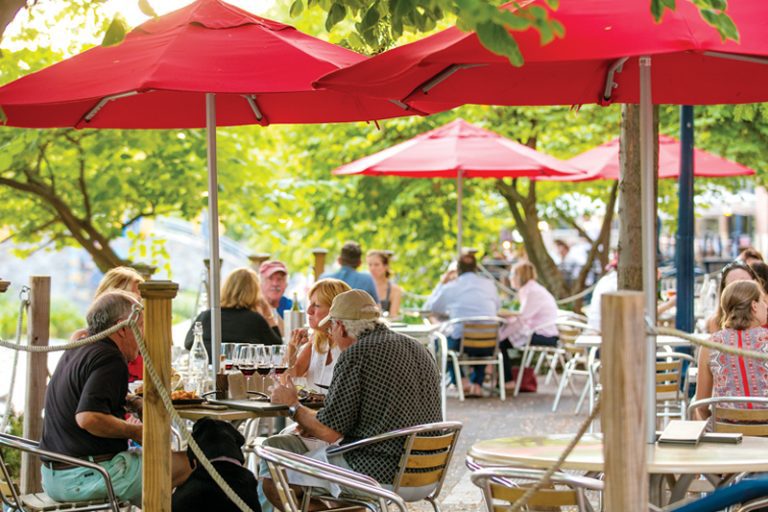 Beneath Skies or Stars Dining is Special Outdoors

If the 70-degree temperatures at the end of February didn’t tempt the winter-weary to seek a dining table outdoors, nothing will. This year the typical sound of a shovel removing snow and ice from the sidewalk was replaced with the scraping of knives and forks on china at street cafes.

“Ah, the weather,” says Anteneh Gelagel as he looked skyward from the patio at Ayşe Meze Lounge in Everedy Square on North East Street. The Virginia resident works in Frederick and on this day was finishing lunch with another man. “I prefer to be outside when it’s like this,” Gelagel says, “watching people and seeing what’s going on.” His companion says “it feels like you’re relaxing” when you dine outdoors.

Most of the time we eat our meals seated in a chair at a table inside, the routine changed up with the gulping of fast food in the car or balancing a plate in front of the TV while fending off the cat. But there are also times when we heed the call of the outdoors, whether it’s roasting hot dogs over a campfire or spreading out a picnic on the lawn. Local restaurant owners understand the allure of alfresco and increasingly have carved out spots on terraces, porches and sidewalks to accommodate it.

“It’s a great window on the world,” says Jennifer Dougherty, owner of Magoo’s Pub & Eatery on West 2nd Street. The pub can seat about 20 people outside on wrought-iron furniture shaded by umbrellas as well as a large tree with spreading branches. Situated on a side avenue, there isn’t the bustle of Market Street, yet you can still people-watch and witness any street action.

Dougherty says the space is great for lunch during the day and when the sun goes down the outdoor lights come on to create a different atmosphere. “We’re pretty relaxed and mellow,” she says, at the same time recalling a St. Patrick’s Day five years ago “when it was 80 degrees outside” and the outdoor space was called into play to accommodate revelers.

Frederick’s City Hall and the county liquor board have rules governing outside restaurant dining, including that the space be designated by permanent, yet movable fencing. Many of the businesses use wrought iron that fits in with the historic vibe of Downtown.

At Cakes to Die For, a bakery at 154 N. Market St., the strongest beverage served is coffee, so there’s no need for a fence. Instead, owner and baker Lucie Shelton created a veritable Garden of Eden last summer, nestled among city concrete, with huge pots of pink roses, hydrangeas and cascading purple petunias sharing space with stools and high-top tables. Some rocking chairs were thrown in for good measure. “My dad is a landscaper,” Shelton explains.

The baker says her customers enjoy the outdoor space and it’s not unusual for people to take photos of themselves among the plants. “I know it sounds corny, but it really is a chance to stop and smell the roses,” she says—as well as the intoxicating aromas of cinnamon and other baking ingredients coming from her kitchen. She admits it’s a good marketing ploy if passersby notice what customers are eating and then decide to come through the door for some of the same.

Shelton’s desire to create a welcoming space comes from a childhood spent visiting her grandparents where there was a backyard porch, a garden and rocking chairs where she would spend hours. “I love sitting in a rocking chair,” she says.

As to the appeal of outdoor dining, Shelton suspects that “people are looking for a different point of view” after spending much of their day inside an office cubicle. “It’s nice to see them enjoying all this.”

The More Outdoors the Better

Phil Bowers, one of the partners of Fountain Rock Restaurant Management Group, embraces the concept of alfresco to the point that all five of the company’s Downtown Frederick restaurants have outdoor seating. “It’s a good thing that people want to be outside,” Bowers says. “It’s healthy; it makes you feel better getting a little Vitamin D.”

Brewer’s Alley at 124 N. Market St. nearly always has its front patio filled to capacity when the weather

is nice and for a time it staked off the back parking lot for weekend overflow crowds. Now those crowds are being seated in the recently added roof-top dining space with its granite-topped bar and tiled floor. Granted you’re not getting a breath-taking view of nature up there, but there’s also something a bit hip about being in a city, looking down on the street below, across at a parking deck or another roof-top.

Also, during Brewer’s remodeling a downstairs dining room was outfitted with walls of glass doors that can be flung open to let in the outside. But, just as anytime you’re playing with the weather, there’s the unpredictability

of a storm blowing through. “A thunderstorm can hit and then 15 minutes later the sun is out,” Bowers says, which means you may be shuffling customers in and out. For the true fans of outdoor dining, weather isn’t a consideration—just look at all those people wanting an outside seat when winter stages a thaw like this year and tempered temperatures makes it possible.

While most of Fountain Rock’s restaurants are situated so people can see and be seen, there’s also “Eleanor’s Secret Garden” in the back of Reina at 129 N. Market St. Named for Bower’s mother, there’s peacefulness to the space. Tucked between buildings, the flagstone terrace is flanked by herb gardens, hosta and fern beds, a giant holly bush decorated in white lights, and a stone goose. Flowers are also in bloom, sometimes ending up in vases on the tables. One Reina staffer says most don’t know the garden exists, but once they do it’s often their spot of choice. “It’s so quiet, no noise from cars on the street.”

Nido’s Ristorante, 111 E. Patrick St., also has a special place to the rear of the restaurant. Walk through a wooden door on the street and follow the twinkle lights to a patio that some customers have likened to being in Italy. “It’s nice and romantic,” says Nido’s co-owner LiAnne DeLawter.

The garden was recreated last summer with comfortable seating, water features and a profusion of plants. DeLawter says this summer may see the inclusion of an herb garden. The patio is covered, so no need to worry about the rain, yet at the same time “you still know that you are outside.”

DeLawter says a large appeal to the place is leaving a bustling sidewalk “not expecting that you will find this beautiful oasis. It’s very relaxing to be outside feeling the air, the sun.”