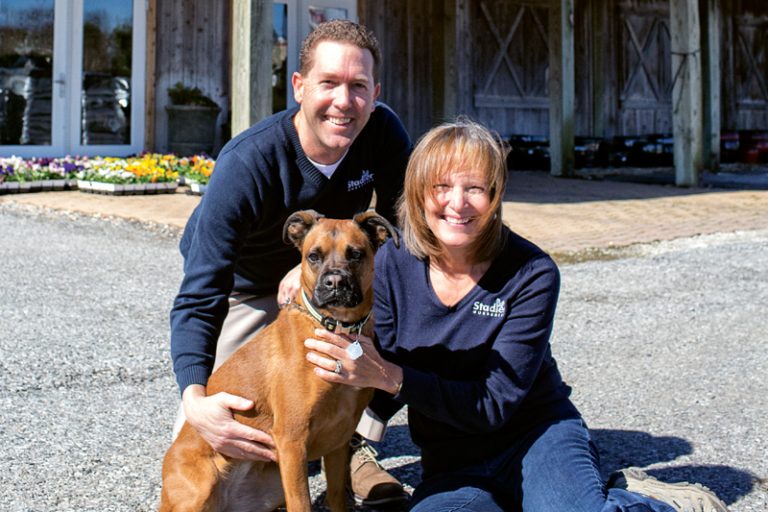 Swiss immigrant Paul Stadler arrived in Washington, D.C., and “felt it was good for gardening,” says granddaughter Lisa Stadler. He took a job maintaining the grounds of a Washington inn where he met Rebecca, a farmer’s daughter from Fulton County, Pa., who was working in the kitchen. Everything fell into place to launch a marriage and a nursery business that includes garden centers in Frederick, Laytonsville and Manassas, Va. This year marks 85 years in business for Stadler Nurseries.

“My grandfather died when I was 5, but I definitely remember working with my grandmother,” a hard-charging woman who would dig azaleas out of the ground for customers like it was nothing. Lisa and her brother, David, were relegated to weeding and watering plants. “They had one of the first Coke machines,” she says. “We got paid in Cokes.”

The business was eventually taken on by Peter and Janet Stadler, the next generation, and when they retired it passed to their children, Lisa and David. The fourth generation of Stadlers has had a hand in the family business, but as to making it their career, “there’s no pressure, just like it was for us,” says Lisa, who has a degree in economics. “Nobody in the family formally studied horticulture,” she says, although “we all became certified horticulturists.”

She recalls how her grandfather was a gardener for many of the old homes in Washington, growing stock for his customers.  The industry changed from personal gardeners to landscape companies and the Stadlers followed the trend. “They started growing trees and then there was a garden center,” Lisa says. In addition to selling plants, shrubs and trees to landscapers, Stadler also had clients with the National Park Service, the Smithsonian, National Zoo and the White House. “That really exploded with my Dad,” Lisa says.

The business is staffed at some times during the year with as many as 100 employees to fill the demand for showcasing nature. One of the many specialties is the cultivation of plants that are native to this part of the country.

Lisa says that even in the midst of running the business, she retains a love for sinking her hands in soil, but added with a laugh, “I’m a lazy gardener. I believe in the right plant for the right place. Little or no maintenance is my goal.” Two of her favorite flowers for gardens in the Frederick area are vinca and angelonia—“they can take anything”—a resilience that’s also apparent in a business that’s lasted all those years. www.stadlernurseries.com

As a way of reducing its carbon footprint while realizing financial savings, the Housing Authority of the City of Frederick has completed the installation of solar panels on two of its buildings—the Bernard Brown Community Center, 629 N. Market St., and Catoctin Manor, 798 Motter Ave., an apartment building for seniors.

Sustainable Energy Systems, a Frederick company owned by Zayn Bradley and Rollie Belles, did the work that included hoisting 286 40-pound solar panels to the roof of the four-story apartment building. Belles says the energy generated will service the buildings with the excess going into the power grid resulting in credits from the electric company.

E. Kevin Lollar, executive director of the housing authority, sees a 9 percent monthly savings at Bernard Brown and 12 percent at Catoctin Manor, but “more importantly, it’s 2017 and everyone should be using renewable energy sources.”

Belles believes “it’s a win-win,” with savings to the housing authority and support of local business. The company started in 2008 in the midst of the recession and has grown to 28 employees.

A newly formed nonprofit, 29:11 Group, is hosting a conference from 9 a.m.-4 p.m. on April 22 at Faith Baptist Church, 2212 Jefferson Pike, Knoxville, designed to give young women “the tools, information, encouragement and support to face life’s challenges and maximize their potential,” according to organizers.

Along with music and discussions about self-confidence, relationships, bullying, body image, discovering talents and building a future,  speakers will include Nicole and Kendra Knight, entrepreneurs in skin care and cosmetics and owners of Smooch Studio; Andrew Simpson, founder of Player’s Fitness and Performance; and Tanya Pershin, former head cheer coach at Walkersville High School.

Debby Neely, group founder, says watching her three nieces “growing up and the challenges they faced” made her want to start the program. “They have a strong support system; what about those who don’t?” Her team also includes Jenny Jones, JoAnn Auger and Kim Bradley. www.2911group.com

We are looking for people with the best summer cocktail (or mocktail) recipes. Is it a twist on a classic or a completely new invention? We will taste-test drinks from a group of finalists to determine the winners, which will be featured in the July Frederick Magazine. Send your recipe and contact information to [email protected] before May 15. Cheers!