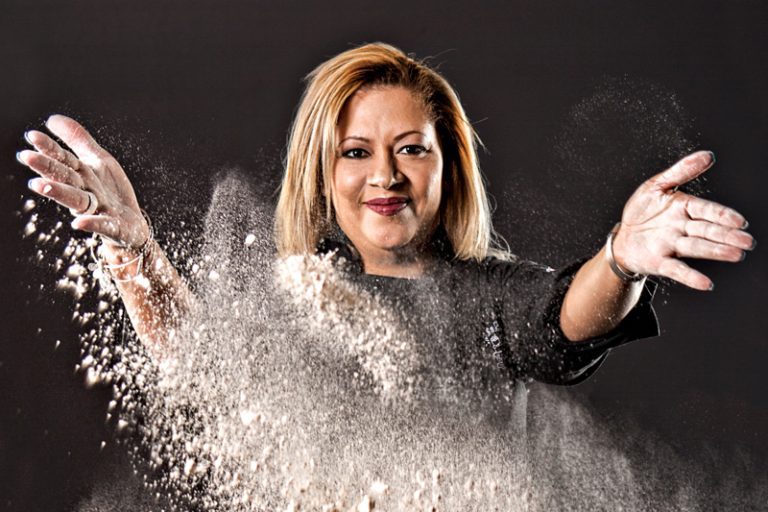 Feeling the Heat of the Kitchen in the National Spotlight

Andy Warhol once quipped, “In the future, everyone will be world-famous for 15 minutes.” He joked about how fame can strike, shake things up and dissipate as fast as a freak storm, but he had no idea what reality TV shows would eventually do for regular people. Thanks to this modern dynamic, limelight opportunities abound. Those with a unique skill or situation and an engaging personality can apply for their choice of shows. Casting directors select who gets another look. Then the storm begins.

Pick a topic and there is probably a show about it—especially when it comes to food. We watch cooking demos and salivate. Throw in dramatic competition, with alluring prize money, and viewers take notice. Where cooking was once an honorable drudge, shows like Iron Chef made it sport-theater fusion. By the first commercial break, a contestant grabbing the brûlée torch is like watching an athlete sprint toward the goal. Our darling chefs rate celebrity status.

Frederick’s top-notch restaurants and thriving foodie culture give us our share of local “celebrity” chefs, too. Bryan Voltaggio opened the door, appearing on Top Chef and Top Chef Masters, and now there is a new generation of local “celebrity” chefs. We caught up with four local cooks who followed Voltaggio’s lead, proving that they can take the heat of the spotlight and the stove.

Before appearing on Food Network’s Chopped, ML (Mary Lawrence) Carroll stumbled into cooking. She says with a chuckle, “Growing up, I wasn’t allowed in the kitchen. I was a menace.” But, business opportunity sparked new passion. “I was a food and beverage director for a country club … [and] the day I was let go, a couple called and asked me to cater their wedding.” Luckily, she knew people who could help. She started Canapés catering in 1989.

Self-taught, she learned from friends, associates, books and television. Martha Stewart was an early inspiration, as was Julia Child. In the stack of cookbooks at her 7,500 square-foot headquarters in Highland Tech Park is a special treasure, a signed copy of Baking with Julia. Carroll met Child in the early ‘90s at The Greenbrier in West Virginia. “She loved the name Canapés,” says Carroll. Child loved it so much, she picked up Carroll’s resort tab. A checkout clerk shared the news, “You have a fan.”

Carroll calls 2007-2012 “the dark ages,” when financial ruin clobbered Canapés. She rebuilt, eventually setting up shop at ThorpeWood retreat in Thurmont, which reached out offering support, she recalls: “We have a shower, a kitchen and a couch you can sleep on.”

The third time fate called, it was Food Network’s casting agency. It reviewed her previous applications for The Taste, which was canceled, and Top Chef, where she made it through several rounds of auditions. Within months, she was competing in New York City. “I smoked them in the first round,” says Carroll, who was a ball of nerves during filming. Some of the required ingredients were chaudin (pork stomach), vodka sauce, spring peas and sorghum grain. She made it through the first round before being “chopped” in the second of three segments. “It was really exciting,” gushes Carroll. Good thing, because agents quickly invited her to participate in Cake Hunters on a sister network, the Cooking Channel.

Now, Canapés is in the Food Network’s loop. “They liked us,” says Carroll. “They’ll come back if the show is renewed.” She’s also being considered for Gordon Ramsay’s F-Bomb and a new show that’s still hush-hush. Her appearances aired in late 2016 and early January 2017, so she hasn’t had time to see many changes. Her advice to others: “Practice, study, wear your heart on your sleeve, and don’t take yourself too seriously. Lazy chefs don’t survive.”

Brandon Sumblin is chef at Serenity Tearoom & Fine Dining on West Patrick Street, a family restaurant led by his mother-in-law, Blanch Henry. He says it’s a blessing to work with loved ones, including his wife, Tiera, who is Serenity’s baker. Both graduated from Johnson & Wales University with degrees in culinary arts. He credits heavenly guidance for getting him on national TV. Over the last five years he applied for Food Network Star, Cutthroat Kitchen and Beat Bobby Flay, with no success. In 2016, the flood gates opened. Agents offered unexpected interviews for Cooks vs. Cons, Chopped and Hell’s Kitchen. “It’s crazy how they all happened back-to-back,” says Sumblin.

He scored a place on Cooks vs. Cons against another professional and two “con” amateurs. Episodes feature iconic dishes with twists. “I was the youngest competitor there,” he says, then 22. Jitters crept in during the walk-through, but he says he felt God’s peace once filming started. “The biggest surprise was how calm I was.” One challenge required making crabcakes with frozen vegetables, sacrilege to a Marylander. Sumblin responded with a sweetcorn mayo to bind the delicate lumps of crab and, ultimately, won the day. Now the “Cooks vs. Cons Crab Cake” is on Serenity’s menu.

When the show aired, 40 relatives gathered for a viewing party. Most satisfying, says Sumblin, was cooking for his 92-year-old grandmother who came from Virginia to watch and dine at Serenity. “That was the first time since I earned the title of chef.”

People occasionally ask for pictures or autographs, but Sumblin insists he feels the same as before the show. “My Daddy always told me to stay humble.” Hard to do, now that he’s also a meme. Someone appropriated a clip from the show where a competitor jestingly blows a kiss, which Sumblin “catches” and throws away. He blushes, “It’s still circulating on Facebook and Instagram every time the show airs.”

There’s more on the horizon for Sumblin and family. Tiera applied for Bakers vs. Fakers and the Serenity team finished another show, but are bound by confidentiality agreements until further notice. “I would love to do Top Chef in a few years,” admits Sumblin, who also gets customer requests for a cookbook. Meantime, Serenity added a cache of gluten-free versions of traditional favorites, including chicken and waffles, alongside their unique tea-inspired creations and other upscale fare. For others following in his footsteps, Sumblin offers, “Don’t give up. Everything will be OK.”

JoAnn Maguire, of Designs by JoJo (formerly Sisters Bake Shop), got her turn on TV through a casting agent who happened to be visiting relatives in Potomac. The agent called after reading about Maguire’s business and her aspiration to be on Food Network. “I thought it was a scam,” says Maguire. The chance connection landed her on Cake Wars’ season one Christmas series in 2015.

She describes the process from first contact to broadcast as “exciting and scary.” And long. It took several rounds of approvals, via self-taped auditions. It’s a test of persistence and compliance as much as a showcase for personality. The producers also require background checks and contracts covering multiple appearances, as well as strict confidentiality. Maguire reinforces, “They really want to get to know who you are.” Good sportsmanship is a common thread, too.

Chosen bakers are initially assigned to teams of three. Collaborating with strangers under pressure is part of the deal. Maguire’s team, Santa’s Little Chefs, won the “Stocking Stuffer” challenge with a modeled Rudolph, knitting a stocking, atop a decked-out cake. Another episode focused on creating an alternate “sled” for Santa. “Because I am a volunteer EMT and firefighter,” says Maguire, “I suggested making a fire truck. It was a tribute to all the firefighters around the world.” She appeared on four of six episodes, filmed in LA.

Some 200 of Maguire’s closest friends attended a premiere party hosted by Rex’s restaurant in Downtown Frederick. A marathon of her shows replayed to intro season two. The experience also introduced Maguire to top-level industry professionals, including Kerry Vincent, who enlisted her on a grand-scale project at the Tulsa State Fair last October. Their 45-foot-long 3-D “Peace Train” exhibit involved 30 sugar artists. Maguire provided design and all air-brushing.

Her best advice for would-be talent is good for any career. “Keep working on your portfolio. …You have to be driven and focused and organized.” Since the show, Maguire added hair and makeup styling to her repertoire. It’s another creative outlet and “an opportunity to positively impact someone’s self-image.” She graduated with honors from The Temple—A Paul Mitchell Partner School and has a chair at Studio 509, often working with Capitol Bombshell photography or attending fashion shows. She still bakes, too. Next on her wish list: “I would love to get on Halloween Wars.”

Danielle McNerney earned two television credits before she turned 14. She was always interested in cooking, regularly watching Food Network after school. One of her favorite kitchen tools is a pasta maker. She got it before thinking of being on TV. When her mom, Meredith, was diagnosed with cancer, the duo sought wholesome, tasty recipes to support good health. Two positive developments from the ordeal: Meredith founded A Message of Hope Cancer Fund, a regional volunteer organization that helps people struggling through cancer; and Danielle discovered an enduring passion for cooking, with love.

McNerney first applied to FOX’s MasterChef Junior, but someone in casting suggested Food Fighters. The show pits a home cook (usually an adult) against five chefs, one for each round, with a $100,000 grand prize. The money could help her mom’s charity. “Playing for a purpose really motivated me.” She remembers how excitement overrode nervous energy. “As soon as I got into the [studio], I realized ‘this is just a kitchen.’”

McNerney, then 12, dished out hand-made pasta, pork chops, and seared scallops, toe-to-toe with professionals.  She sparred with Baltimore’s Duff Goldman (Ace of Cakes) in the final round with garlic-butter steak tostadas and roasted-pepper salsa. McNerney didn’t win, but she did take home a $20,000 donation from Walmart and a new appreciation for competitive cooking.

The whole family got into preparing for her appearance on Chopped Junior. They staged practice contests, selecting odd ingredients and setting a 30-minute timer. With typical can-do spirit, she says, “If I didn’t succeed, there were things I could work on and practice.” As it turned out, contestants didn’t get anything “super weird, like a pig head or a cow tongue.” They did get kohlrabi and gumdrops, which McNerney turned into a mac and cheese dish that she gets requests to make. “Oddly enough, I practiced with those exact same gumdrops.”

Aside from her serious cooking chops and augmented college savings account, McNerney says life hasn’t been too different since she won. She still has homework. “I’m not sure what I want to do when I get older.” She’d consider broadcasting or cooking. “It might be nice to own a catering company because you can personally know who you are feeding. When it comes to food, that connection is amazing.” She offers sage advice: “Everyone starts somewhere. … If you have a dream, go for it. … Set the bar high.”