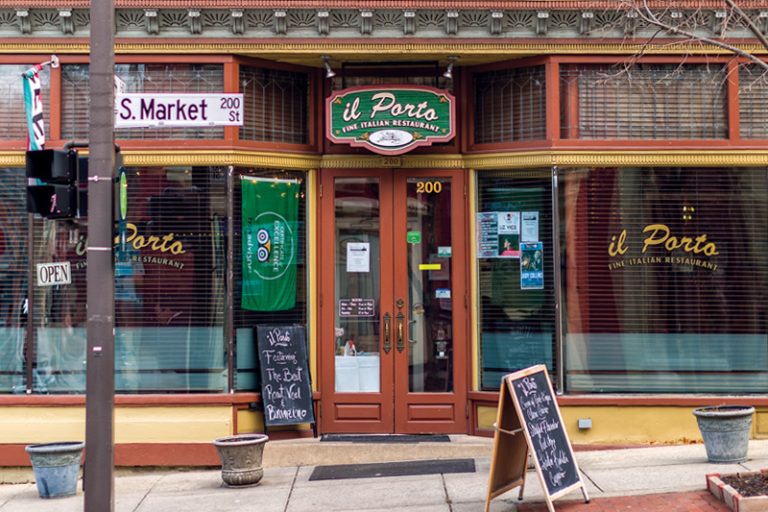 Il Porto’s protective vestibule on South Market Street is like a portal that bends time and space. A mere two paces take patrons from a reserve of early American history and architecture into a sheltered courtyard of tables akin to an open-air ristorante on the Mediterranean.

While late winter’s weather tantrums bluster, the scene inside is warmly set by a mural of shutter-framed windows that peek into homey still-life views. A hint of artistically rendered brick in apricot hues behind rustic weathered plaster adds to the effect. Throughout the cozy space, tones of sherry and cream complement il Porto’s modest dark wood and white linen décor. Such understated simplicity, like its core menu of traditional favorites, is the key to il Porto’s enduring success.

Alberto Cruz opened the first il Porto in Gaithersburg in 1996. His story is the classic tale of a young Salvadorian immigrant, hungry for the American dream, whose culinary career starts with his hands in a dishwater. He learned to appreciate Italian food as he worked through the ranks of the restaurant industry, through line cook and server to restaurateur. Cruz’s nephew, Obed “Cooper” Nolasco, joined the business in 2000 and migrated to Frederick as co-owner and manager when the family opened a second location in 2007. Regular customers know Nolasco’s wide smile as a fixture at il Porto’s northern outpost. He describes the place as a mix of both worlds, sort of Florence meets Frederick.

Nolasco cheerfully details il Porto’s roster of handmade pasta to illustrate the restaurant’s attention to authenticity. “We do all kinds of ravioli, sometimes lobster or spinach, lasagna, manicotti, meat cannelloni,” he says, infusing the appropriate words with a spiked Italian inflection. “Our bread and pizza dough is made in-house, too. We have a good thin crust white pizza with Fontina cheese. It’s very creamy and not many places use it.” The house red sauce is made daily, using notes of sweet carrot and fragrant wine. Nolasco confesses that his favorite dish is the clams and linguini bathed in a buttery white sauce, flecked with garlic and herbs. In season, the kitchen incorporates locally grown tomatoes, basil, zucchini and other veggies sourced from farmers’ markets.

In a traditional, formal setting, meat and pasta would be served as separate courses, but il Porto often pairs a side of sauced linguini and seasoned vegetables with its hearty beef specialties. Two time-intensive dishes anchor the menu: ossobucco (a marrow-filled crosscut of braised veal shank) and roast veal. Nolasco says, “We prepare a whole rack and slow roast it for four hours.” Slices are served in an unctuous sauce of beefy juices with white wine. Fans proclaim this veal “the best in town,” a designation, backed by posted award plaques, that pulls Nolasco’s smile even wider. Plump sausages, chicken cacciatore, pork chops or petite grilled lamb chops top the tables of hungry carnivores alongside the savory veal, as the speakers overhead pour out Italian opera in a tenor’s voice.

The bounty of the sea is represented on il Porto’s menu, too, as befits a restaurant named “the harbor.” Typical specials include jumbo lump crab cakes and crispy whole flounder with sweet apricot glaze. Branzino, the Italian name for a silvery sea bass popular in Europe, makes regular appearances as the catch of the day with dishes of stuffed flounder and Filleti di Pesce. The latter is a delicate fillet of rockfish crusted with parmesan, topped with lumps of rich crab and a lemony butter sauce with shallots. A host of shellfish are dressed with red or white sauce, garlic and butter, or served in classic preparations of diavola, parmigiana or alla panna.

Back in the bustling kitchen, chef Tito Henriquez channels his decades of experience into each creation. He started at il Porto in Gaithersburg after working at Filomena’s, a celebrated “old world” ristorante in Washington, D.C.  He earns praise from Nolasco: “He likes to be creative with the menu,” he says, noting the chef’s popular take on cioppino, originally a humble fisherman’s stew, cobbled together by Italian-Americans on the West Coast with bits of the day’s catch in savory broth. Each man would contribute a bit of fish to the communal cookpot. Modern cioppino is more of a high-end treat. Here it is loaded with lobster and shrimp, splashed with an uncommon hit of silky cream and Old Bay seasoning to fortify its typically thin tomato base.

Antipasti of fried artichoke hearts or melone (cantaloupe) and prosciutto make good nibbles to go with il Porto’s drink specials. Bottles of wine are half-price on Monday. “Tini-Tuesdays” spotlight the restaurant’s page long list of martinis. Nolasco points out the fan favorite, the Blushing Lady, a fruity blend of PAMA Pomegranate Liquor with Stolichnaya vodka, pink grapefruit and lemon in a sugar-rimmed glass. Classic and dirty martinis play counterpoint to variety flavors such as cucumber, mango, blood orange, espresso and even coconut-hazelnut.

On weekends, il Porto’s 80 seats are typically packed with diners, so reservations are strongly encouraged. On weekdays, the restaurant offers lunch specials such as veal Margherita with eggplant and cheese or a pasta combo with three favorites, including the handmade ravioli. With the right companions, a pitcher of sangria and a warm basket of bread, lunch can easily stretch into a languid midday repast, in true Italian fashion. The alcove near the big front window is often filled with friends gathered for birthday celebrations, showers, wedding rehearsal dinners and office luncheons. For bigger events, il Porto offers catering. Warmer weather will bring café-style seating outside.

“The best award that we have is the repeat clientele,” says Nolasco, noting his personal satisfaction in seeing familiar faces return each week. He tells coworkers, “If people make the effort to come here and find parking, we have to appreciate that effort and do our best in return.” He wants each customer to feel special when they walk through the door, and that all begins with two steps and one big smile.