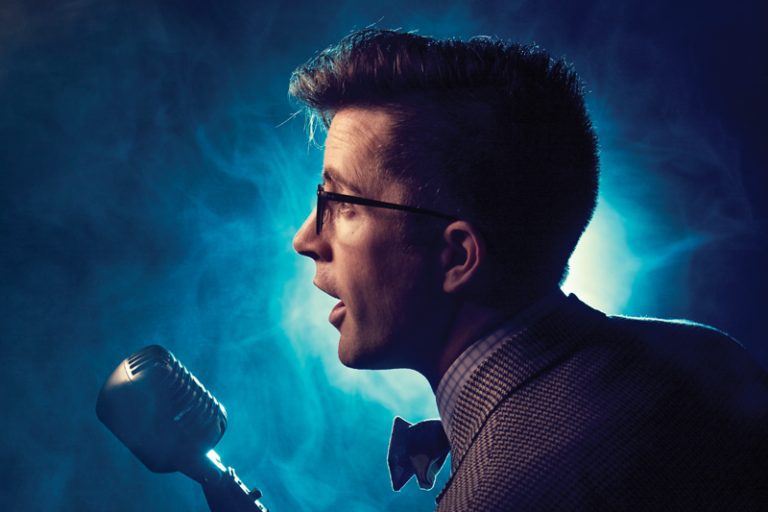 Jack Sincevich cuts quite a figure when the weather is nice in Frederick.  He saunters, he strolls, he promenades … the proud heart under his bow tie and suspenders thrilling to the tunes pouring from the antique Victrola perched, boombox-style, on his shoulder. It’s as though the 1970’s and the 1930’s met and melded in this one, slim figure of a dapperly dressed young man strolling with all the insouciance of a Parisian dandy with money in his pocket and a song in his heart.

Jack makes his living with the very tools with which he lives his life. His vintage suits and boots, his old-timey music and reverence for vintage vinyl and the hot rhythms of the Jazz Age.

Jack, joined by his brothers, Alex and Sam, and “brother from another mother” Will Cole, are the Dapper DJs, a service rooted in Gatsby’s yesteryear where suits are fine and the taste in music much finer. They use restored Victrola phonographs, and play “old-timey” music from the artists and bandleaders from the 1920’s through the current day.

“When this was all born, I’d been a DJ already for about 15 years,” says Alex Sincevich, the founder of the business. “But the Dapper DJs started when one Christmas I had nothing to get my mom, because I’d run out of ideas and money. There was an antique Victrola phonograph that had been in the family for years. I’m a tinkerer by nature and I took the thing apart and got it running and gave it to her for Christmas. While I was doing that, I dove into the old records and got bit by the hot jazz bug. With the encouragement of my wife, I decided to play those old records when I was doing my DJ gigs. Eventually, I started going to antique and vintage stores all around Downtown Frederick to get an idea how to get started. That gave me the idea of dressing sharp and doing events.”

Still, he had doubts. “I never knew if this thing would take off. It’s always just been an extension of my personality. It’s just offbeat and quirky and it fed that part of me that needs to express that weirdness. … I’ve always had a vintage heart and the old records fed that heart and I wanted to share it with whoever wanted to pay me a nickel and let me play.”

The Dapper DJs work to set themselves apart from the pack of wedding DJs crowding the banquet halls of the Wedding Industrial Complex, through their outfits, the concentration on playing timeless music that makes people feel good and the sheer wild enjoyment at their gigs. “People dig the vintage vibe we put out,” Alex says. “We use old, chrome mics, dress in bow ties and carry our stuff in suitcases. We love the old vinyl records.”

“We like to have a band presence … we have digital abilities, so we can play modern music at the flip of a switch, but we dress dapper and play the old-style music,” Alex adds. “We draw inspiration from the Gatsby era and I think that what is appealing about us is the authenticity and the novelty that you only get with us. I don’t want my head to get huge, but we want to offer something way different and fun and our clients trust us to bring that to the table. We often get told that we bring a band vibe to the thing. We give impromptu lessons in dancing the Charleston, and if the couple is into that, we’ll do it. I know it’s cheesy but it’s like Brie on toast; we do spread that cheese around like butter.”

And if you are thinking it is all just an act, “It was never about the money for us. We just wanted to be true to what we love. My brothers of the Gramophone just really took to this and adopted the vintage lifestyle. You can see us really walking around in bowties and seersuckers. We wear the real stuff in real-life. I like to wear old tweed … it’s what’s comfortable. We try to live and play music as an extension of our lifestyle.”

From Jack and his Frank Sinatra and Bing Crosby-fueled ambling around Downtown, to Alex, Sam and Will’s love for making people feel good, these debonair young men own their look. Sam, the smooth-talking MC with his penchant for speaking the old slang from the flapper era, delivers with a wink, a nod and a tip of a Derby. Will

has, according to Alex, “a vintage heart” and he loves everything about his job. He loves teaching the impromptu dance lessons and thrills at the sight of people hoofing it on the dance floor.

It’s from late spring until early fall, the busy season for those in the wedding biz, when things for the Dapper DJs start hoppin’. “May through October is a long busy season. See, initially we started kind of gaining recognition playing as street performers and that, for a long time, was where our heart and soul was, playing for people outdoors.”

When asked what he most loves about his job, the answer comes without hesitation: “I can’t believe the enjoyment I get out of entertaining folks. Seeing them enjoy themselves and having the awesome responsibility of keeping them entertained and excited … being successful at that? You can’t beat it. It’s really rather selfish, but I get really high off of the energy, and that is a feeling I can’t get enough of. It’s what I live for and for a brief moment in time we’re all connected as one beating heart and that’s just a pretty cool feeling. It’s not about the money. It’s about everyone connected for that moment. We sell ourselves on our authenticity and the enjoyment of what we do.”

While the Dapper DJs do private gigs and sometimes play street performances, maybe the best way to see them is to get married and book them for your reception. It could be worth the trip.