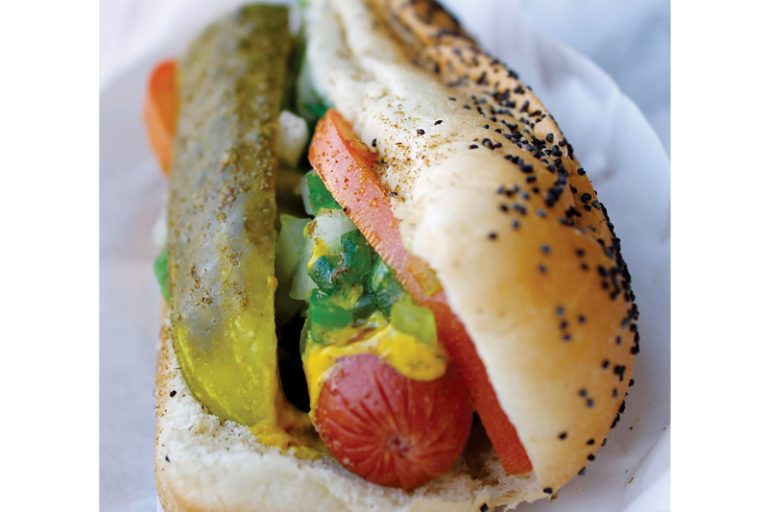 The counter guy wearing a Chicago Cubs shirt describes the Windy City Red Hot as a hot dog “that’s been dragged through the garden.” Indeed. The 100-percent-pure beef wiener is smothered in onions, tomato, peppers, pickle, mustard, relish and celery salt on a poppy seed bun. Windy City Red Hots, 50 Carroll Creek Way, Suite 150, is owned by husband and wife Angel and Pia Miranda who have brought the taste of Chicago to Frederick, just as they previously did to the people of Leesburg and Ashburn, Va.

“We love the vibe here on the creek and are excited to be part of Downtown’s flourishing restaurant community,” Angel Miranda says.

In addition to the namesake hot dog, the menu also includes a chili dog, cheese dog, Italian and Polish sausages, Italian beef with a choice of gravy, or the Chicago Tamale—a cornmeal shell encasing ground beef flavored with seven secret spices. Veggie dogs are also an option. Reasonable prices, too, with a Windy City Red Hot, fries and a drink for roughly $6. www.windycityredhots.com

Customers can choose from more than 30 toppings, all for one set price, at the recently-opened MOD Pizza in Westview Promenade. The Seattle-based chain features individual artisan-style pizza and salads made on demand. The business is big on supporting the communities where it operates and on its opening day the restaurant donated all its pizza sales to Generosity Feeds to provide 10,000 meals to the needy in Frederick County. www.modpizza.com

Friends and business partners Matt Thrasher and Paul Tinney have been thinking and living beer of late as they put the finishing flourishes on Rockwell Brewery, 880 N. East St. Thrasher says he initially thought about using his land out in the county to grow hops and start a farm brewery, but after exchanging ideas with Tinney the two decided to set up in town. “He already had the paperwork” in motion, Thrasher says, including the name “Rockwell,” which is Tinney’s street address as well as being included as the name of his hand-crafted guitar business.

The brewery will have a tasting room and there are plans for an outdoor beer garden. Thrasher says that in addition to coming for the hand-crafted beer flowing from 12 taps, patrons will be attracted to “a good experience. We want it to be a comfortable and inviting place.”

The Family Meal, a neighboring restaurant, is primed to provide its talked-about fried chicken for beer-drinkers “and we will have beer that pairs with fried chicken,” Thrasher says. Rockwell plans to have four or five beers that will be available year ‘round with seasonal brews filling the rest of the menu. www.rockwellbrewery.com