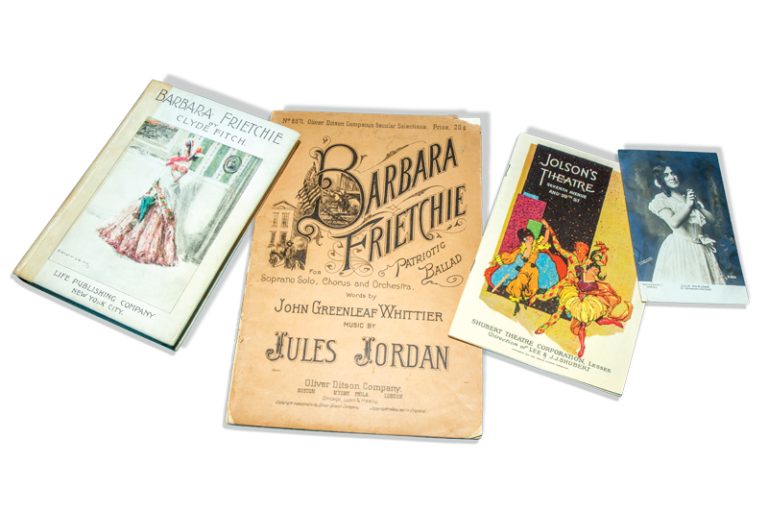 To historians and history buffs, Barbara Fritchie (aka Frietchie) might be Frederick’s biggest celebrity. Scholars say she “put Frederick on the map.” She was already creating a local stir when, at the age of 40, she married a much younger man in 1806.

She was well-read, had no children and lived to be 96. Her fame, however, came after her death when a poem about her was published in The Atlantic Monthly in 1863. Written by John Greenleaf Whittier, it describes an incident involving Fritchie when Confederate troops occupied Frederick during the Civil War. According to the poem, soldiers ripped an American flag off her house. She grabbed the flag and shouted, “Shoot if you must this old gray head, but spare your country’s flag.”

After the poem was published, her fame went “viral.” Despite critics questioning the validity of the story, it spurred on a host of popular materials, visits to Frederick and retail opportunities. In 1943, on his way to meet with President Franklin D. Roosevelt, British Prime Minister Winston Churchill stopped in front of her house and recited the poem. Today, a reconstruction of her house is part of Heritage Frederick’s Downtown Walking Tours. A motorcycle race, a horse race and a restaurant are named after her. The poem also inspired a song, a play, an operetta, three silent films and even candy.

Barbara Frietchie Patriotic Ballad was composed by Jules Jordan and was performed in Boston for a soloist, chorus and orchestra. The play Barbara Frietchie was published in 1900 and performed at Jolson Theatre in New York starring Sandra Bullock lookalike Julia Marlowe. The play inspired a “musical romance” titled My Maryland with an ensemble of 100 performers.