A Railway Ran Through It 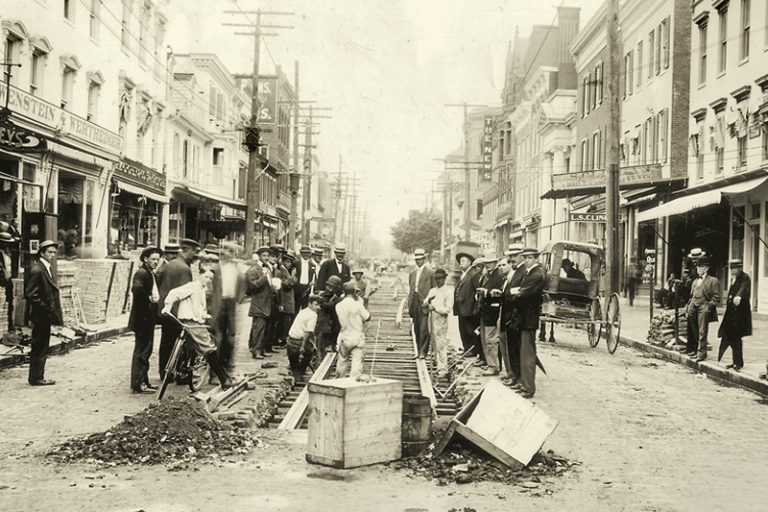 Discovering the Trolley System’s Past … And Future

Standing on the corner of Patrick and Carroll streets, the red brick building that is the former home of The Frederick News-Post has itself been in the paper a good bit of late. Its future wrapped up in the city’s much-debated Downtown hotel and conference center, the building has been featured prominently in renderings of the project. “The overall design is not in our court,” says architect Donald Kann, whose firm is advising the hotel developers on historic preservation issues. “But if it goes forward, we’ve always shared our views on how to adapt and reuse the building and everybody was on the same page on the front end.”

However, the potential renovation and reuse of the 107-year-old structure has often been lost in the sometimes-heated discussion surrounding the hotel project. And that’s a shame, according to Kann. “It’s got its own wonderful story that should be told,” he says. For decades after it was constructed in 1910 as the main terminal for the Hagerstown & Frederick Railway, trolley cars ran through it, connecting this Downtown street corner to numerous other locations scattered around the city and throughout communities across Frederick and Washington counties.

In 1893, a wealthy farmer named George William Smith gathered together a group of area landowners and businessmen and began raising money for a railroad to connect Frederick to Middletown. Who could have predicted then that a modest 9-mile route would grow to become the second-largest electric trolley system in the state?

Work began in 1896, and by August of that year the tracks from Frederick had reached the new community of Braddock Heights—developed as a summer resort and amusement park by the trolley company. “Virtually every trolley company around, in order to promote business, created some sort of amusement park at the end of the line,” says Alex Postpischil, president of the Hagerstown & Frederick Railway Historical Society.

Actually, the Frederick trolley had two attractions. In October, soon after the tracks reached Middletown, a short spur was quickly built on East Patrick Street, just in time for The Great Frederick Fair—which, along with Braddock Heights, became a cash cow (no pun intended) for the company. “Seventy-two percent of revenue is passenger service and most of that is hauling people to the county fair and the park,” Postpischil says.

Freight service, known as Railway Express, made up the rest of the revenue, and was the real benefit to the farmers and landowners who first financed the railroad. “It wasn’t as glamorous, but the freight industry was a real vital link for the farmers in the country to get their produce to market,” says Postpischil. “You can imagine what it was like then, to get a heavily loaded wagon over the mountain,” says Rueben Moss, vice president of the H&F Historical Society.

Not that milk cans and bushels of corn were the only things shipped. “Railway Express was the FedEx or UPS of its day,” says Postpischil. “People would pay 10 cents or 35 cents to have a chair delivered from a retailer in Frederick out to Middletown.” Or elsewhere. By 1898, the trolley had reached Myersville and by 1907 trolleys were running down the Catoctin ridge from Braddock to Jefferson. And in 1909, after stringing electric lines along an older, steam-powered railway that had served Catoctin Furnace, the trolleys were hauling passengers and freight between Frederick and the Western Maryland Railroad depot in Thurmont. “Essentially the H&F was the Western Maryland’s branch to Frederick,” says Randy Anderson, a rail historian and trolley enthusiast from Washington County.

On the other side of South Mountain, Hagerstown was busy laying track, too. “The City of Hagerstown passed an ordinance in 1891 to establish an electric railway,” says Anderson. Although it wasn’t until 1896, that the trolleys were running downtown and out to Williamsport.

Like Frederick, the Hagerstown trolley system soon reached out into other surrounding towns. Funkstown was first, home to Hagerstown’s answer to Braddock Heights, an amusement park in the shady bottom alongside Antietam Creek known at different times as Watt’s Park, Willow Grove and Electric Park. In 1902, the tracks extended to Boonsboro. And to the north, the trolley reached the crossroads of Shady Grove, just over the Pennsylvania state line. “They started going to all these places that had never had a railroad,” says Anderson.

By 1904, the Hagerstown trolley had also reached Myersville, connecting with the Frederick system. The two railroads would be formally linked in 1913, thanks to the efforts of Emory Coblentz. “He was a banker in Middletown and he was the big organizer of the H&F,” says Anderson. As the Frederick Railway’s president, Coblentz negotiated its purchase of the Hagerstown operation in 1912.

Reorganized as the Hagerstown & Frederick Railway, the trolley system boasted more than 87 miles of track. This included both interurban lines connecting Frederick and Hagerstown to various communities and streetcars within each city. “There were a lot of passengers that travelled in the city on the loop,” says Moss.

In Hagerstown, trolley tracks ran a long figure eight that covered much of the city. Frederick’s loop was smaller—along Market, Patrick and South streets and out 5th and Rosemont avenues, through Hood College’s campus.

At its peak in 1920, the H&F carried 3.8 million riders. But even so, the trolley operation was becoming a sideline to Coblentz’s main business. “He was ahead of his time. He realized that the future was in electric distribution,” says Anderson. “They had a commodity that they could sell.” By 1923, the H&F was a mere subsidiary of a new, much larger power company that Coblentz organized: Potomac Edison.

The railway also faced some stiff competition. “As mass production of vehicles grew, it was easier for families to purchase cars,” says Anderson. And for the transit companies, buses also provided a cost-efficient alternative. In 1923, Potomac Edison started its own bus line: Blue Ridge Transport. Initially intended to extend passenger service beyond the tracks, it wasn’t long before management saw the potential savings as a trolley replacement. “You don’t need to lay track, you don’t need to hang wire,” says Postpischil.

The service between Hagerstown and Frederick was among the first routes to go. In 1936, when the new U.S. 40 was built north of Myersville, the highway intersected the trolley line at the top of South Mountain and the H&F decided to sever the link between the two systems rather than pay for the new crossings. “It was a lot of money to be spent and not a lot of traffic to justify it,” says Anderson.  By 1940, ridership had plummeted to less than 500,000.

“There was a resurgence during WWII when there was rationing of virtually everything,” says Postpischil. But by the end of the war, the shutdown began in earnest. In August of 1947, the Hagerstown system ran its last trolley. “My mother and my aunt, when I was 1 year old, they took me on the last run,” says Anderson. By September of that same year, the trolleys from Frederick stopped arriving in Middletown. And they stopped rumbling down Patrick Street the following year.

The Thurmont line limped along for a few more years, making its last run in 1954. And freight service carried on after that. “They put diesel locomotives on it when they got rid of the overhead lines,” says Thurmont Mayor John Kinnaird. But by 1958, the trains had stopped running, the tracks taken up and sold for scrap.

More than half a century later, traces of the H&F still remain. Potomac Edison converted the old terminal building at the corner of Carroll and Patrick into office space, the tracks that ran through its center removed long before the building was sold to The Frederick News-Post in the 1960s. “The front portion of the building still contains some original office partitions and a couple of original safes and I suspect the staircase is also original,” says Mimi Giguere, director of historic preservation for Kann Partners.

More remains inside the Hagerstown car barn, at the corner of Lee and Summit streets. “There are aspects of the maintenance of the trolleys that are still intact—the work pit is still there and the wash bay, and there are still tracks in the building,” says Pete Low, the building’s current owner.

And while the stations at Thurmont and Middletown are gone, others—Braddock Heights, Myersville, Jefferson and Shady Grove—still remain in various uses. The station in Boonsboro has even been converted into a small museum by the National Road Heritage Foundation, something Kinnaird also hopes to do with a Thurmont building that originally served as an electrical substation for the trolley line. “Potomac Edison still owns the substation, but the town owns the building and my dream is to eventually utilize that to make a display.”

The town’s already made a good start, too. Parked next to the substation, on the site of the old station is one of only four H&F cars known to be in existence.

Freight Motor #5, essentially a motorized boxcar, once hauled freight along the Thurmont line. “They built it in-house in their shops in Frederick,” says Kinnaird, who helped the town acquire the trolley from a Pennsylvania museum in 2006.

Another car is parked outside the Hagerstown Roundhouse Museum. “It has the distinction of being the last trolley in Maryland to be involved in an automobile accident. A few years ago someone missed the turn on Burhans Boulevard and hit the trolley,” Anderson says. Another trolley can be found north of the City of Frederick in Mountaindale and has been used as a private hunting and fishing cabin since it was purchased from the railway in the mid-1950s. “The company stripped them; they were sold as shells,” Anderson says.

The fourth surviving car currently sits in a field outside Myersville. For years it was the centerpiece of an annual trolley festival, organized by the late Don Easterday. “That was his dream to own a trolley and hold a festival,” says Moss. But after a successful 18-year run, the festival shut down amid Easterday’s ailing health.

For now, the car remains on the Easterday farm, covered in tarps to protect it from the elements while the H&F Historical Society works to find it a more permanent home. “It may go to the town, they’re not sure yet,” says Moss.

Traces of the old rail lines remain, too. Thurmont converted a trolley rail bed into a shared-used path running the .7 miles from the former station on Main Street to the library on the south side of town. “It’s a well-used trail,” says Kinnaird, “people are down there every day.” And the town is pursing plans to extend the trail south to Catoctin Furnace. “It would make a great anchor point on our end of the county,” says Kinnaird.

It could go farther. In 1999, Frederick County’s Bikeways and Trails Plan identified the potential of a shared-use path along the old H&F line between Frederick and Thurmont. “Potomac Edison still has its power lines through there so the right-of-way is intact,” says Jim Gugel, the county’s planning director, who is in the process of updating the plan. “Considering what’s been done on the H&F trail in Thurmont, I expect that to be a targeted priority.”

Meanwhile, renovation of Frederick’s terminal building, perhaps the largest and most visible remnant of the H&F, is uncertain as the hotel project remains up in the air. But Kann, the architect, remains hopeful for its future: “The building itself has been pretty well-maintained and the basic bones seem perfectly fine,” he says.