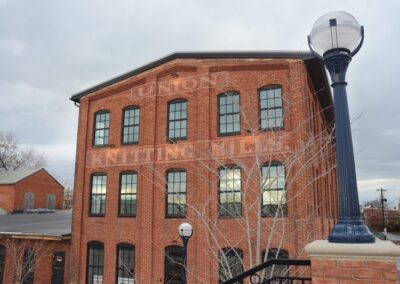 Have you ever wondered what will remain of our homes, churches, offices and civic buildings 200 years from now? Will they stand the test of time to live a second act, or will they be erased from the landscape, either by decay or obsolescence? Or is it possible they’ll be saved and preserved to be looked upon as charming reminders of days gone by?

Frederick County is replete with examples of buildings with “good bones” that held up over the years, enabling them to be converted into modern uses. In planning jargon, it’s called “adaptive re-use.” Factories are now office buildings, a military armory is a rec center and hotels are apartment buildings.

Oh, to know what famed Frederick diarist Jacob Engelbrecht from the 1800s would think of it all.

In some ways, it’s hard to imagine today’s box stores and monolithic office buildings being used for anything other than their intended purposes. Yet it is sobering to think about how different Frederick County’s towns and countryside would look now without the creative visionaries and dedicated preservationists who have found modern ways to use their historic buildings.

Beans in the Belfry

Melanie DiPasquale does not give up easily. So, when she spied the boarded-up old church at 122 W. Potomac St. in Brunswick, she was determined to see what it looked like inside. When she finally stepped through the doors, “I knew this was my calling,” she says.

Not a calling to revitalize the religious congregation that had worshipped there for much of the 20th century, but to restore the quaint little church into a different kind of community gathering spot, a local café that would serve quality coffee, pastries and light fare, including her popular quiche. But first she had to deal with the ghosts of its previous occupants, or at least their remains.

“There were animal and bird carcasses all over, and the original chandelier was like a bird’s nest condo,” she recalls. The stained-glass windows, which had been boarded up from the inside, were broken and the frames were rotting. The original hardwood floors were hidden beneath layers of bird droppings.

It took a year and a half, but with the help of family and friends, DiPasquale arduously reclaimed the building. She and her sister chiseled out many of the stained-glass windows and sent them to a restorer, who used some of the extra glass DiPasquale had found in the basement for repairs. They cleaned and sanded the floors, and the original wooden pews were refurbished. The church’s signature striped bell towers were eventually re-created with the help of historic tax credits.

As they did 100 years ago, the strains of music can again be heard emanating from the church on Sundays, except now it comes from the jazz musicians who perform during Beans in the Belfry’s popular four-course brunch.

It wasn’t easy, but after 13 years in business, Beans in the Belfry has become a Brunswick institution and has given way to another redevelopment project just across the street, the Smoketown Brewing Station, which is housed in the city’s old firehouse.

“I see myself as the temporary caretaker of this building,” DiPasquale says. “There were times when the work was lonely and brutal. But people have said to me that I was the only one who could have taken this project on.”

It might be easy to overlook the red brick building at 12 W. Church St. in Frederick, if not for the oversized ground floor window and its ghostly etched image of firefighters hopping aboard an antique fire engine.

For more than 130 years, the building was home to the Independent Hose Fire Company, the oldest continually operating volunteer fire company in Maryland. Before the company moved to larger facilities on Baughmans Lane, the building accommodated fire personnel and equipment, including the state’s first motorized pumper, purchased in 1908.

The large window that exists today replaced the firehouse’s garage doors when the building was converted to office space. Other vestiges of the building’s original use remain, however, including the bell tower on the roof, which would call volunteers to respond to fires in the city, and a theater with tiered seating that was used for fire company meetings.

For the last several years, Regent Education occupied the building and held its company meetings in the very same theater. In late January, however, the business moved to another of Frederick’s reclaimed properties, the former Union Mills factory on East Patrick Street.

The 19th century building now houses offices for the 21st-century software firm. With its restored tongue-and-groove wood floors, over-sized windows and exposed structural beams and lintels, the restored space reflects a conscious decision by Regent Education to preserve and showcase elements of the building’s earlier use. Exposed gears and pulleys of equipment lifts and overhead trolleys that workers used to slide materials across the large factory floor are still visible.

“We love the eclectic combination of old and new,” says Steve Ellis, Regent’s vice president of recruiting. “We like to try to fit in without building something new so we don’t create more sprawl and crawl. I guess we’re just a bunch of old hipsters.”

In the 1970s, Bert Anderson saw potential in a block of dilapidated row houses and a vacant kitchen equipment factory on East Street. But rather than demolish the properties and start over, he chose to invest in the future by banking on the buildings’ past. Forty years later, the shops, offices and eateries of Everedy Square and Shab Row stand as testaments to Anderson’s vision and perseverance.

Anderson blazed a trail of historic preservation and adaptive reuse that has proven to be a key building block in Downtown Frederick’s revitalization. His same visionary approach to finding new uses for old buildings is on display in his most recent venture, the Monocacy Valley Canning Company building at the corner of South and East streets in Downtown Frederick.

At the turn of the 20th century, as many as 500 employees worked in the building, canning fruits and vegetables from area farms. One can almost see crews at work on the factory floor, where today the original wood trusses are exposed and continue to support the building’s roof that looms three stories above. Oversized arched brick doorways that once accommodated horse-drawn wagons and a large wooden sliding door on a wrought-iron track dominate a large office suite on the main floor.

Several businesses now occupy modern office suites that showcase Anderson’s commitment to historic preservation. The exposed brick walls reflect the efforts of Brian Fisher, a skilled mason and experienced preservationist, who toiled to salvage and re-point nearly 9,000 bricks from the original building. The work is far from over. On any given day, Fisher is still on site, carefully reclaiming elements of the original building and preserving them for modern use.

There are certainly easier ways to develop commercial properties, yet Anderson takes the complexities of historic preservation in stride. “Everybody faces challenges from time to time while doing what they do,” he says. “The best remedy is to just keep on keeping on.”

Mary Louise Riser is no stranger to historic preservation. Seven years ago, she undertook the restoration of a historic home in Downtown Frederick. By her own admission, however, that project pales in comparison to her most recent undertaking: the complete transformation of a much larger 1878 home at 1201 N. Market St. in Frederick. The 8,000-square-foot structure, which many locals will recall was last used as a funeral home, has been transformed into a sophisticated day spa and salon.

Riser took pains to contemplate each room’s natural lighting, materials and decorative elements so she could determine how they would best be put to use in a modern salon. “I spent a tremendous amount of time sitting in a room just to get a feel of it,” she says. “I didn’t want anything I did to interfere with the history of it.”

She envisioned how a built-in china cabinet could be used to display hair products and how her clients could sip coffee and tea around the fireplace while waiting to be served. She could see how the home’s antique chandeliers were a perfect fit for the elegant spaces she was creating.

After interviewing numerous contractors for the job she finally chose Callas Contractors, Inc., because the firm shared her vision. “So many of the people who came through here said I should just tear everything out,” she recalls. “But I wanted to save it, even though they looked at me like I was crazy. I could see it.”

Riser’s careful planning is evident in the richly paneled side room that is now the Manhattan Grooming Lounge and in the styling and make-up rooms where large glass windows flood the spaces with natural light. Upstairs bedrooms have been converted to the day spa’s facial and massage rooms.

In the course of scraping away decades of paint, varnish and neglect, the home’s original German lap siding, hand-painted wallpaper and a massive stone fireplace in the basement were uncovered. Riser made sure they were not covered up with new drywall, but left portions of them exposed so clients can get a better sense of the building’s history.

The work was tedious, intense and expensive. But the end result is just as Riser envisioned it. “I love fixing up an old home and bringing it back to life,” Riser says. “Being a woman, people don’t think you can do it. I have to prove to people that I can.”

Tucked away in the hills of western Frederick County, Ostertag Vistas has been hosting weddings and other private functions in its beautifully restored 19th-century barn for 20 years, inspiring many other similar rustic venues to follow in its footsteps over the years.

Ostertag Vistas’ bank barn was originally constructed in 1850 and although a portion of it was reconstructed in 1926 following a fire, many of the building’s original hand-hewn trusses remain, as does other evidence of its solid German-Swiss construction, including mortise-and-tenon joints and solid 40-foot-long beams.

Donald Easterday’s family settled on the property more than 250 years ago and he was committed to preserving the barn and numerous other pre-Civil War buildings on the farm. By the 1990s, however, time had taken a toll on its roof. “My husband didn’t want to see the building fall down,” recalls Don’s widow, Wanda Easterday.

When Easterday replaced the roof, family members began to see the space in a whole new light. They opened it up for art shows and small private events, and it wasn’t long before those who saw the space started suggesting that it would be a perfect venue for weddings, business retreats and other special events.

Little white lights now illuminate the trusses of their “country cathedral.” The hayloft has been transformed into a skybox that looks down on the open floor and stone fireplaces below. Large windows and barn doors open to the breathtaking views of the 144-acre farm.

Despite the addition of modern amenities such as restrooms, a bridal suite and groom’s room, the barn reflects its sturdy, simple roots. The roof beams are exposed, creating a repeating geometric pattern that is both functional and artistic in its simplicity.

Donna Easterday estimates that nearly 1,000 couples have celebrated their weddings at Ostertag Vistas over the past two decades. And the magic of the setting often brings them back on their anniversaries, sometimes just to walk around the property to relive their happy memories. “My dad loved sharing the history of this farm so we consider it a privilege to host people’s weddings here,” she says.