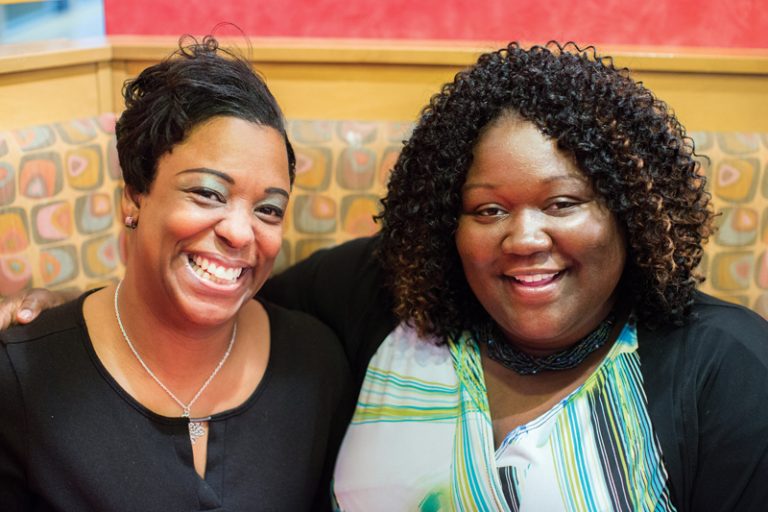 Never lease a car and pay very close attention when making online purchases. Those are two pieces of advice that Pam Taylor wishes she received when she was just starting out—particularly before driving cross-country in a car leased with a cap of 10,000 miles.

Now 51, the professional educator is sharing those tips and more with Mariedith Poquiz, 21. Taylor, of Frederick, mentors Poquiz as part of the Woman to Woman Mentoring program. The 10-month program, operated through a Frederick-based nonprofit that goes by the same name, seeks to help women cultivate new relationships, grow new skills and mentor young women.

“It is so powerful, the coming together of women,” Taylor says.

The inspiration for the program came out of a study commissioned by Frederick County in 2006 that recognized the need for a program that would provide mentoring for young women in Frederick County. Woman to Woman Mentoring launched its first class in 2009, says Tonya Hatosy-Stier, who joined the organization’s board in 2010 and began serving as executive director in 2013.

So far, Woman to Woman Mentoring has provided mentoring to more than 300 women. There typically are as many as 25 pairs of mentors and mentees per 10-month class, with two classes each year. “A lot of the women who become mentors in our program say they want to give back and wish they would have had a mentor who could help navigate some of life’s transitions,” Hatosy-Stier says.

Women between the ages of 18 and 35 years old typically are matched in an inter-generational relationship with a volunteer mentor. The pair works one-on-one and also with the larger group during “life skills” workshops.

Taylor, an educator who works in Montgomery County Public Schools, became involved with Woman To Woman six years ago after her children went away to college. She wanted to begin volunteering. She found Woman To Woman Mentoring and has mentored someone in each class since then.

Poquiz, a student at Frederick Community College, had the goal of becoming a dental hygienist, but didn’t have the resources or network to make it happen. She says her guidance counselor suggested the program. “I had no idea how to get where I wanted to be,” she says.

It was Taylor’s long-time dental hygienist who suggested Poquiz beef up her resume by spending time at the Frederick dental office. Taylor also worked with Poquiz on organizational skills and building confidence in networking.

Poquiz completed the Woman To Woman program in 2014 and is applying for a spot in the competitive dental hygienist program at Hagerstown Community College.

Three years ago as a freshman at Frederick Community College, Caroline Kinna, now 21, was referred to Woman to Woman Mentoring. “At the time I was a little lost about what I wanted to pursue,” she says. Her goal was to network and learn about different careers from the group of accomplished women.

After completing the mentoring program and a year at FCC, she transferred to Towson University for one year before enrolling at Hood College, where she will graduate in May with a degree in social work. She is planning to earn her master’s degree. “I want to help people,” she says.

She says the mentoring program was a life-changing experience for her. Kinna was matched with mentor Maria Higgins, 45, a Frederick optometrist, while workshops each month taught her skills about networking and leadership. “I’ll use those lessons throughout my life,” Kinna says.

“She was awesome and just looking for a little direction,” Higgins says of Kinna. “Through our discussions, I feel like I learned as much as she did.” They also had a lot of fun, even setting New Year’s resolutions for Kinna to take on things she had never done, such as eating sushi. The two still text and meet regularly.

“She doesn’t need me,” Higgins says. “She has it all together.”

Tiffany Green, 29, of Frederick, was a member of the most recent class to complete Woman to Woman. Green, who works at the Housing Authority of the City of Frederick, joined with the hopes of getting advice on starting her own nonprofit organization.

She started the program last April, and over the July 4 weekend she filed her articles of incorporation, establishing her nonprofit. She now is the CEO and president of Empowered to Live Inc., which offers positive youth development, community outreach and parent support.

A first-generation college graduate, Green says she hopes to help others “navigate the challenges of life” based on what she has learned along the way. Green says her mentor, Michelle Nusum-Smith, gave her the courage to start the organization. “Fear will sometimes stop you,” she says. “But I’m not alone. I don’t have to do this by myself.”

Nusum-Smith, 44, owns her own business as a consultant, trainer and coach for nonprofits. She started The Word Woman LLC in 2010 and went full-time in 2016. It was fate, Green says, that she was matched with Nusum-Smith. “A mutual connection told her she needed to meet me,” Nusum-Smith says. “When they told us who we were matched with, Tiffany started crying.”

In 2011, Alex Uphold was a single mother with no savings who wanted to be a business owner.

She had worked for five years at State Farm and wanted to be an agent when she applied to be a mentee with Woman To Woman Mentoring.

Uphold, now 31, lives in Thurmont and became a State Farm agent in 2015. “This was the biggest goal of my life,” she says.

She credits the mentoring program with helping put her on the right path—in business and in life. She has since gone on to mentor other women and now sits on the organization’s board.

When she first reached out to Woman To Woman Mentoring, Uphold says she wanted help with networking, work-life balance and becoming a business owner. Working with her mentor, Uphold developed skills to save money—enough to put toward starting her business—learned to say “no” sometimes and improved her networking skills.

She graduated from Frederick Community College in 2014 and became an agent the next year “This program really has something for everyone,” she says. “Everyone is struggling with something. And there is always someone who can help you with something.”

Woman to Woman Mentoring recently announced a new program, Mentoring Circles. The program is available for women outside of the age range for the traditional program, which is 18 to 35. The peer-facilitated group will include between 10 to 12 women, Hatosy-Stier says.

Unlike the traditional program, there is a $149 fee to participate, which covers six sessions.

The first group will began Mentoring Circles last month and the program will run through March. Hatosy-Stier says the program is designed for women in transition

“This will help women answer questions and really dive into what’s important to them and get support and put a plan in place,” she says.