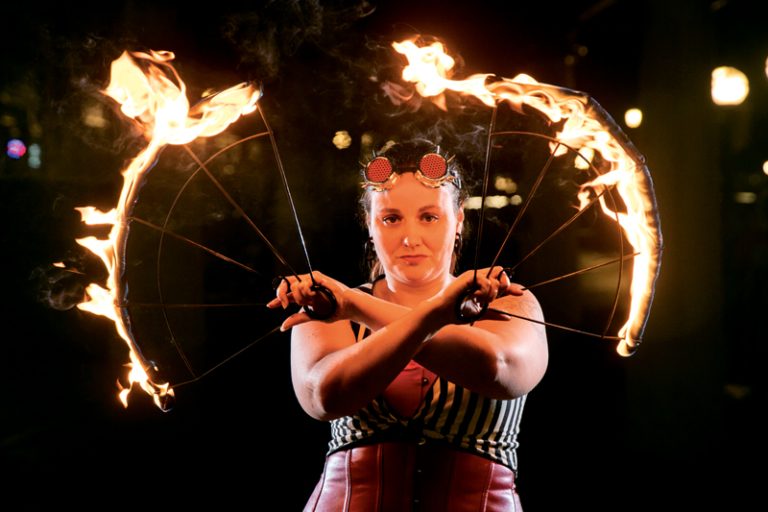 It’s a cold, wintry evening when I have my conversation with artist and fiery hula-hoopist Sue Kemp, who prefers the name Soolah hoops when performing with the Pyrophoric Fire Dance Troupe. It’s late, the wind is howling outside and talk of fire-dancing seems incongruous. But the conversation is fun and rambling and I’m learning all about a world of art and artists … and fire.

Everything about Soolah screams “artist at play.” She laughs easily, if a touch self-consciously, and is genuinely sincere when talking about what she does.

So, really … what is the deal with fire and hula hoops?

“Fire can bring damage, or it can bring beauty, and it has the power to transform us as a troupe, and the audience at the same time. That’s magic, and that’s good and it brings light into the world, and we need more of that.”

So why take it that extra step and wave it around your head and hips, mere inches from doom? Is the attraction in that tension that exists, with fire living in that place between destruction and warmth?

“Fire is tension. We love working with all the elements in our shows. We usually perform on the Carroll Creek, performing over the water, working with giant bubbles and fire, lying down on the earth, playing with fire and water at the same time. But the sound of fire when I’m literally in it shifts everything for me. Fire transforms us, and if you know how to honor and respect the fire, and work with it, it actually cleanses your whole being. We all have light within us and that light responds to the fire within each of us, and if we can help that to happen then that brings more light into the world, and we need more of that.”

Have you ever had a scary experience in your performances?

“Well, we’re all insured for fire. We’re fire safety-trained and have proper equipment and a safety protocol around in case, though we’ve never needed anything because there’s never been any kind of scary incident.”

“I started my hoop journey in 2007 when I just hooped once with a friend’s hoop. Two-thousand and eight was when it kicked in with me because I saw someone doing a performance with fire and that made me want to do the same. … I spent a lot of time practicing poi (swinging a ball attached to a length of cord) and kept hitting myself in the face with the fire. Then, I saw fire hooping at a festival and knew that was what I wanted to do.”

Pyrophoric Fire Dance Troupe performs so often that it’s difficult to get even a semi-accurate count from Soolah. “In 2016 we performed for Frederick City three or four times, including our annual show at Fire in Ice, and October is a big month for us.”

Does the troupe improvise performances, or are there themes and costumes and routines?

“I like to come up with ideas and themes for shows. In 2016 we performed a steampunk Western-themed show, which was super interesting and fun.” For the uninitiated, steampunk is subgenre of science fiction that has a historical setting and typically features steam-powered machinery or other vintage accoutrements rather than advanced technology.

“We do a lot of talking and come up with concepts and ideas. What I call the ‘Fairy thing’ is what I really love to do. That’s my milieu; where I’m most comfortable, so that’s a lot of the stuff I do. But in the case of the steampunk Western-themed show, we got together and started working out a beginning, middle and end of the story we were creating. We created a story centered on a train robbery, and just planned our look and story around the idea of this train robbery and a card game with performers playing their roles of robbers and card sharks. We even had a steampunk Xena the Warrior Princess in the show!”

The troupe often performs using artists from other disciplines. Among their favorite collaborators are the Dapper DJs, local friends and family DJs, led by Alex Sincevich, who play bartenders in the act.

Where does the Pyrophoric Fire Dance Troupe fit in the local arts scene here in Frederick?

How would you describe your own artistic outlook with this fire and steampunk and crazy stuff that you do?

“You know, it’s all about pulling people out of their everyday and giving them a unique experience. We’re always doing something different and interesting in order to immerse people in a new and unique experience that can put a smile on their face to take home with them. We want people to feel the fire, to feel the warmth as the fire whizzes past their faces!”

As an artist, what would your dream project be if money and time and distance were no object?

The answer comes fast and furious, resonating with certainty, “To create actual art and sculpture with fire in a way that people could experience.”

Soolah and the Pyrophoric Fire Dance Troupe will be performing at the Downtown Frederick Partnership’s February First Saturday—Fire in Ice on Feb. 4.