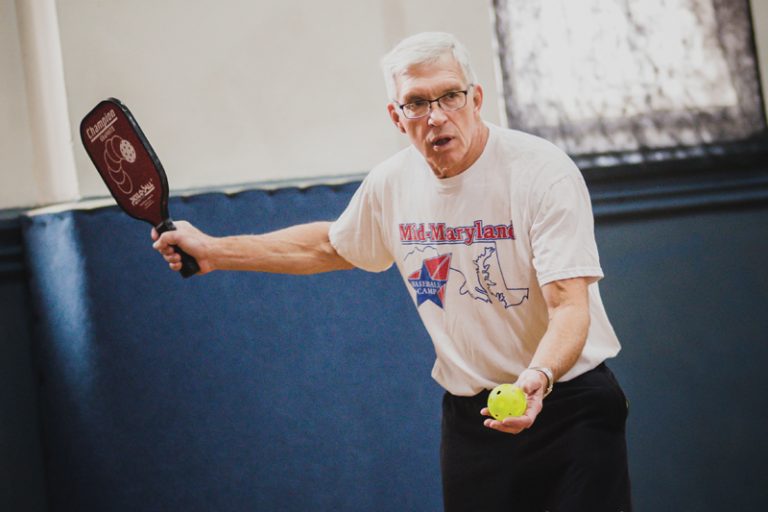 Ask any player to describe the game of pickleball, and you’re likely to hear that it’s a combination of table tennis, badminton, racquetball and even volleyball, although most folks stick to just two or three examples.

The oddly named game is a paddle sport played on a badminton-sized court with a modified tennis net. It was invented in the 1960s in Bainbridge Island, Wash., but it’s caught on nationwide in recent years, particularly among former athletes looking for a lower-impact game. The game came to Frederick just three years ago, but has developed a strong following since then, says Cheryl Radcliffe, recreation supervisor for the city. “It’s picked up really crazy,” she says. “It’s good—we needed to hit more for the baby boomers. They’re very active people; they want to keep moving.”

The William R. Talley Recreation Center hosts games three days a week on four courts, and most days have about 30 players in the game or waiting their turn. (Frederick also has courts at Trinity Woods Playground and Wetherburne Park.) Radcliffe says busier days will bring closer to 45 players, all vying for court time.

It’s a fast-paced game, but the small court prevents players from running too much, especially in doubles matches. The 20-by-44 court is easily covered in singles matches, too—volleys can feel more like table tennis, where the ball moves quickly despite the players remaining mostly in one place.

“I was sorry I waited that long to jump in,” says Ray Brown, who played volleyball competitively for more than 30 years, but switched to pickleball at the Talley Center in the last year after trying the game on the advice of a friend. “Part of it was just the process that was letting go of things that are past you. It was time to move on from volleyball—at my age and with my physical conditions, it’s hard to be competitive playing volleyball.”

Brown’s comments are echoed by many other players—that the sport is easier for them to play than most, which helps as they get older. Jim Kennedy, who came to pickleball as a tennis player, says he had a short period of adjustment moving to the shorter paddle for pickleball versus the tennis racket he was used to, but that he picked up the game quickly. “I was an avid tennis player and I hadn’t played in years,” Kennedy says. “Getting older, it’s tougher on the knees and the body. My former doubles partner was playing pickleball and said, ‘Why don’t you try it?’”

Pat Fisher first played pickleball in the ’80s, but picked up the game more seriously in the last year. Like Brown, she has a background in competitive volleyball, though she still plays regularly. “It really is fun,” Fisher says of pickleball. “A lot of people have the wrong idea about it because they feel it’s a sport for old people, but it can be as competitive as you want it to be.”

Though she has some experience with racquetball and tennis, she says the best part about pickleball is how easy the game is for new players to enjoy. “One of the things I really like about it is anyone can play,” Fisher says. “They can go in and have a good time playing without a lot of skill. You just need to concentrate on hitting the ball with the paddle.”

The only negative Fisher can point to is that as the game gains popularity, it’s harder and harder to find courts. “I wish we had more places in Frederick to play,” she says. “We play outside when the weather’s nice, but we need a senior center or somewhere to pick it up.”

Every player talks about how friendly and accommodating the other players are—there’s a regular happy hour, as well as other social events for the people that play. “I cannot believe what a great group of people this is, how nice everyone is, how accepting and warm everyone is,” Brown says. “That doesn’t mean we’re not going to play competitive and try to beat you, but we all say, ‘How did I end up with such wonderful people?’”

Kennedy appreciates the social aspect of the game, which he says wasn’t the same as a tennis player. “You play tennis, you get there early in the morning and at the end everyone goes their separate ways,” he said. “[With pickleball] there’s an average of 20 to 24 people waiting to play, and you meet people you might not have known. … It’s a group you want to be around and talk to.”

He also found that many of his fellow players were willing to help him learn the game, or work on aspects of it he’s trying to strengthen. “We have to transfer those skills to this new sport and everyone’s always willing to help me out,” Kennedy says. “People took time out of their games to help—we still do that: get a group together right before our scheduled time and practice overheads, practice lobs. We’ll give up playing time to work on skills to help each other out.”

But make no mistake, there is still plenty of competition.

“It’s nice to be around people that take the game seriously but they’re not cutthroat—the games can be cutthroat, but it’s over and done with when you’re done playing,” Kennedy says.

Brown says the competition of the games helps him keep his athletic drive alive, even when that might be a challenge in other sports. “I can learn new things, I can play on a competitive level and isn’t that fun at age 66?” he said. “That’s one of the things that attracts other people who’ve been competitive at other sports in their life. Even if you’re older, you can still play a really competitive game.”