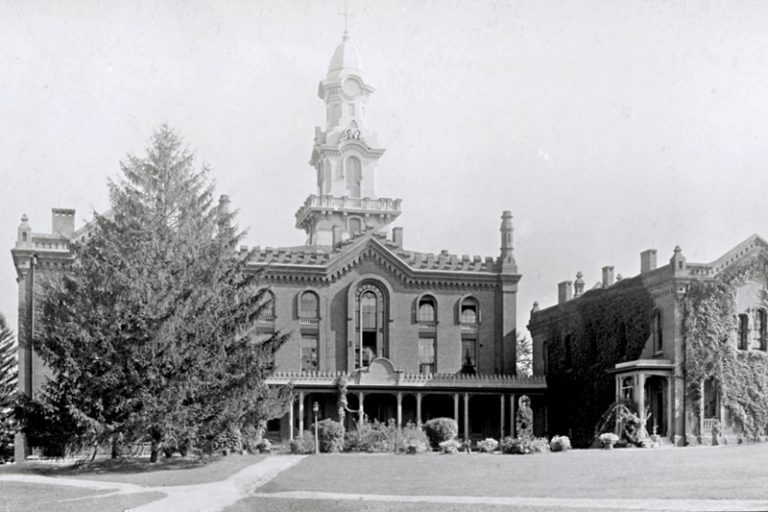 There is little doubt that many ministers of the churches in Frederick have had storied—even fabled—careers. But perhaps the greatest of these was John Johns, who came to All Saints Episcopal Church in 1819, and rose to become bishop of the Diocese of Virginia.

He graduated from the College of New Jersey, now known as Princeton University, in 1816. He remained there for three more years, two of which he spent studying theology. He was ordained a deacon of the Episcopal Church in Philadelphia on May 6, 1819, by Pennsylvania Bishop William White.

A few weeks later he was invited to preach “at old St. Thomas Church” in Baltimore, where he expected to conduct services the following Sunday. However, he was asked to travel to All Saints Church in Frederick, as that parish was without a rector. Coincidentally, he arrived in Frederick the same day as the Rev. William Meade. The church’s vestry selected the young deacon over the more experienced Meade, who would become bishop of Virginia in 1829.

Immediately upon acceptance of the call to All Saints, Johns established himself as a pious and dedicated rector, and a gifted orator. It was his practice to write his sermons for the next week on Mondays, memorize them by Wednesday and deliver them without notes on Sunday. This methodology was modified as he grew older, but he still memorized his sermons.

In 1820 Johns was ordained a priest by Bishop James Kemp in All Saints Church on North Court Street. He remained as rector until 1828 when he accepted a call to Christ Church Baltimore, a new and larger parish. Twice during his service there he was nominated at the diocesan convention to become bishop of Maryland. However, he never received the required number of votes of both the clergy and the laymen delegates. He remained at Christ Church until 1842.

That same year, Virginia Bishop Meade, Johns’ earlier rival for the rectorship at All Saints, asked for an assistant in carrying out the duties of the diocese and suggested Johns for the post. Johns was consecrated bishop on Oct. 13, 1842, at Monumental Church in Richmond.

It was in 1848 that Bishop Johns took on the added responsibilities of serving as president of the College of William and Mary in Williamsburg, Va. The college had fallen into financial disarray and a new direction was sought. Johns held that post—in addition to the requirements of his episcopate duties—until 1854. He did so without any additional salary. When he resigned, the student population had doubled.

Johns’ life was uneventful for the next few years—until the Civil War erupted in April 1861. His abilities as a “pastor” came to the forefront then. He was often seen on the battlefields in Virginia administering to the wounded and offering prayers for the dead. He also preached regularly at the Confederate’s Libby Prison in Richmond.

Shortly before the conflict began, Bishop Meade announced his intention to retire in 1862, and Johns was elevated to replace him. He would serve in that capacity until his death near the Virginia Theological Seminary, which he had advocated for throughout his ministry. He also taught pastoral theology and homiletics there.

There is evidence that Bishop Johns baptized and confirmed Robert E. Lee into the Episcopal Church. Interestingly, another former rector of All Saints, William Nelson Pendleton, conducted the funeral of Lee in the chapel at Washington College (now Washington and Lee University) in Lexington, Va., on Oct. 15, 1870.

Though he was constantly concerned with this pastoral duties, Johns found the time to have a personal life. His first wife was Julianna E. W. Johnson, the daughter of Baker Johnson, the brother of Maryland’s first governor, Thomas Johnson. They were married Nov. 20, 1820. With her he had five children. Julianna Johns died sometime before 1836, but no exact date or place has been uncovered. Johns then married Margaretta Jane Shaaff of Georgetown on July 17, 1838, and the couple had one child, Arthur Shaaff. He also became an Episcopal priest and served a Rockville church for many years. After Margaretta’s death, Johns married a Mrs. Southgate, a widow from Norfolk, Va. They had no children.

Bishop Johns suffered an “attack of paralysis” just weeks after delivering his last sermon in late February 1876 in the chapel of the Virginia Theological Seminary. He died April 4 at his home “Malvern” near the campus in Alexandria. He was among the first to be laid to rest in the cemetery of the seminary.