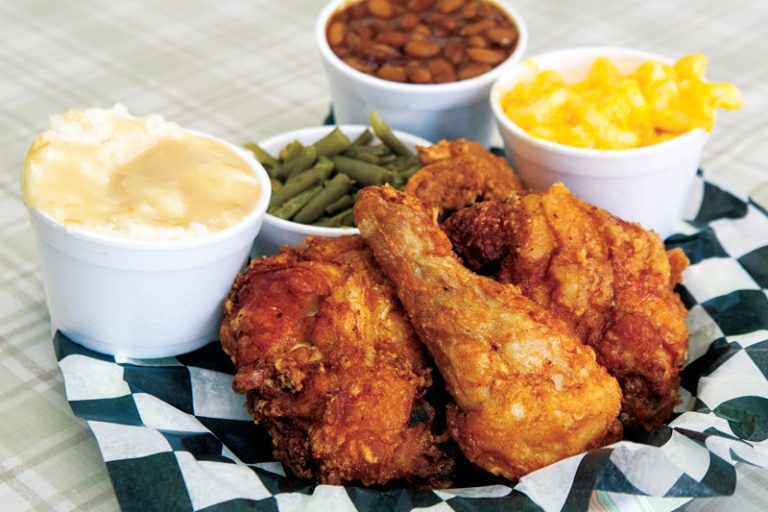 Watson’s Carry-Out in Jefferson Carries on a Family Tradition

If you are lucky enough to pause at Jefferson’s one traffic light, where Lander Road becomes Holter Road at Jefferson Pike, roll the windows down a crack. Even in winter’s chill, the rich aroma of fried chicken wafting from Watson’s Carry-Out is a heady pleasure.

Those deeply savory notes pique the taste buds, conjuring memories of grandmother’s kitchen and Sunday dinner. Denizens of “old Frederick” will remember the name and scent from Watson’s Family Restaurant, formerly on West Patrick Street. The place consistently racked up popular votes in the “Best of Frederick” fried chicken and family restaurant categories until it closed in 1999. Now Watson’s hearty, home-style fare is winning new fans with every bite.

This time it’s founder Drainie Bergen “D.B.” Watson’s baby girl, Carol, and husband Roy DeGrange at the helm—churning out batches of their “famous” fried chicken, signatures sides, tender cornbread and homey specials. A portrait of D.B. presides over the counter, assuring patrons that this is, indeed, an authentic revival.

The elder Watson moved his growing family from Baltimore to Frederick in the mid-1950s and worked for a local bread manufacturer. By 1964, he started his own company, Home-Del, delivering ice cream door-to-door to farms and families. Business was good. He expanded, opening a deli-style convenience store on West Patrick Street, China Garden’s current site. Roy, a Frederick native, remembers cruising the circuit around town as a child in his father’s truck, enjoying takeout dinners of “sloppy subs” from Watson’s, loaded with fresh toppings and oozing mayo, on the one night a week when his mother didn’t cook.

The 225-seat Watson’s Family Restaurant opened in 1968, with fried chicken as the established headliner. There, a family of four could enjoy a chicken dinner for less than $5. The Watsons added catering and an ice and beverage company to their repertoire, as sons Charles, Dennis and Billy took the reins. Carol, the youngest by 10 years, worked the serving floor beginning in high school. An anchor of the local dining scene, Watson’s fed the masses and employed a generation of Fredericktonians.

GOOD FOR THE SOUL

Gone since the last millennium, Watson’s nostalgic fare remains a good memory for most former patrons. It is a taste of youth and yore—unctuously juicy meat under crispy browned skin, hefty potatoes with real butter and silky cream, and the raw crunch of sweet cabbage in piquant dressing—that has people so excited to check out Watson’s newest incarnation.

During the scant two months since opening the Jefferson location, Carol, Roy and their staff of eight have been in constant motion. Customers chat in an undulating line while waiting for two old-school Henny Penny pressure fryers to give up the next piping hot batch of golden goodness. Those in-the-know whisper advice to newbies perusing the menu: “Get the chicken.”

There is no rushing the process. Roy says, “The best way to do chicken is to marinate it overnight before giving it a light dusting of seasoned coating.” It takes 25 minutes to cook 60 to 70 pieces of the signature specialty. On a busy day, Watson’s will serve 1,200 pieces. Most of it comes from Hillside Turkey Farms in Thurmont, the same as D.B.’s custom “back in the day.” Beef comes from Hemp’s Meats down the street.

The familiar menu lists salads, subs (including Roy’s favorites, the steak and cheese and cheeseburger-filled), small-batch soups and gourmet wraps, such as the California Club. That’s grilled chicken and bacon with avocado ranch dressing on a sundried tomato flavored tortilla. Wraps can be made gluten-free. There’s even a veggie burger. Sides command their own fandom. Baked beans are made on-site, having bathed in brown sugar, tomato and spice for three hours until they turn a deep brick-brown. Carol transforms mounds of cabbage into finely minced coleslaw every day, per the family’s recipe. Macaroni and potato salads, country-style green beans, starchy limas, and macaroni and cheese are also options. Daily specials showcase other family favorites. One week, slow-simmered pot roast and pulled pork barbeque may make an appearance. The next, it’s fish fry or fajitas. Roy’s blue eyes dance and he drawls, “My wife makes goooood lasagna.”

The Watson-DeGranges are no strangers to 14-hour days or high volume production. They’ve participated in Frederick’s 4th of July celebrations and In the Street festivals as Roy’s Concessions for years, as well as events at the fairgrounds and throughout the region. Their road-ready repertoire ranges from crab cakes for a fishing expo to shepherds’ pie amid bagpipes and Scottish games to sizzling ribs by the thousand. Roy’s looking forward to making a few of his Celtic festival faves as St. Patrick’s Day specials. Come summer, he’s planning pit-beef and barbeque.

The Bakery at Watson’s has its own ace in the hole. Baker/manager Gayla Stockman owned Maggie’s Custom Bake Shop in Middletown (by appointment only) before blending operations with the new establishment. She learned her sweet art at the elbows of her mom and aunts. She worked with them at their family’s restaurant, The Dan-Dee Country Inn, another of Frederick’s bygone icons. Now she creates Watson’s treats. Carol  DeGrange is a childhood friend.

“Like a sister,” gushes Stockman, whose signature contribution is the peanut butter pie. It’s a velvety wedge of sweet, nuttiness on a crumbly graham crust, drizzled with chocolate. There’s always a different cake and pie of the day to go with homemade cannoli and candies. Custom orders are available.

Roy says they are happy and humbled by the community’s response. “We intended to do a quiet opening, but social media made this place blow up the first day.” He’s already considering adding a third fryer. He smiles broadly, “You can’t feed everybody all at once, but we’re gonna try.”