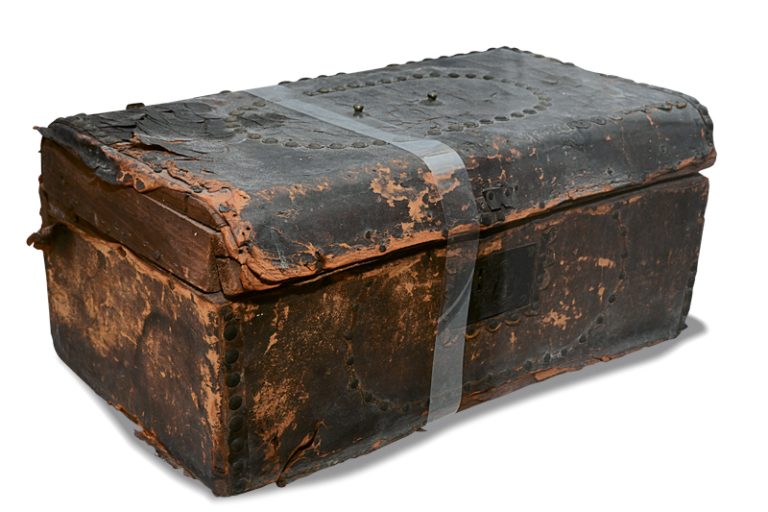 February is a popular time for people to travel when they want to enjoy a warm place to escape the cold. In preparation for these trips, it’s often difficult to pack appropriately when it’s sub-zero outside. But if we forget a bathing suit, we know that we can likely pick one up when we arrive at our destination.

In moving to another country to live permanently, however, packing is a great challenge. What would you take with you? What would you leave behind? Since the time of European settlement, Frederick County has been home to many immigrants who had to make those difficult decisions. Sixty percent of the colonial settlers were British, and the remaining 40 percent were mostly German.

Philip Jacob Grundler, born in 1702, was an immigrant who left Ostelsheim, Germany, and settled in Frederick with his family in 1754. His trunk was donated to Heritage Frederick by a descendant, Willard Markey, in 1962. It gives us a tantalizing clue about Grundler but leaves us with more questions than answers. The trunk is made of leather and is decorated inside with wallpaper. It is small enough to be tucked under an arm. Possibly Grundler kept it with him at all times during his travels to America. What would he have packed inside? Perhaps he carried in it some of his most precious possessions. These might have been a Bible, important family documents, a watch, other jewelry and money. Unfortunately, we can only guess as to its contents. We know more about his granddaughter, Anna Catharine Hummel Markey Garnhart (1773-1860), who is said to have been one of America’s most talented quilters from the early 19th century.

Grundler’s trunk and other historical objects are on view at Heritage Frederick, 24 E. Church St. The museum is closed through February for building maintenance but the organization will be participating in Downtown Frederick Partnership’s Fire in Ice program on Feb. 4. Beginning March 1, the museum and library will be open to the public with new hours: Wednesday through Saturday, 10 a.m. to 4 p.m., and Sunday, 1 p.m. to 4 p.m. For details, call 301-663-1188.