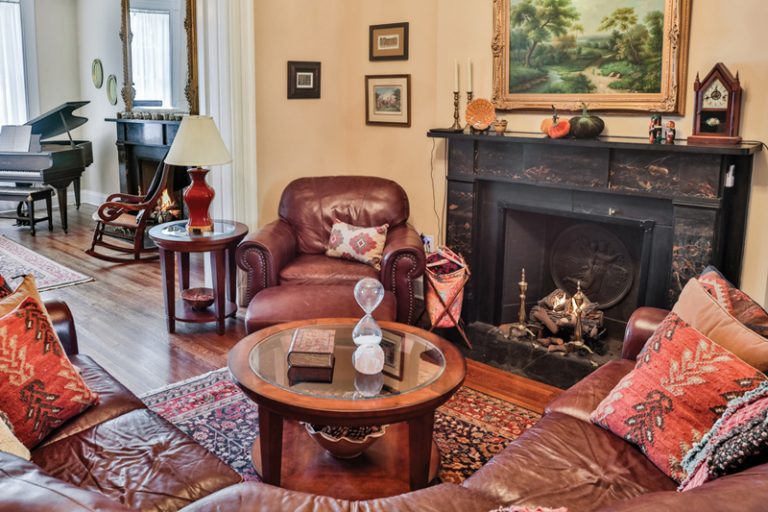 Number 117 may have the lowest roofline on Record Street in Downtown Frederick. But one glimpse inside the front door and any preconceived notion that it’s the least-significant house on this historic block behind City Hall is quickly dispelled.

The first telltale sign is the staircase—a graceful period beauty that seems to soar to the attic floor. An ivory mortgage button adorns the newel post (more about that later), and from the landing a short set of “nursery” steps leads to the back section of the second floor. Notable, too, are the high ceilings, generous trim work and, overall, an undeniable stateliness. It’s almost as if time stood still, circa 1825, when the house was built.

What thrilled current owners Linda and Jeff Jones about the house when they first toured it with their real estate agent in 2011 was that time virtually had stood still. In the 186 years since its construction, the house had not been altered in any substantial way. It was architecturally intact inside and out.

In researching the residence’s history, Linda Jones discovered that the Record Street Home next door owned it briefly in the late 1800s. It sold for $4,500 in 1895. Cyrus Gambrill Sr. acquired the house around 1930, and after his death his son Cyrus, Jr. lived there. The Joneses bought it from the son’s children and subsequently began a comprehensive, year-long restoration that later earned them the 2012 City of Frederick Preservation Award.

The couple continued to live in Montgomery County while the major work ensued—starting with bottom-to-top HVAC, electrical and plumbing improvements completed under the oversight of Jeff Jones, a builder by profession. The Joneses moved into the house in 2012 along with their four now-grown children.

Today, the home exudes a warm, comfortable and personal ambience that accommodates their family’s 21st-century lifestyle. Yet its intrinsic dignity has not been sacrificed. Whenever they could—and it was often—the Joneses retained existing hinges, door knobs and other hardware throughout, repairing and polishing as needed. Missing ceiling fixtures were replaced with period chandeliers Linda Jones discovered while she roamed Downtown antique shops.

Following the rise of the aforementioned staircase hang photographs of six generations of family members. Linda Jones snagged them from a sister-in-law (with permission) and had them resized and framed. Only one in the collection is in color; it is of Jeff Jones’ mother as a young girl dressed as a Mardi Gras princess.

A massive gilt mirror presides over the fireplace in the front parlor. It’s literally bolted to the wall, which Linda Jones believes indicates it has been part of the décor for many decades. She cleans the mirror with special care to preserve the fragile gilt work.

A grand piano that belonged to Linda Jones’ grandmother, and on which the Jones youngsters learned to play, stands in the light of the tall front windows, which like the other windows in the house are original. In the adjacent back parlor, a working jib window opens to the patio. “Fraternal twin” marble fireplaces—one slightly larger than the other—warm the two rooms. The Joneses reclaimed the fire backs from the attic.

Although the bay window in the dining room does not date to 1825, it’s a long-ago addition. The crystal sconces flanking it are another attic find. To disguise extensive water damage, the owners added molding on the ceiling and above the fireplace to complement existing trim. Hidden under the table is a foot press for a servant’s bell. For lack of servants, the Joneses don’t use the bell except for fun. However, Willie, the wild-and-crazy family dog, has been known to step on it by accident.

Despite their emphasis on restoring rather than remodeling, some things simply had to be brought into the present day. The bathrooms, for instance, were antiquated. The kitchen, which had been gutted in 1944 and not touched since, underwent a thorough modernization. It now offers every contemporary convenience and stylish finish, yet succeeds in venerating the home’s considerable age. Tole trays hang on the kitchen stair wall. An original Dutch door opens to the patio.

The mudroom, once likely a summer kitchen, features the home’s third and narrowest staircase as well as a rustic built-in cabinet that the Joneses have painted. The area above this room may have been servants’ quarters.

Despite having a well-appointed kitchen, Linda Jones admits she doesn’t cook as often as she used to. These days she’d rather dine Downtown. “Whatever you’re in the mood for, it’s available” within walking distance at one restaurant or another, she says.

One of the couple’s favorite pastimes when the weather is good is to sit outside the North Market Pop Shop, lick ice cream cones and “watch the people walk by.” Linda Jones also creates with clay in her basement pottery studio and plays mah johngg with a group of friends.

Then there’s the job of keeping up with Willie the dog, whose “real father” (one of the Jones offspring) lives in Salisbury. Should you pass by the side gate to 117 Record Street some day and spot a large, extremely affable dog peering out at you, say hi to Willie. He’s sort of the street mascot.

Now, let’s get back to the mortgage button. According to legend, it was a Nantucket tradition dating from the 17th century to bore a hole in the newel post, place one’s mortgage documents (or their ashes) in the opening and cap the hollow with a “whalebone” or ivory button to signify that the loan had been paid off. Naturally, Linda Jones had to know whether the ivory mortgage button in her newel post hid anything important. So one day she pried it up and found … nothing.

Apparently, architectural historians have failed to unearth any records of salvaged newel posts containing ashes or mortgages. Further, mortgages as we know them didn’t exist until the 1930s. The buttons were probably just a decorative way to hide the joinery in the newel post’s construction.

Not to worry. Linda thinks it nevertheless makes a great old story to go along with a great old house.