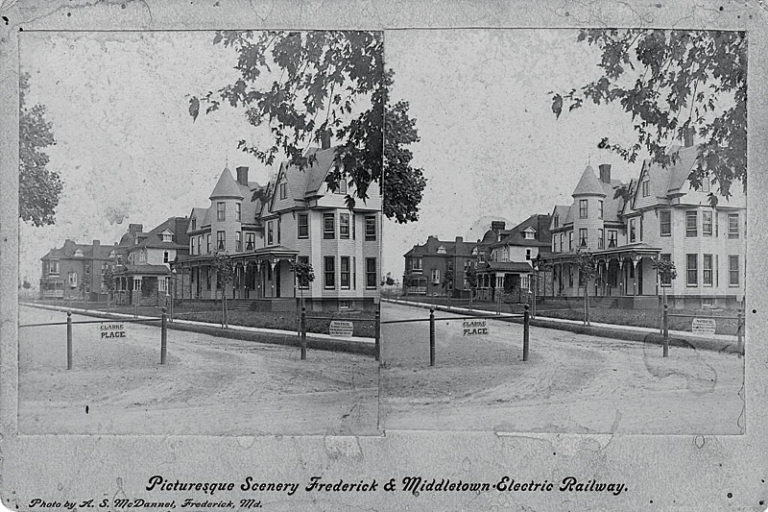 Before the Xbox, there was the stereograph. Also known as the stereogram, stereoptican or stereo view, the stereograph emerged as state-of-the-art entertainment in the late 19th century. Placed on cardboard were two almost identical photographs, side by side.

When viewed through a stereoscope, the merged image appeared three-dimensional, quite an illusion for that era. The popularity of stereographs waned with the rapid innovations in the entertainment industry, but they found a niche in the second half of the 20th century with View-Master disc viewers.

This particular image, taken around 1908, shows Clarke Place, the block of ornate Queen Anne-style homes that still borders the Maryland School for the Deaf. The stereograph appears to have been part of a series of scenic images produced by the Frederick & Middletown Railway, an early trolley and interurban rail service in Frederick County.

Clarke Place was named for James C. Clarke, well-known in the local and national rail industry, on farmland owned by Dr. Bradley Tyler. The property was later owned by Harry Bowers, who built the first house in 1894. The sign hanging from the railing was placed at the locked entrance to the then-private street. It read: “NOTICE: The enclosure is private property. None but pleasure vehicles allowed here. Dogs must stay out.”