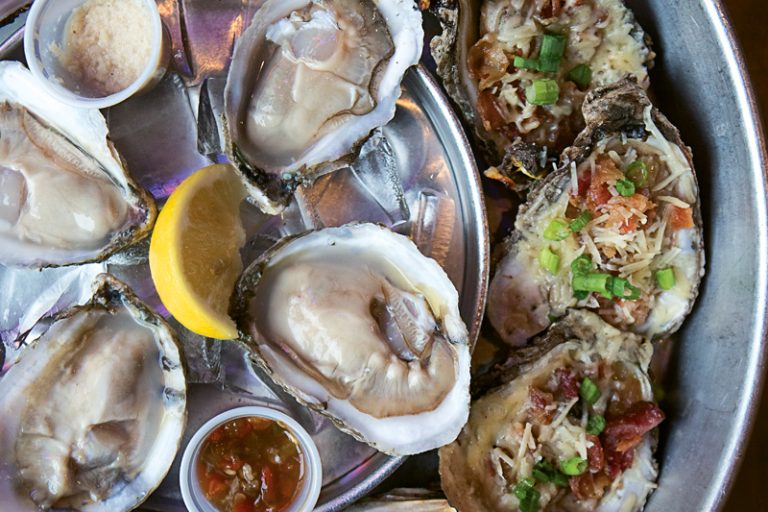 If you can’t be a snow bird, at least you can eat like one. While brief sun and crisply cold nights stir thoughts of flannel PJs and cocoa at hearthside, there’s always a wisp of nostalgia for summer. Flip-flops or snow boots, the play of seasons gives us a reason to expect something good just around the corner. And if you can’t wait for the calendar to catch up with a yen for beachy vibes, the Shuckin’ Shack Oyster Bar on Market Street in Downtown Frederick could be your oasis.

Co-owners and childhood friends Wade Newman and Eric Weller opened the place just over a year ago at the site of the former Griff’s Landing. Part of a budding Wilmington, N.C.-based franchise chain, it replicates the original Shuckin’ Shack’s aura, with touches of old Frederick. Vintage surf boards and model sharks hang below a stamped-tin ceiling, while the streamlined menu  packs in fresh seafood choices like blackened fish tacos, Low Country boils and, of course, mountains of meticulously sourced shellfish. Diners can choose from crab legs, clams, mussels, calamari or gulf shrimp prepared to order, as well as fish like tuna and cod.

The Shuckin’ Shack’s whole chicken wings (with drum and flat pieces attached) are popular, too. These and bags of oysters, their signature bi-valve, are delivered daily.  “If we want to change it up,” says Newman, “we give our supplier a call the night before and the next day we have something new. When we say fresh, we mean fresh every day.”

As for the adage about only eating oysters during months with an “R” in them, Newman asserts that modern refrigerated delivery systems make that barrier a thing of the past. The other possible reason behind the advice is that oysters simply taste better during the winter. They thrive in cold but spawn during summer months, which can give them a weak and watery flavor. The Shuckin’ Shack’s supply follows the seasons up and down the coast, allowing connoisseurs to sample a variety. Fans might find Chincoteague and James River oysters from the Chesapeake Bay or the plump Salt Grass variant out of Canada’s Malpeque Bay on Prince Edward Island. There are five species of oysters and several hundred varieties around the globe. “Chincoteague and Salt Grass are a little brinier,” shares Newman. “White Stone and James River varieties have a clean finish with less salinity. … [Salt Grass] are probably the best oysters I’ve ever eaten.”

Enthusiasts liken the subtleties of taste between types of oysters to the assorted grapes used in wine. Wine’s concept of “terroir,” being able to taste the influence of soil and sun on a specific vineyard’s product, becomes “merrior” for these mollusks. Their flavor differs with geography. Salt and other dissolved minerals, water temperature, even cultivation methods, affect the taste. Expert Rowan Jacobson’s book A Geography of Oysters and his web site, OysterGuide.com, are notable resources for newbies and devotees alike. Online visitors can fill out an oyster-eater profile to find the best matches for their palate or study interactive maps of North American oyster regions and appellations. Then the exploration can continue with one of the Shuckin’ Shack’s customized sampler plates.

The Shuckin’ Shack’s oysters may have a pedigree, but the restaurant is eat-with-your-fingers casual. Matt Piccinin and his buddy, Sean Cook, started the original family friendly restaurant in 2007, quickly developing a core of friendly regulars, including Weller’s dad, Gary Weller, a former Frederick resident who travels to the Carolina beaches every year. Eric Weller quotes his father, “He always said,

‘If I ever opened a place, it would be like [Shuckin’ Shack] because it’s a fun, down-to-earth environment.” Newman and Weller had the same thought brewing. The duo, friends since playing baseball together at age 10, dreamed of opening their own independent bar near Nationals Park in Washington, D.C.

When Gary Weller learned about Shuckin’ Shack’s plans to franchise its concept in 2014, he prompted the connection. Eric Weller continues, “It was a perfect fit: uncomplicated, low overhead, smaller staff, more personal. … It’s every man’s dream to own a bar!” The partners were the first to sign a franchise agreement. Then they spent most of the next year looking for the right place. They considered Charlotte, N.C., near Newman’s college alma mater, but chose Frederick for its historic charm and proximity to family. Getting in on the ground floor has benefits, too. “We personally know everyone involved in making decisions,” Weller says.

Piccinin visits Frederick a few times a year. He says he loves the layout and the character of the historic building, which dates back to the 18th century. “We try not to be the cookie-cutter franchise. If you visit every store we have open [10], each has its own eclectic feel,” he says. The back of the house runs like a corporate restaurant for consistent quality, but franchisees have leeway to make the business their own, experimenting with cocktails or entrée specials, such as crabcakes and crab fries that the locals here love, and decorative additions.

“We prefer historic, downtown buildings,” says Piccinin, noting that other chains are traffic-based. “You find them along interstates. We like to dial into the community and be a part of it.” In that vein, Newman and Weller look forward to participating in Frederick’s “Fire in Ice” celebration that will take place throughout Downtown on Feb. 4.

Newman, Weller and Piccinin share enthusiasm for the future. “We are currently looking for a second location to open within the next year,” says Newman, mentioning a radius that includes Bethesda and Ellicott City. “We’d like to open a few more.”

Piccinin, whose favorite dish is the peel-and-eat shrimp, says the company’s healthy growth is satisfying. “Look where we’ve been in just nine years.” Even with a bar as its centerpiece, he insists that, beyond naturally delicious seafood, the Shuckin’ Shack’s community-friendly focus sets it apart. “We have 40 locations on the books to be opened and we plan on opening every one of those.”

Sun or snow, Weller promises, “You’ll have a good shuckin’ time. You can count on that.”