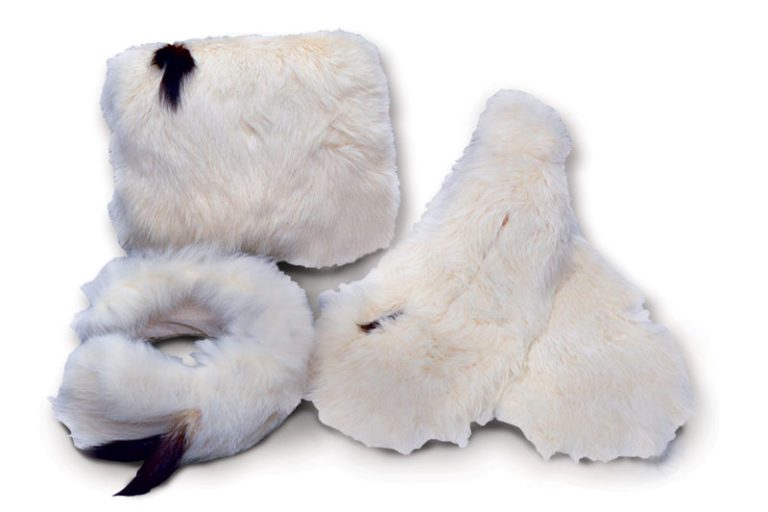 Dressing warmly for winter can be a challenge, but the little girl who wore this outfit did it in style. Elizabeth Molesworth received this fur set as a Christmas present when she was 6 or 7 around 1952. The ensemble includes a muff, earmuffs and a “boa” or scarf. A tag inside the muff has a company logo: Douglas of California.

The outfit was quite fashionable for its day. The muff is essentially a tube made of fur and lined with fabric, with openings on both ends to allow hands to go through to keep warm. The style dates back hundreds of years but enjoyed brief popularity in the mid-20th century. The scarf and the earmuffs completed the picture of warm-yet-elegant apparel.

Adding to the impressive stylishness of this outfit is the type of material used. The white fur with black accents is ermine, the winter coat of the stout, a type of weasel. In the winter months, the stout’s coat turns from brown to white, with the exception of its tail, which remains black. Clothes made of ermine were costly because they required many pelts, and because ermine could be obtained only in winter. Centuries ago, in Western Europe, clothing made of ermine was worn

by royalty and was a sign of wealth and power.

Fast forward to the 1950s, and ermine was still considered to be an extravagance. Elizabeth was raised by her parents, Thomas and Mary Molesworth, and the fur set was given to her by one of her aunts, Harriet Milbourne. Milbourne was living in Baltimore, having moved there from Frederick when she was married, and was working at the Peabody Institute, the music school of Johns Hopkins University. According to Elizabeth, who still lives in Frederick today, Aunt Harriet was exposed to a more cosmopolitan lifestyle in Baltimore and had access to luxury items such as these.