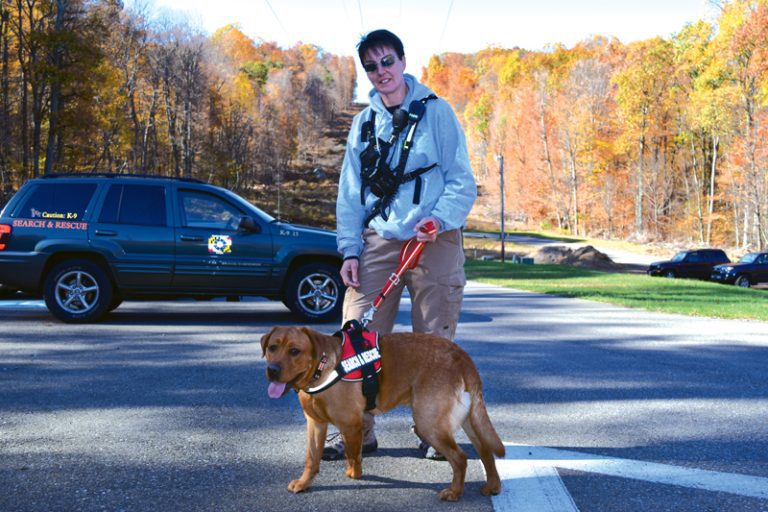 Bentley, a black Labrador retriever mix, was just two days away from being euthanized. He had been dropped off at a Martinsburg, W.Va., shelter on a Thanksgiving weekend more than a decade ago, and a couple months later his time was pretty much up.

Frederick resident Kurt Hornicek had been involved in the area search and rescue scene for many years. In 2001, he joined Western Maryland K-9 Search and Rescue, a not-for-profit organization of professionally trained and certified volunteers and animal partners to find lost persons in wilderness and urban environments. When Bentley was dropped off at the animal shelter, Hornicek’s partner was a German shepherd named Sierra. But because Sierra was getting close to retirement (in 2009) Hornicek began looking for a new partner to train, and a friend who volunteered at the Martinsburg shelter encouraged him to look at Bentley.

After putting down “$25 bail,” a new partnership was formed and the two have been training and working together ever since. Bentley “knows when I turn off of a road to go to a training area or we are headed to a search,” says Hornicek, who is a leader in the search-and-rescue organization. “He starts barking and carrying on. He is so excited. I joke that if he had opposable thumbs and could drive … he [wouldn’t] need me. Literally, I just let him do his thing. He is so driven. He does it all for a toy and praise. He does not play around the house. He only plays as a reward when he makes a find. It’s kind of crazy. He’s been really great.”

On a recent weekend, the organization hosted a training event with multiple law enforcement and volunteer agencies from across the state at Cunningham Falls State Park in Thurmont. About 100 participants took part in courses like canine first aid, human remains detection and lost person behavior awareness. Two staged scenarios brought groups out onto the trails: Searchers worked to locate a missing youth group during evening hours, while a father and daughter were said to be lost during the day. “There is an old saying that ‘volunteers practice ‘til they get it right and professionals practice ‘til they can’t do it wrong,’ so this is a combination,” says Michael Zabetakis of the Maryland State Police Special Operations Division, which manages search and rescue efforts. “The professional law enforcement people, they don’t work every day with the volunteers and the volunteers don’t work every day with the law enforcement agencies, so it is always good to get everybody together and make sure that we are all on the same page” when actual rescues are necessary.

There are 15 members of Western Maryland K-9 Search and Rescue’s team, which are on call at all times. Hornicek says the organization averages about a half-dozen calls for service a year, mainly for lost persons, usually young people or those with mental health conditions. Some calls involve overdue hunters or lost hikers. “You just never know when you are going to get a call,” Hornicek says. “You think everything is quiet … [and] the next thing you know you are out until 3 o’clock in the morning and then you have to go to work the next day at 5.”

The team, whose members all have full-time jobs or commitments outside the group, does not host fundraisers but takes donations through its website, www.westmdk9sar.org. You’ll often find team members at community events, Boy Scout and Girl Scout meetings, or at local library branches giving talks about the Hug-A-Tree program. “We teach kids of all ages what to do if they become lost,” Hornicek says. “The bottom line is stay put. Hug-a-tree and it makes it much easier to find you.”

Alyssa Vance of Frederick has been on the team for about two-and-a-half years. First, she went to a couple training sessions to decide if she wanted to join. “It was really the people that made the biggest difference” in her decision to join, she says. “They were fun, easy going and willing to teach a new person that didn’t have any experience and just went from there. I’ve loved every minute of it. I’ve learned a lot and it’s opened up a whole new world for me.”

Boonsboro resident and team member Ann Frank has always liked being out in the woods with her dogs. “I just wanted to find a way to do that, but also be useful, so that’s what led me to search and rescue,” she says. Her two dogs, Bogan, an Australian cattle dog, and Quick, a border collie, are both in training for the team. “My border collie actually ‘scent checks’ my clothing now, so whenever I am putting a pair of pants on he runs up and quickly scent checks it,” she says. “If it’s work clothes, I get one reaction. If it’s jeans, I get another. If it’s these [uniform] pants, he’s extremely excited and I have to put him in the truck and I have to take him somewhere. I basically have to sneak out of the house if I am getting in uniform and not taking my dog.”

Becky Rogers of Thurmont joined the team in 2007 with her chocolate Labrador, Rocket, who died in 2015 after a battle with cancer. She is training her 1-year-old English Labrador dog, Rossby, to be part of the team. She brought him home at eight weeks and began training the next week. She estimates he needs about six more months of training. “He has really caught on quick,” Rogers says. “He’s bred to work so he’s a fast learner.”

Team members must go out in all weather, including heat waves, snowfall and torrential downpours. Many are driven by their desire to help others. “There are such small groups of people that are willing to go out and risk our lives, our animals lives, in foul weather, in horrible terrain to find people that may or may not still be alive or may be injured and really in need of help,” Frank says. “I think having more people on the ground that are willing to volunteer their time is paramount and I’m happy to be a part of that.”

Rogers says she loves the excitement of being able to help someone in crisis. “We have a resource that we are able to offer that not everybody offers,” she says. “You have a lot of fire departments in the area. You have a lot of ambulance companies but you don’t have a lot of specialized canine teams, especially in Western Maryland. West of Frederick County we are the only team. There is a lot east of us but we are it for Frederick County, so we really just enjoy being able to help people.”

Hornicek says he doesn’t mind winter, although summer can be a bit tough—he just enjoys helping others. “You are doing something really good,” he says. “It’s not something that everybody can do or wants to do. For us, we are a very tight team. Just working with people you know and doing stuff like this, it’s like a search and rescue community. You become a part of something bigger than yourself and then you get hooked.”